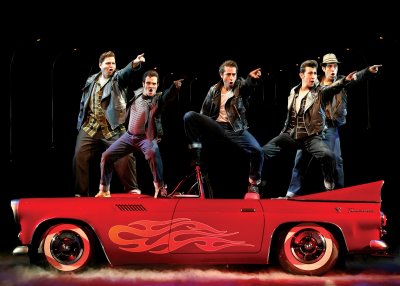 Choreographer-director Kathleen Marshall’s revival of Grease brings back the magic of Rydell High; however, it fell short of my expectations. The music is contagious, the choreography is energetic, and the supporting performers have great comic timing. The lead characters, though, fall flat. Still, from start to finish there’s a fun atmosphere at the Orpheum. There’s even an appearance by American Idol winner Taylor Hicks as “Teen Angel” (Wednesday through Friday only) and an entertaining pre-show with DJ Vince Fontaine, who warms up the crowd with hits from the 1950s, gains audience participation with some classic dance moves, and even pokes a little fun at Coon Rapids. This production of Grease is not the best I’ve seen, but it’s a fun show and well worth the ticket price.

Grease tells the classic story of good-girl-falls-for-bad-boy. Danny Zuko (Eric Schneider), leader of the Rydell High T-Birds, is the epitome of the 1950s cigarette-smoking, leather-jacket-wearing James Dean persona. Danny meets Sandy Dumbrowski (Lauren Ashley Zakrin), the innocent, fresh-faced Sandra Dee archetype, over the summer, and romance ensues. Both assumed Sandy was returning to her home town at summer’s end; however, plans change and Sandy is now the new girl at Rydell High.

The story follows the two as Danny tries to stay cool even while dating the good girl. Sandy doesn’t know what to make of this new version of Danny and runs into her own set of problems while attempting to fit in with the Pink Ladies, the opposing female version of the T-Birds. Both gangs have hilarious and talented members who create solid side stories to bolster the plot line—from a beauty school attendee who can’t seem to mix the dyes right to a hot-rod-loving gear head who creates “Greased Lightening.” This cast of characters provides for continuous entertainment throughout the 2 hour and 15 minute run time.

The timeless music of Grease did not fail to entertain. It is wonderful to see a pairing of the original Broadway hits by Jim Jacobs and Warren Casey combined with hits from the 1978 film such as John Farrar’s “Hopelessly Devoted to You,” “Sandy,” and “You’re the One that I Want.”

The choreography is fun and dynamic. The cast’s vocal ability is impressive, especially the female leads. Standout performances are given by Bridie Carroll (Jan), Will Blum (Roger), and Brian Crum (Doody). Their comedic timing and strong vocal talents inspire a lot of laughter throughout songs such as “Mooning” and “Those Magic Changes.” An honorable mention can also be made for Hicks’s smooth crooner voice and playful demeanor. He’s a bit awkward, yet engaging at the same time. Many of the lead performers, including Schneider and Allie Schulz (Rizzo), are just average.

“Grease” is still the word: I am still humming the show’s tunes! It fell short of my expectations; however, I still enjoyed myself. I would recommend attending the show and getting there a few minutes early. Vince Fontaine is worth your time and will get you in the Rydell High spirit!

Correction: Sandy was played by Lauren Ashley Zakrin, not by Emily Padgett as this article originally stated.