“Take a Swedish fish. That’s your ticket, but it’s okay if you want to eat it. The program is written on the wall. Enjoy the show!” Welcome (back) to the world of the Cat Fish, where this weekend’s prizefight pits Fanciness vs. the Void.

Before continuing with this review, I should disclose that several of the people involved with this production are friends of mine—but if you see the show, you’ll understand that a puff piece is not what the Cat Fish (writer Savannah Reich and director Samantha Johns, who appear onstage, in this show, as singing fish) want from me, you, or anyone. Fanciness vs. the Void is a bracingly confident show, so much so that if I wrote something glib and boosterish about it, I’d fully expect to wake up with a dead fish stuffed in my mouth. (I guess I could donate the slimy little corpse to Mad King Thomas, who will need a supply of them next weekend.)

Fanciness vs. the Void is set on a boat, which will be departing next week for an east coast tour. (It’s technically a set depicting a boat, not to be confused with the actual boat that is touring this summer carrying a completely different show.) Confined to the boat at sea are Finn (Jonathan MacGregor Cole, who’s also been billed as Jon Mac Cole, Jon Cole, Jon Mac, and every other permutation of his name), Valentine (Paige Collette), and Louie (Carly Wicks). They’ve been there for over a year, having embarked for unspecified but dire reasons and entirely uncertain about the possibility or desirability (there are vague intimations of apocalyptic circumstances) of ever returning to land. They suddenly find themselves joined by Deg-Man (Brandon Ewald), a frightened and primitive character who speaks in nonsense phrases that sound almost like recognizable brand names. (Imagine David Byrne talking huskily in his sleep.) Deg-Man’s presence upsets the trio’s delicate balance, offering promise and danger both physical and emotional.

The loose collective of friends and collaborators seen in productions by Cat Fish, Four Humors Theater, and sundry Bedlam entertainments—those onstage in Fanciness plus performers including Tom Lloyd, Alisa Mattson, George McConnell, Jason Ballweber, and others—share a trust, respect, and longstanding familiarity that gives all their shows a distinctively fertile chemistry and is absolutely essential here. We need to believe these three have been on this boat together for a long time, and the comfort with which Cole, Collette, and Wicks crawl over each other (and scream at each other) is not the kind of thing you develop in a few weeks of Tuesday-Thursday after-work rehearsals. Like previous Reich/Johns collaboration Dalí’s Liquid Ladies, Fanciness has a physicality so raw it will make you uncomfortable. You can’t help getting wet on Thunder Canyon, and just as surely, you’ll be squirming in your seat at Fanciness vs. the Void.

What made Dalí’s Liquid Ladies my favorite play of 2009 was the way it combined a beguiling texture with genuine emotion and an intellectual ambition that was serious enough that it didn’t need to declare itself with trumpets—everything came together naturally and seamlessly. That happens here, too. The show, which runs just over an hour, is loaded with small delights and enjoyable moments that are diverse as they are numerous. As the characters pace, roll, and crawl around the creaking, convincingly claustrophobic boat designed by Lois Rhomberg (they’re humorously protective of the little systems they’ve arranged for filtering water and taking meals), we’re treated to fantastic moments like Wicks’s terrified tears at Ewald’s arrival, a bit of roughhousing between Cole and Ewald that starts as a comic bit before turning unexpectedly tender, and plaintive serenades by ukulele-playing fish Kait Sergenian. 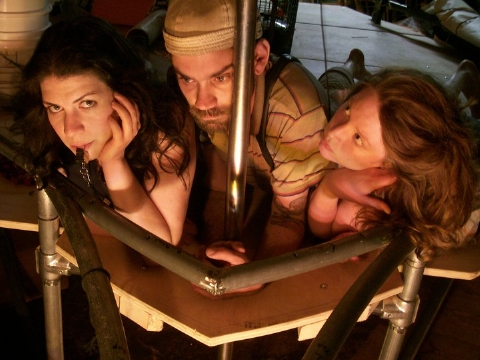 All the characters have telling moments of emotion, but the boatbound quartet are in such an intense situation that everything happens at a fever pitch; it’s compelling, but doesn’t leave much room for audience-performer empathy. The actors get a little breathing room during a couple of dialogue-free stretches where the characters interact silently to the accompaniment of songs performed by Luc Parker and Kat Wodtke, but though the songs are charming, they don’t fit here—they have too much presence, with conspicuously clever lyrics and dynamic arrangements that sound great but draw the audience’s attention out of the boat and away from the characters. More effective are the fish’s poignant performances of “Sea of Love” and “Umbrella” (the Rihanna song), both of which are so firmly planted in the cultural consciousness and are played so unassumingly (the fish’s backs are to the audience) that they work to underline and emphasize the characters’ actions rather than distract from them.

Some audience members will be disappointed that the relationships among the characters don’t build to a climactic confrontation. Based on Fanciness and Liquid Ladies, though—as well as The Thing, created by Johns with George McConnell—I get the impression that the Cat Fish are less interested in plot logic than in dramatic, thematic, and emotional logic. It’s not what the characters are doing or even what they’re saying that matters (much of The Thing‘s dialogue was improvised on the spot, and that show had no conventional plot whatsoever)—it’s what they’re feeling. Fanciness builds to an emotional and dramatic climax that is only cursorily related to any conventional plot development, and to criticize it on that basis would be like criticizing Jackson Pollock for not painting any nice rolling landscapes.

At the heart of Fanciness, in fact, is a moment that occurs entirely outside the plot and might be construed by literal-minded viewers as a kind of hallucination. In a couple of scenes not involving the other characters, Wicks befriends Sergenian’s fish, who angles (so to speak) for Wicks’s attention with heartbreaking awkwardness, trying to get Wicks to simply ask her questions—any questions. Sergenian claims to have a kind of sixth sense that informs her of things not obvious to Wicks; for example, that everything’s going to be okay and that Wicks loves her. “You love me!” she reminds Wicks as she sinks back into the sea, and the note of uncertainty in her voice points to exactly what the stakes are in the battle of Fanciness vs. the Void.

The truest thing I can say about Fanciness vs. the Void is not that it’s “good” or “bad” but simply that it’s essential. If you care about theater because you just like to sit in a seat and watch things happen on stage, you probably joined the standing ovation for The 101 Dalmatians Musical. If you care about theater because you actually care about what happens on stage, and why it happens, then Fanciness vs. the Void—whatever you think about it—will feel like a hit of pure oxygen.