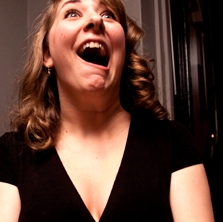 This morning I previewed Abstract Resistance, a big new show at the Walker Art Center. One of the reasons shows like that are so interesting to see and to write about is that they’re not just about the individual works of art—they’re also about the curatorial vision that brought them together. The Walker curates its performing arts schedule in a similar manner: how do the pieces work together and shed light on one another? It’s a promising direction to explore in the presentation of performing art, and it’s the direction the Southern Theater takes with Minneapolis New Breed, a three-company showcase “curated” by Jon Ferguson, the Southern’s theater programming director. New Breed comprises pieces by three local companies working at the leading, bleeding edge of what can be done on stage. SuperGroup and Mad King Thomas are first up; after an intermision comes the evening’s finale, presented by Lamb Lays With Lion.

SuperGroup’s piece has an unwieldy, self-referential title—Shouldwetitleitnoworwait—that is all too apt. An intriguing prelude to the piece unfolds before the show officially begins, as the company’s four dancers stretch and vocalize behind a towering white scrim, their backlit shadows shrinking and dramatically growing in size as they move about. I was immediately reminded of the fragmented, high-contrast musical compositions of George Crumb, and when the performers emerged from behind the scrim it quickly became apparent that the visual aspect of the piece closely paralleled its musical aspect—which had been tellingly previewed in the warm-up.

Accompanied by Jeff Temple on marimba and River Cook on percussion, the dancers—Erin Search-Wells, Sam Johnson, Byrd Shuler, and Jeffrey Wells—move about the stage in irregular, often contrapuntal fashion, venturing a step here, a turn there, a point here, a bend there. They don’t often look directly at one another, but they speak to and about one another in kaleidoscopic interpretations of multi-character texts, changing roles and voices often. The piece varies somewhat in texture, but doesn’t gain momentum, and becomes kind of tedious once you’ve got the point. (I was unsurprised to learn, when I read the program notes after the show, that the performers acknowledge the piece lacks “a unifying theme…there are many themes, many meanings, many forms, all together. Like life.”) The most effective portions of the performance are those where the company members air their fine singing voices in harmony—I’d pass on seeing a sequel to Shouldwetitleitnoworwait, but I’d love to see SuperGroup write an opera. Of course, Shouldwetitleitnoworwait might just be an opera. In that case, never mind.

Mad King Thomas’s Like a Circus, Only Death is so immediately entertaining that it almost feels like the three-woman troupe are cheating—the vanguard of theatrical performance is not supposed to consist of lip-synching to Ke$ha and Queen, with interpretive dance. Except that it does, and not a single person in the audience raised an objection; they were all too busy laughing and cheering. Like a Circus, Only Death is…well, it’s like a circus, only death. It begins and ends with death, and in the middle there are a series of circus-themed vignettes that are physical, funny, and engaging.

The three Mad Kings—Tara King, Theresa Madaus, and Monica Thomas—act completely convinced that you’re going to watch every minute and that you’re going to like it, and what can I say? They’re persuasive. The unifying theme of Like a Circus is not dramatically more unifying than the nontheme of Shouldwetitleitnoworwait, but when performed immediately after that piece, Like a Circus implicitly poses the question: if life takes many forms, and we have those many forms to choose from among when assembling a piece for the stage, why should we not choose forms that incorporate hula-hooping and dry-humping?

Before reviewing the Lamb Lays With Lion piece, I should offer my customary disclaimer that I’m friends with multiple people involved with the company (and with this production specifically, including actress Sheila Regan, a frequent contributor to the Daily Planet). That didn’t stop me from writing a lukewarm review of the company’s last show, but I don’t like to write negative things about my friends’ shows—or about any shows, for that matter—and I really wanted to like Lamb Lays With Lion vs. Katie Mitchell’s The Seagull. At first, I thought I really did like it. Then, I thought I didn’t. Then, I did like it again—and finally, I realized that one of the things I like most about it is that what I thought changed so many times over the course of the show’s hourlong running time. When you often write about theater, it’s really refreshing when a piece is half-over and you still have no idea what you’re going to say about it.

Here’s the premise: director Jeremey Catterton stages two simultaneous productions of Chekhov’s The Seagull. One is a straightforward production in the style of director Katie Mitchell’s lauded London production, and one is produced in classic Lamb Lays With Lion fashion: handheld lights, goth-glam costuming, ambiguities of gender and character, a dark electronic soundtrack, live video of the production displayed on a TV. In short, an experimental production. (The show might alternately have been titled Park Square vs. Bedlam.) Catterton introduces the premise, then cracks a beer and takes a director’s chair onstage.

The reason I liked the piece immediately is the sheer fun of watching the two interpretations unfold simultaneously. The contrast begins before the intermission even ends, as Catterton pours vodka for the LLwL cast while the Katie Mitchell cast sip tea, nibble biscuits, and shoot dark glances across the stage at their competitors. You wonder why it took so long for someone to figure out that experimental theater would be much more enjoyable if you put a straight-man production right out there on stage. At one point, Catterton even sneaks over to the Katie Mitchell side and physically enforces the fourth wall, preventing an actress from backing into the audience.

What started to disappoint me as the production proceeded was that there wasn’t more direct interaction between the two productions: I was waiting for one of the LLwL cast members to shine a light over to the Katie Mitchell side, or go steal a biscuit. There are a couple of moments where the casts are forced to acknowledge one another’s existence, but I felt like the missed opportunities were piling up.

In the end, though, something even more impressive happens: as the LLwL production (intentionally) falls apart while the Katie Mitchell cast (mostly) soldier on, you see in front of your eyes the elements of theater separate like oil and water. The Katie Mitchell cast carry the narrative of the abbreviated play, while the LLwL cast become pure emotion, eventually abandoning language entirely and acting only with their bodies. Instead of the cheap comic payoff I’d been hoping for, I got something richer: an illustration of the complementarity of traditional narrative and boundary-breaking theatricality.

But I’ve already mentioned my conflict of interest, so you should go and see it for yourself—not so you can decide whether or not I’m full of crap (I’m sure you have better things to do with your Friday night than dusting my reviews for fingerprints of bias), but simply so you can see it. As SuperGroup write in their program notes, “Maybe your interpretation will be different than your neighbors. And they will both be right. And wrong. Like art.”

Postscript: Actually, I am right.