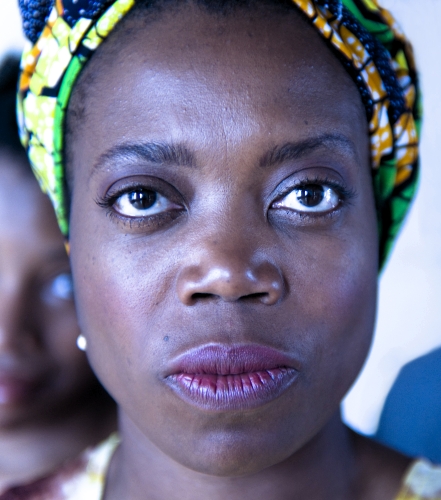 Nearly 200,000 women and girls have been raped in Eastern Congo since 1998, a result of a civil war that has incurred a death toll of more than 5 million people, according to a report from CNN. While the war ended 5 years ago, the rapes still occur as a weapon of warfare, the report states. This horrific tragedy is the backdrop for Lynn Nottage’s play Ruined, now playing at Mixed Blood Theatre.

The play, which premiered at the Goodman in Chicago last November and went on to a successful run off-Broadway, received a Pulitzer Prize, an Obie Award, a Lucille Lortel Award, and a Drama Desk Award this year. For the play’s Twin Cities premiere, Mixed Blood has rounded up a superb cast of actors led by the fiercely powerful Regina Marie Williams as Mama Nadi.

Nottage based Ruined on Bertolt Brecht’s Mother Courage, a play about an unscrupulous mother of three who seeks to profit from the Thirty Years War. Like Mother Courage, Mama Nadi appears in the beginning of the play and displays little regard for morality, instead seeking to make money when she can from soldiers, switching allegiances between the rebels and the state military when it serves her purpose. She runs a shop and brothel, and at the beginning of the play she purchases two “girls” for the price of one to be part of her business. Mama Nadi is reluctant to take Sofie (played by Celeste Jones in a luminous performance), who is “ruined” and unable to serve as a prostitute because she is mutilated. Mama Nadi is convinced by Sofie’s uncle and traveling merchant, Christian (Bruce Young) to take Sofie not out of sympathy but because she is bribed with hard-to-come-by chocolate bars.

While the character of Mama Nadi is very much like Mother Courage, and various plot threads in Ruined follow Brecht’s play, Nattage’s script is almost opposite in tone to Brecht’s work. Brecht advocated for an “epic theater” where the “spectator stands outside” the action—as opposed to “dramatic theater,” in which the spectator “is in the thick of it,” sharing the experience. Essentially, Brecht wanted theater to inspire reason, as opposed to feeling. By Brecht’s definition, Nottage’s play is “dramatic theater.” As audience members, we do not stand as a distance as the play progresses. Rather, we are drawn in to the harrowing, horrible story of these women.

Aditi Kapil’s direction, too, leans toward emphasizing the dramatic tension of the story as opposed to alienating the audience, as Brecht would have suggested. Kapil has drawn realistic and emotionally wrenching performances by the actors. As Salima recounts her gruesome experience being captured by soldiers, for example, actress Aimee Bryant delivers her lines with a raw, utterly realistic, and painful delivery: there is no way that the audience can reflect intellectually to her performance, as we are carried with her on her story.

The performance did have a few Brechtian moments, such as when the prostitute Josephine (Ericka Ratcliff) begins dancing, showing off for the men at the bar. Her style of movement changes as the drumming in the music increases and she begins to dance in a West African traditional style, waving her arms and stomping her feet. Then she begins to punch the air, caught up in a frenzy of fury. It is a completely unrealistic moment, but we understand the anger and desperation behind it.

Paul Epton’s lighting design, too, provides some elements of Epic Theater by deliberately jarring the audience. The final moment of the play, for example, features a striking spotlight on Mama Nadi’s face as she dances with Christian. The extreme lighting effect takes the audience out of the “moment” and reminds us that we are watching a play. With that distance, we are able to have a moment of reflection on Mama Nadi’s complex character and journey as the play closes.

With those exceptions, however, the play as a whole has the effect of engaging the audience emotionally, as opposed to intellectually. It’s a play that takes a lot of energy to watch, as the events it depicts are so gruesome. In a PBS interview, Nottage said that she hoped to bring attention to the story of the women suffering in the Congo. “I wanted to tell the story of these women and the war in the Congo and I couldn’t find anything about them in the newspapers or in the library,” Nottage told the Huffington Post, “so I felt I had to get on a plane and go to Africa and find the story myself.”

Perhaps Nottage’s emotionally charged version of Brecht’s Mother Courage will do a better job of promoting political change than a more “Brechtian” adaptation would have done. Hopefully after seeing the brutal acts shown and spoken about in Ruined, audiences will seek to find out more about what is going on in Congo; the highly publicized six-week run at Mixed Blood will raise awareness at leastin the Midwest. Hopefully the more awareness that is raised about this issue, the more we can create international pressure condemning sexual warfare.