When an usher asked the woman sitting in front of me Sunday night at the Guthrie to autograph a ticket for him (she graciously agreed), I realized that the woman was Louise Erdrich, author of the novel that served as the basis for the evening’s world premiere production of The Master Butchers Singing Club. I couldn’t help watching for Erdrich’s reactions throughout the play, and I can report that she seemed very well-pleased, clapping and laughing out loud. And indeed she should have been pleased: on the Wurtele Thrust Stage, her book becomes a ripping yarn that’s consistently entertaining, often moving, and staged with enormous heart.

I haven’t read the novel, but the stage adaptation by Marsha Norman spills the story across a gratifyingly bare stage, its many episodes tumbling out in a happy riot of lives and loves. Set in North Dakota (hence the plain stage) between the 20th century’s two world wars, the play tells the story of Delphine Watzka (Emily Gunyou Halaas), daughter of a small town’s token drunk (Terry Hempleman) and pretend wife of a generous-spirited acrobat (Charlie Brady) who sincerely loves her but also hides a lust that dare not speak its name. She grows close to a family of German immigrants led by a butcher (Lee Mark Nelson) whom she’d like to allow to slice her loins but who’s married (actually married) to an angelic beauty (Katie Guentzel) who also happens to be a superb cook and a real mensch. What’s a girl to do?

That’s just the barest introduction to an intricate plot that also involves an egoistic sheriff (Bill McCallum) who longs to have his toe (or perhaps a more dynamic appendage) tagged by the smoking hot local undertaker (Tracey Maloney); one young boy (Nicholas Saxton) who raises chinchillas and goes inadvisably adventuring in muddy caves; another slightly less young boy (Ryan McCartan) whose collarbone-kissing love affair with a local lass (Maeve Moynihan, familiar as the eponymous heroine of the recent Children’s Theatre production of Cinderella) almost becomes a Spring Awakening, and an itinerant Lakota narrator (Sheila Tousey) who’s one of only two survivors of the massacre at Wounded Knee. I’m not even going to get into the significance of the butcher’s jealous sister (Jennifer Blagen), because I don’t want to bore you. [Cue offstage voice: “Too late!”]

Even for a two-and-a-half-hour production, this scenario is perilously overstuffed with character and incident—but somehow, director Francesca Zambello (who also helmed the Guthrie’s world premiere of Little House on the Prairie) manages to make that part of the show’s considerable appeal. The play bounces along with one episode leapfrogging over the next, and all the many actors make such fantastic impressions that we’re always happy to see them. It’s probably the closest thing to a soap opera you’re going to see at the Guthrie, and it’s a hell of a lot of fun.

In my experience, it’s never a bad idea to cast Halaas as anyone in anything, and she easily carries her leading role with a performance that combines invincibly lovable confidence with deadpan, empathetic earthiness. Nelson could do with a little more erotic heat (Ricardo Antonio Chavira’s similar shortcoming was the one point of critical consensus regarding the preceding production on this stage; is there something about standing on 30 feet of thrusting stage that’s giving these guys performance anxiety?), but otherwise excels as the stolidly sympathetic singing butcher. Presented with an impeccable supporting cast, the Sunday night audience seemed to be most in love with the very funny Maloney and McCallum.

Though set designer David Korins indeed leaves the stage largely bare, with props being rolled out upon its deliberately dusty planks, a vast rectangle of sky visible through a wooden frame sets the scene nicely (in the second act, it turns out that the sky has a few tricks up its sleeve), and a train track running across the back of the stage carries a car that rolls back and forth carrying various set elements. (My guest Sunday night was my parents’ neighbor Betsy, whose daughter programmed the train movement as a production intern. Betsy was chagrined to see that her daughter didn’t make the program, so I will accord her that well-deserved credit here: the train movement was brought to you by Amy Schneider.) 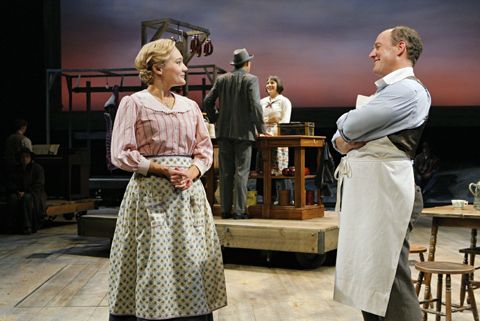 The relative sparseness of the set is consistent with the decision by writer Norman and director Zambello to make this production explicitly an act of storytelling. Tousey and Halaas narrate the action to the audience in a manner that’s handled so fluidly, you might find yourself forgetting that you’re hearing the narration on a stage rather than reading Erdrich’s prose on the page. The production is a musical, but instead of original songs (thank God, I thought to myself), we’re treated to Kevin Stites’s arrangements of classic songs authentic to the setting.

The best thing about this production is its irresistible warmth, a sense of enthusiasm that’s so boundless it wraps even the moments of sadness and violence in a feeling of safety and trust, kind of like a theatrical Snuggie. A starker, more emotionally challenging telling of the story would feel more appropriate in some ways—a grisly murder inspires some jolly laughs, and the production doesn’t work up much steam to the moments when it tries to convey the horror of Wounded Knee—but a colder telling probably wouldn’t work as well overall. The script constitutes a virtual encyclopedia of melodrama, and if it weren’t all so much fun to watch, it might feel strained. As it is, you care about what happens to the characters simply because the production so sincerely and good-naturedly invites you to fall in love with them.

I knew that the story, like much of Erdrich’s work, would involve an invocation and exploration of Native culture, but I didn’t realize that characters sharing my own ethnicity would also be central to the plot. Seven-eighths of my forebears made their way to America from Germany or Austria—the other two great-great-grandparents were an Irishman and a Norwegian—and in these days of head-in-the-sand English-only sentiment, The Master Butchers Singing Club is exquisitely timely as a reminder that all of us other than Native Americans are descended from immigrants to these shores, and that the least we can do is to show newcomers the understanding and tolerance for which our ancestors asked when they arrived. (Though it’s not dramatized in this production, for obvious reasons the early 20th century was a dicey time to be a German-American. At one point, a harassing sign was erected in southern Minnesota pointing to New Ulm and reading “Berlin.”)

For one more week, The Master Butchers Singing Club will share the Guthrie with The Scottsboro Boys, a play that asks hard questions about historical dramas. Does a play like The Master Butchers Singing Club serve a noble purpose in dramatizing past atrocities such as Wounded Knee, or does it just pay them lip service by way of entertaining a paying audience and making us feel good about ourselves? It’s in a sense an unanswerable question, but both shows are entertaining, educational, and provocative. At least for this week, fans of either or both can meet in the middle and raise a glass to the big blue beast that’s responsible for bringing us these two very fine productions.