I don’t know how I missed making specific plans to go see Bedlam Theatre’s Million Dollar Museum. It’s a paean to roadside attractions, which I love beyond all reason; the best thing about the show is that it feels like a roadside attraction itself, an eccentric piece of outsider art created by people with very deep, very strange convictions.

As it happened, I only made it to the show on a night when I had existing plans to go to Mars (more on that later), so I very reluctantly had to leave at the beginning of the second act. Fortunately, the first act alone would have been worth the price of admission. Bedlam has been transformed into a quirky museum (it didn’t actually require too much transformation), through which the audience is guided by Vespuccia Abbondanza (Katie Kaufmann) and her weirdly childlike thirtysomething offspring Clementine (Kimberly Richardson) and Washington (Jon Cole). I’m normally not a fan of adults acting like children, but Richardson and Cole make a riveting pair. Cole speaks in high-volume declarations similar to those he employed as Salvador Dalí in Dalí-DADA, and Richardson gives one of the broadest performances I’ve ever seen. I don’t mean broad as in wide-ranging, I mean broad as in broad humor; every single gesture is exaggerated, and her mouth takes on three or four significantly different shapes over the course of each sentence it delivers.

It becomes clear, as we are led into the bowels of the museum (happily replete with questionably referenced life-size historical dioramas), that our hosts’ arrested development is a result of the fact that they’ve never actually left the museum; their crazed mother has them under the impression that the outside world is full of lightning strikes, spoiled milk, and other mortal dangers. An actual visitor eventually arrives (the conceit is that the audience is invisible, that we were watching a practice tour) in the person of Texacon Stark (Johann Hauser-Ulrich), a trigger-happy cowboy who brings his own tumbleweed. Vespuccia traps Stark in the museum, as she has her children, a talking tuba (Carly Wicks), and a sloman (a half-sloth, half man played by George McConnell); Stark and Clementine mount a plan to escape. As I left, they were making their way through a dark basement where human waste (I know: yuck) was falling on discarded mannequins—one of whom came to life, looking like Boy George (the defeated Boy George of the 2000s rather than the coy youth of the 1980s, with makeup but sans wig) and sounding like Eeyore.

Ward tells me that the play, a world premiere by Josef Evans, may be rewritten and re-mounted in months to come; I hope so, and not just because I want to see how it ends. (I, like you, should go see it next weekend before it closes.) “There are a lot of directions it could go,” says Ward. Here’s my advice: whatever you do, keep the weirdness. Evans’s dialogue is very clever, a quality that grates in the antiseptic Coen Brothers films I’ve been watching but that works in Million Dollar Museum because the oddly high diction and random turns of phrase match the kind of rhetoric you encounter in actual roadside museums, where the proprietors nervously try to convey the impression that their modest collections of curiosities have profound historical significance. Another coup was to enlist Beatrix Jar for the sound design; the duo are specialists in coaxing strange sounds out of electronic toys, which is precisely the right aesthetic for this lovably odd production. 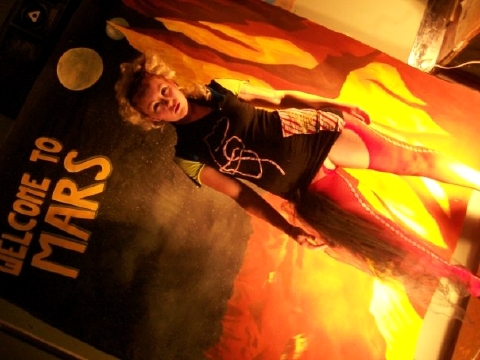 Believe it or not, my Friday night theatrical experience became even stranger when I arrived at the site of The Mars Project (the title of which is also sometimes written, more spaciously, as m a r s p r o j e c t), a presentation that’s part theater, part art, all party. There’s no program, but the actors-slash-artists include Samantha Johns, Savannah Reich, Carl Atiya Swanson, and other adventurously-inclined creators of happenings. The idea, Johns explained to me, was to create a piece of theater that would also be a party; audience members who might not come for the theater would come for the party. There was little question that many of the people at the project site, the entirety of a multi-story building across from the Southern Theater, were there for the party: “Where’s the booze?” asked one man before the show even started. (“The booze,” explained Johns patiently, “is on Mars. We are still on Earth.”)

“It’s very sexy here on Mars,” said another man waiting for the tour to start, and it’s true, to a one the Mars Project Martians are much sexier than the sexy robots in Robots vs. Fake Robots—though the sexy Martians and the sexy robots were similarly dressed, like Blade Runner replicants outfitted at Ragstock. The Martians eventually led us through an odyssey that included an orientation video, a Martian dance cabaret, a poignant encounter with a Martian immigrant whose lover had first turned into a plant (bad) and then died (worse!), and a consummatory hand-clasping makeout scene. (Mars, we were informed, is so outrageously erotic that merely being in proximity to someone can be a telepathically overwhelming sensation, and most Martians don’t even touch one another. There were three women squirming together on a couch for reasons I didn’t entirely understand, but I’m pretty sure they were part of the show.)

The climactic party did not disappoint, especially when Bouncer Fighter showed up out of nowhere to play a quick live set. There were Martian appetizers, including one with an octopus tentacle (yes, an actual octopus tentacle) emerging from a toasted bread cube, and there were Martian cocktails. “What are these colorful drinks?” I asked the bartender, indicating a row of Dixie cups filled with various colors of something or other.

“These,” he replied, speaking slowly and loudly so I could understand his Martian dialect over the din of the music, “are Jell-O shots.” The future, dear readers, is now.

Correction: The Mars Project runs through September 26, not October 26 as this article originally stated.