It’s hard to make a good tea bag rocket. You have to carefully unfasten the staple, straighten the paper bag out into a tube and empty the tea, then twist one end into a peak while leaving the other end round and perfectly flat. If all goes well, when you set it upright and set the peak aflame, the heat from the fire as it burns slowly downward will cause the rocket to fly gently aloft for a short moment before being consumed by flame in midair. That’s the trick director Bain Boehlke and his cast pull off with the Jungle Theater’s Glass Menagerie: Tennessee Williams’s world is carefully shaped into form, then sent slowly and gently aloft.

The production starts off on the right foot before it even begins, with Boehlke’s economic but rich set. The Jungle is the most intensely focused mainstream theater space in town (I have to add the “mainstream” qualifier, because I’ve had an even more focused theatrical experience involving a naked man in a small private bathroom with an audience of eight), and both artistic director Boehlke and associate artistic director Joel Sass have a gift for creating a sense of depth and versimilitude on the Jungle’s small stage. Boehlke’s set places the living room and dining room of a small apartment between two stretches of alleyway, and it’s completely absorbing.

Then the play begins. It’s introduced by Tom (Joshua James Campbell), a young man who narrates the play as well as playing himself. He shares the onstage apartment with his sister Laura (Alayne Hopkins) and mother Amanda (Wendy Lehr). The paterfamilias ran off years ago, and now Amanda is concerned that the sweet but eccentric Laura will find herself forever unmarried. Eventually she talks Tom into bringing his coworker Jim (Michael Booth) home to meet Laura, perchance to fall in love.

Tom’s opening monologue explicitly establishes the contrast between the world inside the apartment and the world outside (he describes Jim as “the most realistic character in the play, being an emissary from a world of reality that we were somehow set apart from”), and the entire play is presented as Tom’s memory, so we’re well-cued to regard the characters onstage as archetypal shadows of actual people. As we learn more about the characters, we discover that managing the distinction between reality and fiction was always a challenge for them. Boehlke’s recent production of Who’s Afraid of Virginia Woolf? makes an interesting contrast to Menagerie; whereas Edward Albee soaks his characters in alcohol and sends them in active pursuit of an elusive truth, Williams’s characters in Menagerie shun alcohol (onstage, at least) and undergo the equally exhausting pursuit of a convincingly seamless fiction.

It’s appropriate, then, that for the most part the actors play it broad and showy, though never sloppy. Campbell is restless and beleagued, Hopkins tic-ridden and nervous. Lehr (who’s a couple of decades older than her character logically should be, but who cares?) hits every note. Authenticity isn’t one of them, but it’s not supposed to be—this character is flying high amidst her own delusions, and she’s not coming down.

The first act is entertaining, engaging, and does its job of establishing the characters, but didn’t lead me to expect the power of the second act, at the heart of which Booth is left alone to make a go at drawing Hopkins out of her fantasy world. Trying to break through, Booth employs a carefully friendly tone that’s frank but genuine; it’s the same tone often used by Frances McDormand in Fargo. It’s a tone that says, “I don’t understand what’s going on in your head, but for your own darn good, I’m going to do what I can to bring you down to earth.” The moment of connection between Jim and Laura feels movingly genuine, and is handled with such enormous empathy that later revelations don’t cut as cruelly as they might in a less humane production. Though Menagerie is a tragedy, this production also allows the characters crucial triumphs. 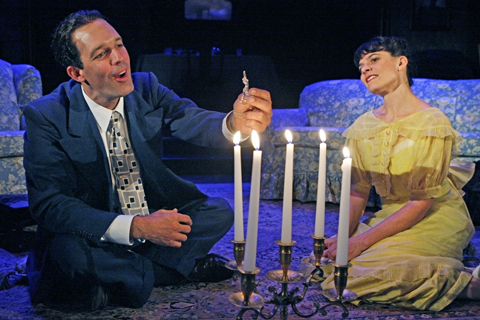 Music pervades the production, but thanks to Boehlke and sound designer Sean Healey—and to Williams, who originally wrote the script as a screenplay—it works much better here than in the Guthrie’s recent production of Williams’s A Streetcar Named Desire. Wafting quietly in from the dancehall across the alley, the music represents the alluring but ultimately smothering veil the characters—notably the forceful Amanda—try to pull over their lives. It becomes noticable at moments determined by the plot and characters rather than by the volume knob, and at the play’s very conclusion, Boehlke and Healey pull a nifty trick that’s so subtle, you might miss it.

Whereas the score for most of the play’s duration consists of sentimental string music authentic to the play’s 1930s setting, for the final scene, when Tom steps back into his narrator role and addresses his mother and sister from across decades’ remove, the music switches to a score by contemporary composer Philip Glass: rather than straightahead romanticism, this is postmodern neoromanticism, with Glass’s signature minimalist pulse providing a surging undertow. It’s a powerful and aptly implicit nod to the passage of time both in the script and since the script was written.