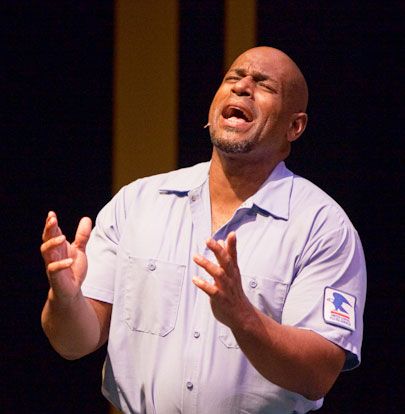 Honestly, nothing I say here matters. If you like this kind of music (and I do) and if you like these performers (and I do), then there’s absolutely no reason not to go and see Always & Forever at Illusion Theater. Always & Forever is four extremely fine singers (with some equally fine dance moves) singing a solid selection of R&B tunes from the 70s. The audience the night I saw it was clapping along, singing along, waving their arms in the air, calling out like they were in a particularly rowdy church on a good Sunday morning. The quibbles I have with it, and they are so few as to be almost non-existent, do not detract from an evening that is pure entertainment from start to finish.

The setting, designed by Dean Holzman, is the Shear Afro Barber Shop in the 1970s. Durius Wright (T. Mychael Rambo) is the proprietor of the place and is surrounded by his usual crop of regulars: married ladies’ man Leviticus “Levi” Tucker (Dennis Spears) decked out in full 70s pimp gear (topped off with shades and a feather in his hat band); postal worker Quenton Jones (Julius Collins III) pining for the wife who left him; and young shoeshine boy Jahmal Purdy (Jackson Hurst), just learning his way around the ladies. Not a lot of grooming happens until act two, but that’s not the point here. The barbershop is a place to hang out, and for these men, hanging out means singing songs. The men are backed by a lively combo behind the big barbershop mirror: Sanford L. Moore (also the music director/co-creator) and David Hurst on keyboards, James A. Young on bass, Kenayari Jamal Jackson-Steele on drums, and Kevin Anderson on guitar.

The hits are all here. Spears schools Hurst on how to woo women (and takes him out in the crowd to prove it) with “Let’s Get It On,” and Spears also brings on the naughty with “Use Me” and “Me & Mrs. Jones.” Collins brings down the house wailing “I’ll Love You More Than You’ll Ever Know.” And if anybody’s going to get any more mileage out of “When a Man Loves a Woman” or “You Send Me,” it’s going to be Rambo.

A running gag in a show where men sing about women, and to women, but there are no women in the production, is the female stand-in, the pay phone. Spears practically takes up residence by the phone, calling all the women in his life, none of whom are his wife. Early on, during “Can’t Get Enough of Your Love,” the man almost makes sweet love to that pay phone. In the second half of the evening, an elated Hurst sets the receiver down on a stool so he can continue singing “Signed, Sealed, Delivered” to his newfound girlfriend, while giving her a little dance number with the guys to go along with it. All the choreography, by Garry Q. Lewis, is buoyant and full of joy, echoing the moves from a bygone era and giving the songs that much more of a kick.

Always & Forever plays to its audience directly. There’s no fourth wall to speak of: the men on stage are constantly calling out to the audience and including them in the conversation. When they sing, the audience is right in the middle of it as well. All four men want to be sure the audience is having a good time and feel welcome. They don’t expect any passive observers or pretend there isn’t someone watching their every move. And that love goes both ways. Every growl, wail, riff, and extra long note elicited howls of appreciation to go along with the applause, and the standing ovation and singalong encore (“Joy & Pain”) were to be expected.

Once the characters are established by director Richard D. Thompson’s script in act one, act two doesn’t bother much with the pretense of a story. One song plows right into the next and because you know these men by this point, no further explanation is necessary. Not much for sentiment, Spears’s character will excuse himself to the restroom or head out on a chicken run during the ballads (“I’ll Be There”) or upbeat love songs without enough sex in them for his taste (“I Want You Back”). However, even the ladies’ man is not immune to some moments of introspection (“If You Don’t Know Me By Now” and “Tears of a Clown”), and from Spears, we buy the conceit.

The sound mix is problematic in patches. Most of the time these four men have such expressive voices that we can hear them loud and clear. But the band is just as often overpowering. When Rambo turns on the radio at the top of the show and another character calls out, “Turn that up,” I almost wanted to cry out, “No, for God’s sake, don’t turn it up, it’s too loud already!” Yes, it’s as much a concert as a musical revue, but you want to hear the singers as much, or more, than the band, and often you couldn’t, even though the cast had headset mics on the whole time.

Did they need to go back to the well a second time with reprises of each character’s greatest hit of the the night? No, those moments were already had and best left alone to be savored in memory. It merely telegraphed that the evening was drawing to a close. If act one proved anything, it was that we could hear new song after new song from this parade of hits and be perfectly content. The songbook is there to draw from and new material at the end might have been just as, or even more, effective.

But like I said, it doesn’t matter. Everyone had a hell of a good time. Any one of the singers returning for this remount (Collins, Rambo, and Spears) could get a crowd on its feet. Having all three in one place again is a real treat. The songs, too, are like old friends at this point, and hanging out for an evening with old friends is always welcome. So Always & Forever is very highly recommended.