I happened to be sitting near another reporter at the opening night of In the Heights at the Orpheum Theatre, and both of us admitted that we didn’t know very much about the show. The publicity images and the summary blurb—”Find out what it takes to make a living, what it costs to have a dream, and what it means to be home”—had led us each to think the show would be something like Rent. Actually, the closest touchstone is West Side Story: a musical tale of New York immigrant communities, complete with a star-crossed trans-ethnic romance.

These aren’t the 1950s, though, and In the Heights appropriately reflects that. To start with, the aforementioned lovers don’t just sing to each other; they enjoy what another character quite explicitly refers to as “a roll in the hay.” More significantly, though, the sharp (so to speak) distinctions between the Sharks and the Jets have disappeared. One In the Heights character struggles to find a word for her ethnicity: her grandparents came from four different countries.

Musically, composer Lin-Manuel Miranda is no Leonard Bernstein (who is?), but like Bernstein, Miranda incorporates a multicultural mix of musical styles into his score. Miranda does manage one thing that Bernstein could never have done: he has his characters rap. Not the cringe-inducing faux rap inserted into some productions for comic relief (typically involving awkward beat-boxing by a supporting character), but the kind of expressive lyrical flow you might actually hear on a record you might actually listen to. Hip-hop is a native tongue to young adults today, and In the Heights is the first mainstream musical to truly reflect that. Once you get over the initial shock of hearing a leading character in a major touring musical rapping without irony, it’s kind of exhilarating.

In the Heights feels snappy and fresh in a way that few major musicals do (or ever have); Miranda (who conceived the show, wrote its music and lyrics, and FTW originated the lead character in the show’s New York debut) and Quiara Alegría Hudes (who wrote the dialogue) are obviously at ease in their setting, and their comfort shows. Social issues from gentrification to ethnic succession are handled in a way that feels true to life. The brainy character doesn’t wait for a magical letter of admission to come from Stanford: she’s already received it, as well as a generous scholarship. The challenge she faces is fitting in and keeping up with her classmates’ lifestyle once she gets there. (Miranda, a 29-year-old of Puerto Rican descent who attended Wesleyan, likely knows of what he writes.) Much to the credit of Miranda and Hudes, none of this is handled in a heavy-handed manner: In the Heights feels like a celebration of an urban community rather than a report on The State of Our Cities. 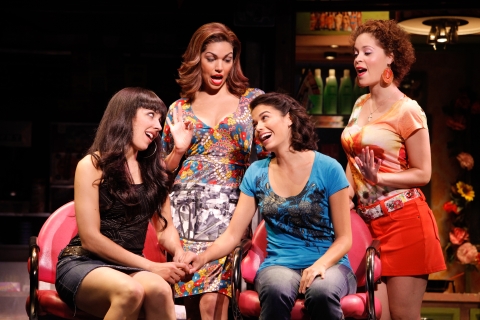 Though In the Heights tells its stories well, it tries to tell too many of them. The plot includes two major romances involving two different pairs of characters, four different families’ struggles to save four different businesses (a taxicab company, a convenience store, a beauty salon, and a piragua wagon—we hear separately from each of the proprietors), the relationships between two different ungrateful employers and two different loyal employees, a winning lottery ticket purchased by an unknown party, a graffiti artist’s quest for recognition, a woman’s longing for her native Cuba, a young man’s relationship with the elderly relative who raised him, a married couple’s power dynamic, and—how contemporary can you get?—the frustration one character experiences due to a poor credit rating. Many of these are dealt with relatively fleetly, but nonetheless there’s so much plot to get through that some of the songs become pure exposition. Even the piragua vendor (named in the program as “Piragua Guy”) gets two solo songs, in which he first wishes for and then celebrates the demise of the competing Mister Softee truck.

All that plot, and all those ballads, get a little tedious; but for the most part the show skips along. Indelible melodies are the elusive Holy Grail of Broadway productions, and in its lack of them In the Heights has ample company, but the musical numbers are unusually vigorous, and I often found myself tapping my toes. To a one, the cast members are appealing, from the four leads (Kyle Beltran, Yvette Gonzalez-Nacer, Arielle Jacobs, and Rogelio Douglas Jr.) to the sassy supporting characters, especially Isabel Santiago as the salon owner, David Baida as the piragua guy, and Shaun Taylor-Corbett as a young clerk with designs on something greater—free sodas, at least. If Broadway (or, rather, Hennepin) is the street of dreams, In the Heights is a welcome acknowledgment that those dreams don’t necessarily have to be fantasies.