In the Guthrie Theater’s new production of A Christmas Carol, Daniel Gerroll’s Ebenezer Scrooge prowls through London making sarcastic observations about the world around him, enjoying his own acid wit and declining all opportunities to actually engage with the people who fill the city’s bustling streets. This show didn’t inspire me to reflect on the meaning of Christmas, but it did cause me to rethink the amount of time I spend on Twitter.

The Guthrie has entirely rebooted its holiday staple this year, commissioning a new script from British playwright Crispin Whittell and deploying artistic director Joe Dowling to personally take the helm. It was definitely time for a change—though the abbreviated version presented last year helped tighten things up, Barbara Field’s take on the Dickens novel was feeling shopworn.

The first several minutes of the current production crackle with promise: the show begins with Tiny Tim singing a haunting carol, alone in a spotlight. The cast then crowd the stage with vignettes from the busy 19th-century metropolis, and Gerroll saunters on stage with a threatening scowl, a younger and physically livelier Scrooge than most. He evicts a family from one of his properties with a tone of brutal condescension, and it seems that this is going to be a bracing, dark adaptation. Then Scrooge arrives at his office and commences sitcom-style banter with Bob Cratchit (Kris L. Nelson), and it’s pretty much downhill from there.

This production has a few very striking moments. The end of the engagement between young Scrooge (James Leighton) and Belle (Christine Weber) is handled with gravity and poignance, and the arrival of the Ghost of Christmas Future is absolutely sensational. The giant flying phantom of death is a magnificent creation by set designer Walt Spangler and costume designer Mathew J. LeFebvre, and Spangler’s work throughout is the best thing about this production. Scrooge’s home and office (in this adaptation, he lives above the shop) is a cutaway house a la Gordon Matta-Clark, the slanted bedroom ceiling featuing a giant multi-paned window that will put you in mind of Johnny Depp’s lair in Tim Burton’s Sweeney Todd.

The fatal flaw of this production—a flaw that begins with the script but is exacerbated by Dowling’s direction and Gerroll’s performance—is a confusion of tone that constantly muddies the story’s emotional waters. Every few minutes, Gerroll is given, and enthusiastically takes, the opportunity to make fun of something. This gets some laughs, yes, but those laughs come at the price of character development. Given that A Christmas Carol is one of literature’s most iconic character-development pieces, that’s a very high price to pay.

Take the scene where Scrooge and the Ghost of Christmas Present (Nic Few) visit the Cratchits’ Christmas dinner. There’s much discussion of food, and Scrooge is given multiple laugh lines in which he points out how boring the conversation is. This Scrooge actively dislikes Bob Cratchit and his happy family, and Gerroll groans and rolls his eyes contemptuously when they walk in the door. Then, just a few minutes later when we learn that Tiny Tim is ill, Gerroll has to turn around and make us believe that he’s deeply concerned about the boy. The transition is incredibly awkward, and it’s symptomatic of a production that sells its soul for cheap laughs, but still expects the audience to care.

That confusion of tone plaugues the entire production, but many other aspects of the show are also oddly handled and ineffective. Jacob Marley (Lee Mark Nelson) comes bumbling out of a safe, almost apologizing for inconveniencing his former partner with this opportunity to escape eternal torture. Needless to say, Scrooge makes fun of Marley and doesn’t seem the least bit afraid. (Gerroll’s made to do a little cowering behind a desk, but he only kind of halfway cowers. You get the impression that when this Scrooge comes to Jesus, he’ll be one of those people who goes down on the kneeler but still rests his butt on the seat.) Arriving later, Few’s Ghost of Christmas Present is a deeply weird character who drops through the skylight with an loud boing and switches from testy threats to belly-laughs so rapidly that he seems almost deranged, like the Joker in a bathrobe. 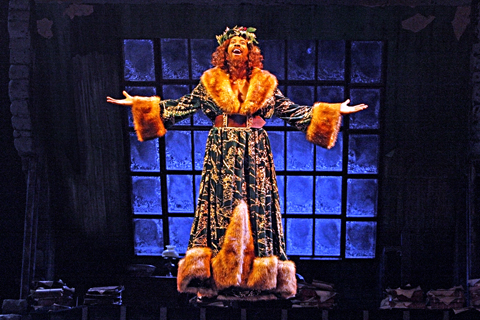 As the Ghost of Christmas Past, Kate Eifrig is given a particularly thankless task. She swoops in—or, more precisely, is haltingly pullied in—from above the crowd, harnessed to a rope. It’s a novel entrance, but the production doesn’t seem to know quite what it’s doing with the rope. Eifrig holds the thick rope and reclines in her harness in a manner that indicates her character knows she’s suspended from a rope, but the rope is unadorned and isn’t discussed or explained. Eifrig comes in for a bumpy landing on the stage, and then the lighting futily tries to direct our attention elsewhere while a supporting character runs up to take the rope and the unhitched Eifrig fastens the opening in her dress where the umbilical rope formerly penetrated. Eifrig deserves a special Ivey for somehow maintaining her dignity through this process.

Once the ghosts have done their worst, Dickens traditionalists had best fasten their safety belts, because Whittell goes completely rogue. First, Scrooge’s maid Merriweather (Angela Timberman) gets an unwelcome kiss under the mistletoe—Scrooge’s single-minded focus on money having caused him, he must now realize, to miss decades’ worth of opportunities for sexual harassment. Then, Scrooge invites his nephew Fred (Noah Putterman) and the entire extended family over to the Cratchits’, and then things get even loopier in a final twist that crowds the stage with the show’s entire cast. (Few returns with another boing, which at least one person sitting near me took to represent a fart.) Given this production’s enthusiasm for snarky laughs, I was bracing myself for the Ghost of Gary Coleman to fly in on Eifrig’s harness to declare, as he did on The Simpsons, “Whatchu talkin’ ’bout, every one!”

Any adaptation of anything has to take liberties, and I don’t take Dickens’s text to be sacred—after all, I loved A Christmas Carol: The Golden Girls Remix. The problem is not that Whittell and Dowling take liberties, it’s that they take the wrong ones. The essence of A Christmas Carol is the transformation in Scrooge’s character, and if that’s not rendered convincingly, the production will fail whether the adaptation is stolidly traditional or wildly avant-garde. This Scrooge is great when he’s being sarcastic, and completely unconvincing when he’s being sincere (sincerely wicked, sincerely joyful, sincerely anything), so the drama has no emotional weight. In the words of the Mighty Mighty Bosstones, it’s the holiday season and it’s freezing cold, but it sure doesn’t feel like Christmas time.