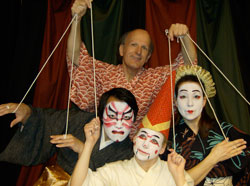 It’s like a story out of a movie, but it actually happened: in 2002, married couple Kathy Welch and Rick Coleman learned that a historic theater was for sale in New Richmond, Wisconsin. Welch and Coleman, who lived in Minneapolis at the time, took the plunge and moved to the small town, an hour’s drive northeast of the Twin Cities. They’re still there as proprietors of the Old Gem Theater, where they teach theater, host shows by various companies, and program their own shows under both the Old Gem name and under the aegis of Welch’s Green T Productions, specializing in shows influenced by Japanese theatrical traditions. Green T’s new production of Pinocchio-chan is currently wrapping up a run at the Old Gem and will be presented at Mixed Blood Theatre from May 6-16. On April 24 Sheila Regan, who’s performed with Green T, and I took a road trip to see the show at the Old Gem.

The theater is small, and the audience was smaller: a couple of dozen kids, many from a local group of Girl Scouts. The town of New Richmond turned out to be the very embodiment of quaintness. First Sheila and I stopped at the pint-size library, where patrons politely stepped aside so I could take a photo for our library blogger Ann Alquist. Next, we stopped for coffee at a bakery across the street from the theater, and the woman behind the counter yelled to the back room, “Mom! Do we have coffee on?” The Old Gem is equally cozy, and equally family-spirited: Coleman’s Copy Center is run by Rick out of the Old Gem’s lobby, currently advertising graduation announcements.

Welch knows her theater, and knows her history. She explained to me that she chose Pinocchio to adapt because the title character’s dilemma—he’s a puppet, but wants to be a real boy—reflects the longstanding tension between kabuki and bunraku. That said, Welch also knows her audience. Pinocchio-chan is a small-scale production, with the actors taking great pains to communicate the plot as it unfolds and introducing the Japanese elements with careful explanations.

The story is narrated by Geppetto-sensei, played by a very folksy Tom Monn as though he were hosting a kids’ show on PBS. When a block of wood refuses to be burned (occasioning wacky antics in which Monn is “pulled” about the stage by the bratty little log), Geppetto decides to carve it into a puppet: his wooden quasi-son Pinocchio. As the toy boy, Rita Tredal is tireless. Keeping her eyes wide and wondrous, she skips about and eventually falls in with a selfish pair of kabuki performers (Heather Brady and Ethan Xiong, doubling as the Blue Fairy and the talking cricket, respectively) who want to trot the living doll around for their own profits. Gepetto sets out to rescue the boy, and…well, you know the rest.

The children in the audience certainly seemed engaged and amused; when Monn asked for volunteers, multiple of them stretched their arms straight in the air and wiggled their hands desperately. (Whether Boy Scouts would have been quite so into it, I can’t say—but might hazard a guess.) At two acts, the show gets a little long, but it’s well-calibrated to its young target audience, and the performers—Monn and Tredal in particular—have the charisma to hold the kids’ attention. They’ll have their work cut out for them on the large Mixed Blood stage, where they won’t be quite so up-close-and-personal with the audience.

On the way out, I congratulated Welch on her success with the Old Gem. Thanking me, Graves said the theater was doing just fine, even though its shows don’t draw giant crowds. “Well,” I asked, “around here, what does?”

I’d meant the question to be rhetorical, but Welch had an answer: “Monster truck rallies.”