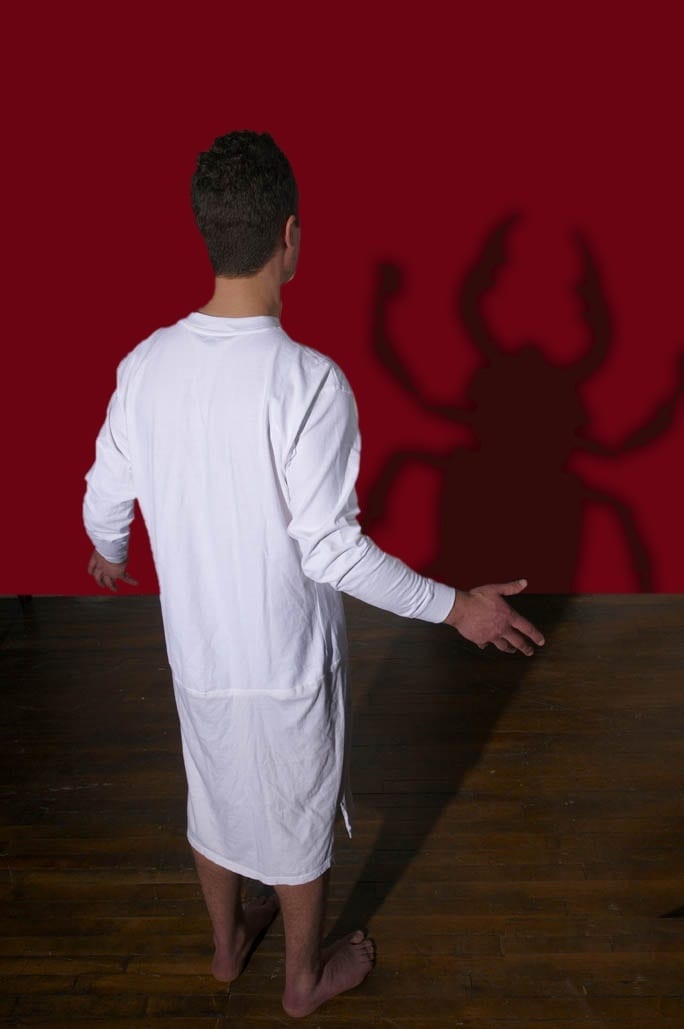 Last night I reviewed The Awakening, which I called “the perfect show for spring.” Though Frank Theatre’s Metamorphosis is also a very good show, it’s definitely not in the spirit of spring. It’s more of an October show, dark and chilly and gothic.

Like The Awakening, it’s a new adaptation of a classic work of prose—in this case, Franz Kafka’s 1915 novella. The real point of comparison, however, is Jon Ferguson’s 2008 production of Animal Farm. In both Animal Farm and Metamorphosis, John Catron makes a human-animal transformation; in the former, he was a pig who turned into a human, and in the latter, he’s a man who awakens one day as a giant bug.

Both Animal Farm and Metamorphosis mix dark humor with nightmarish visions, but in Animal Farm the nighmares were lost amidst the laughs. At first I was afraid the Frank troupe would founder on the same rocks—the packed opening-night house on Friday night guffawed at some early antics—but then the horror began to escalate, and it became clear that while the show would continue to be funny, it wouldn’t be funny ha-ha.

The Frank adaptation, credited to “the company” and directed by Wendy Knox, presents Kafka’s text in voiceover, with Maria Asp, Patrick Bailey, Tessa Flynn, and Christopher Kehoe serving alternately as narrators and characters. They portray Catron’s family and associates in broad caricature, often moving in slow motion so that there’s no danger of missing a single sneer, snarl, or wicked grin. The cartoonish approach works as drama both because the intensity is so unremitting—their disgust and impatience with Catron grows slowly but steadily—and Catron’s superbly sincere performance as Gregor, the tragic hero whose plight vividly dramatizes the gnawing self-doubts that plauged Kafka incessantly and the rest of us, if we’re lucky, only occasionally.

Open Eye is the perfect venue for this creepy tale, and John Bueche’s set effectively turns the little Open Eye proscenium into the door between a cramped kitchen and the little bedroom where Gregor is pitiably trapped. Kathy Kohl’s costume design is eye-popping, particularly the darkly dandyish outfit worn by Kehoe as the chief clerk and the transforming outfit that makes Kehoe first a “big-boned” char woman and then a trio of lascivious old men—incorporating grotesque puppets by Virginia Burke. Michael Croswell’s live music isn’t just background; it’s integral to the production, and it wraps the performers in a spine-tingling soundscape.