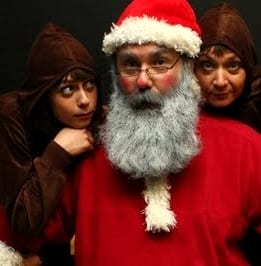 Foxy Tann’s Beaverdance at Bedlam Theatre. The very notion is enough to arch eyebrows and curve lips in a wry smile. Before the audience takes their seats, they’ve already put Foxy Tann‘s provocative proclivities together with Bedlam Theatre’s penchant for the wildly irreverent and have their mouths watering. Well, Beaverdance doesn’t quite fulfill such expectations. It doesn’t, however, fall short by a great deal. The production, despite missing a mark or two, is a hit. One generous helping of uproarious hilarity, Foxy Tann’s Beaverdance solidly entertains. Deft satirist Corrie Zoll provides the book with good lyrics by Dan Pinkerton and lively music by Marya Hart. Foxy Tann’s directing is capable.

Here’s the premise. Testosterone-dependent fur trader Jacques Brainerd lands in Central Minnesota in the early 1800s and finds himself in love with Native American goddess Ojibwe, who just happens to be particularly devoted to a certain buck-toothed, flat-tail, dam-building critter. You take it from there.

Music director and pianist Ian Boswell does a fine job. Zoll is a talented writer. However, he doesn’t bring the story home. Beaverdance lacks an arc. Foxy Tann earns her paycheck as the director, but doesn’t do anything much worth writing home about. She sustains a crisp pace and handles a large cast well—not easy to do—but punches up too many sight gags and, aside from timing Leffler-McCabe’s sure-handed deadpan, doesn’t go much for subtlety. Halfway through the second act, the show segues into a revue, then comes to an engaging close.

The positives outweigh the negatives. Added to which, this is dinner theater. Let it not be said Bedlam Theatre doesn’t know how to throw down a feed. Good grub and an excellent wait staff, headed by one adroitly hands-on house manager who goes by Telsche (sounds like Tulsha). You can get the whole package or opt for just the stage show. Either way, you win.