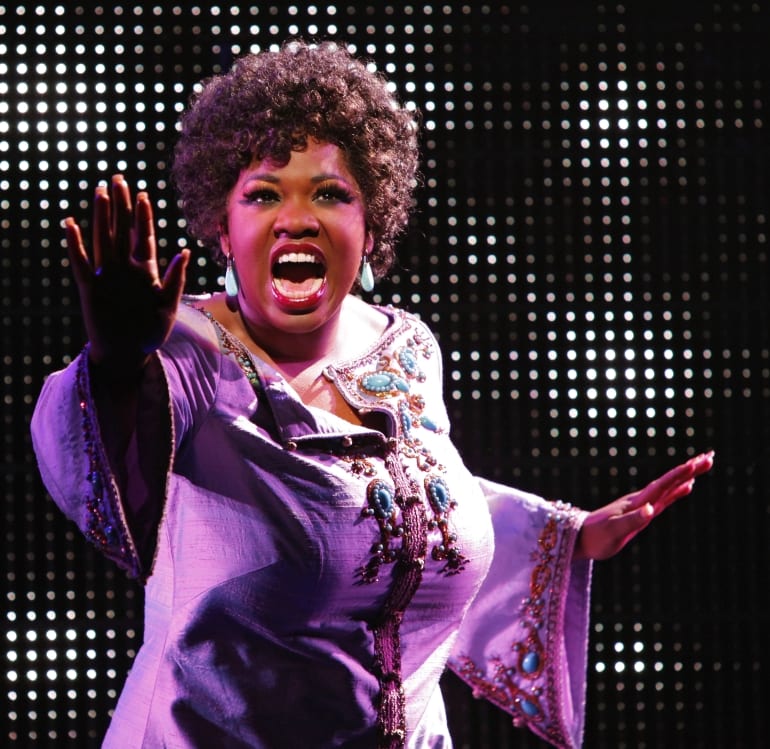 “When they get people in Minnesota standing up and shouting out,” observed my sister at the intermission of Dreamgirls, “you know they brought it.” It’s true that I’ve never seen an audience quite so vocally engaged in a touring musical as the Tuesday night crowd at the Orpheum was. At one point, when the eponymous ladies were singing about men not being able to control them, from somewhere in the vicinity of row EE there came a throaty cry of “Yes!”

Dreamgirls is a musical about black performers in the 1960s and 70s, an era when it was a point of pride for James Brown to be “the hardest-working man in show business.” Whether or not the Godfather of Soul had legitimate claim to that title, it was an ideal to which his peers aspired. Performers crossed the country in touring revues, doing their damnedest to give audiences from Peoria to Portland a reason to buy their records. They also crossed boundaries of genre and race, moving from the R&B charts to the pop charts and, sometimes, back again. It was a crucial period of transition in music, and that transition is itself a major theme of Dreamgirls. It’s hard to believe that the world went from girl groups to disco in the same amount of time that’s brought us to 2010 from 1995.

If the musical glosses over the era’s racial, commercial, and aesthetic politics—white performers are demonized as “thieves,” even by a songwriter who at two points in the story is collecting royalties from multiple competing versions of his songs riding up the charts—it’s likely to be an eye-opening history lesson for young audience members who may not realize how much Prince and Jay-Z took from the likes of James Brown and Jackie Wilson, and who might recognize the dance moves and vocal stylings of groups like *NSync in the Temptations-like acts depicted onstage.

The heroines of Dreamgirls, though, are a trio of women modeled after the Supremes. Effie (Moya Angela), Deena (Syesha Mercado), and Lorrell (Adrienne Warren) are discovered at an Apollo Theater talent contest, and are enlisted by car-salesman-turned-impresario Curtis (Chaz Lamar Shepherd) to perform behind James “Thunder” Early (Chester Gregory), a soul stutterer who’s a slightly smoother version of James Brown (not omitting the golden cape). Eventually “the Dreams” break out as an independent act, and drama ensues when Effie—who is vocally gifted but has a heavy build and a heavier attitude—is slighted in favor of the camera-friendly Deena. While the Dreams top the charts with pop hits, Effie strikes off as a solo performer and ends up challenging her former groupmates’ ethics and aesthetics. (The Dreams go disco while Effie takes the pre-remix Roberta Flack route.)

Except for five massive, mobile animated panels that must have cost a bundle of won (the production was created in South Korea), the set is minimal—with all the egos crowding the stage, there isn’t room for much else. Dreamgirls is all about showboating, and director Robert Longbottom keeps his hand on the throttle. Onstage and off, the characters are constantly declaring their commitment, their indignation, their dedication, and the state of their libidos with full-throated fervor. Henry Krieger’s adequately catchy music is almost through-composed, so at no point in the show are you any more than a few minutes distant from some serious testifying. It makes for a wild ride, especially in the scenes near the end of the first act, when the divas are all having it out with each other. To get a sense of what this is like, imagine if The Real World were to be enacted entirely in the style of Aretha Franklin’s performance of “Think” in The Blues Brothers.

The surest showstoppers are Angela—who concludes the first act with a song of devotion that keeps building and building and building, as the singer contorts her body to squeeze every last drop of soul out of the song (then, early in Act II, she proceeds to change her mind about the object of her devotion)—and Gregory, a born showman playing a born showman. Unfortunately there are also moments (particularly in the second act) when the show is stopped by wan ballads rather than by powerhouse performances, but overall Dreamgirls is a welcome blast of searing charisma in the middle of a chilly winter.

Note: If you attend Dreamgirls and it leaves you wanting more, you can do better than just going to Blockbuster to rent the Oscar-winning 2006 film adaptation. We have our own Apollo Theater in North Minneapolis’s Capri, which regularly showcases the best local soul, gospel, jazz, and R&B performers.