“Robin Hood is not just the story of a skilled archer who takes from the rich and gives to the poor,” a woman sitting behind me read aloud from the program before the show began. “It is a story of resiliency, of making meaning out of adversity, of someone willing to stand up against illegitimate authority…do you know what ‘illegitimate authority’ is?”

The young boy sitting beside her didn’t know, and didn’t really seem to care. He was looking at the next page. “Ooh! A maze!”

The best thing, or the worst thing—depending on your tastes and your age—about writer/director Greg Banks’s rendition of the classic story on the Children’s Theatre’s Cargill Stage is that it follows that boy’s line of thought. The production opens provocatively, with cast members clad in rags asking children for money. The kids leapt to give it to them—real money, spilled from their parents’ pockets—and I wondered whether the production was going to prod the kids to consider the connection between the peasants Robin Hood was helping and the panhandlers who stand downtown holding cardboard signs. Then the beggars begin their story, and…ooh! A maze!

Maybe I’m just the wrong person to review productions at the Children’s Theatre, ever. I majored in early childhood education, and I get along great with preschoolers, but once they hit first or second grade, they start to lose me. 45 years into its existence, CTC is incredibly adept at spiking its shows with the MSG of grade-school entertainment: pratfalls, fart jokes, and guys getting hit in the crotch. Everything is big and brassy and the kids (Robin Hood is recommended for ages seven and up) love it. But except for the sweetly chaotic Bert & Ernie, Goodnight!, the CTC shows I’ve seen over the past few years have left me cold. I just keep asking myself a question that doesn’t bedevil the average grade-schooler: To what end?

This Robin Hood was produced by a crackerjack creative team, starting with Banks, creator of the CTC’s hugely acclaimed Romeo and Juliet (2009) among other strong productions. The four-person cast comprises the inimitable pair of Dean Holt (Robin Hood and others) and Reed Sigmund (Prince John and others), with Julian McFaul as the Sheriff of Nottingham and Anna Sundberg, my favorite local actress, as Maid Marian (and others). Scampering over Joseph Stanley’s attractive and fortunately sturdy set of standing and fallen wire-frame trees, they tumble through the classic tale with simple costumes and few props. Victor Zupanc provides live music and, occasionally, dramatic support.

The show is, quite literally, swift on its feet and often entertaining (especially if you’re a grade-schooler), but thematically it’s kind of a morass. In every respect the cards are stacked in favor of the outlaws, so there’s no moral quandry, it’s just the good guys versus the bad guys. McFaul’s sheriff is wicked without seeming to at all enjoy his wickedness (the bar here was set by Alan Rickman in Kevin Reynolds’s 1991 movie; as Anthony Lane put it, Rickman “stole from Kevin Costner and gave to the viewers”); and Sigmund’s Prince John, riding in a washbucket pram full of cash, is a caricature of dandyish royal privilege so grotesque that McFaul seems to have rolled him directly over from Open Eye Figure Theatre. 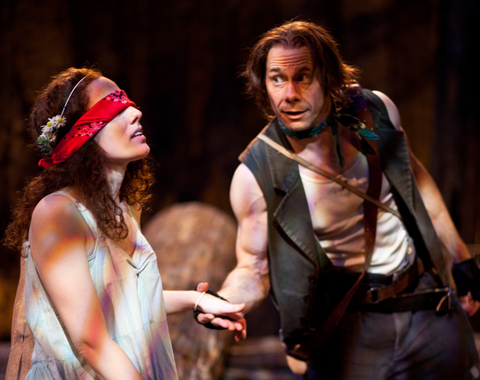 As Robin Hood, Holt cuts an extremely peculiar figure that starts with Mary Anna Culligan’s hobopunk costuming—in sneakers, loose-fitting pants, a vest, a neckerchief, and a floppy haircut with thin ponytail, Holt looks like he’s about to teach a yoga class at Burning Man. Veins pop from Holt’s muscular bare arms and he leaps lithely about the stage, but in his late 30s he looks significantly older than Sundberg, and their characters’ attraction seems based largely on the fact that they both know that any other lover either one might find would actually want to stand still from time to time.

The actors tackle the challenge of their multiple roles vigorously, which they need to, because they get even less help from the props and set than they might have expected in this deliberately simple production. When McFaul burns a small paper house to represent the torching of a poor peasant’s home, it’s a powerful moment that demonstrates what might have been done more often, even within this production’s tight economy of means. By the time Holt splits an arrow, though—an iconic moment in any Robin Hood—Zupanc just holds one arrow against another and we’re informed that the first arrow was split. Huzzah?

After ending on a triumphant note, the beaming lovers united in blink-and-you’ll-miss-it matrimony by Sigmund’s squealing Friar Tuck, Banks takes an unnecessary mulligan with a rushed coda that puts Robin Hood through a few very hurried adventures and ends on a more ambiguous note, with Robin’s fate unknown. It was hard to much care, though, since Robin Hood is never really made the hero of this show. Safe with Sigmund’s thick beard and Sundberg’s swift bow, you have to believe, the kids of Sherwood Forest are definitely going to be all right.