Kara Lindsay and Kevin Massey in Little House on the Prairie: The Musical.

“Even without looking,” my girlfriend said to me, “I can tell when you’re cracking up.” Indeed, there were many moments in Little House on the Prairie: The Musical that caused me to crack up; a few inadvertently, most advertently. But by the romantic reconciliation at the conclusion of the show, I was leaning back in my chair and hoping Anna couldn’t also tell when I was misting up.

The musical—now playing at the Ordway—presents the oft-told story of Laura Ingalls Wilder (Kara Lindsay) and her family, adapted from Wilder’s books, which were themselves adapted from Wilder’s actual experiences in the late 19th century Midwest. The first act concerns the Ingalls family’s arrival at their South Dakota homestead (Melissa Gilbert, who played Laura in the Little House TV series, is Ma; Steve Blanchard is Pa); the second tells of Laura’s departure from the family to financially support the education of her ailing older sister Mary (Alessa Neek; younger sister Carrie is played by Carly Rose Sonenclar). Along the way, she vies with snotty town girl Nelly (Kate Loprest) for the affections of Almanzo (Kevin Massey, looking like a sodbusting Patrick Dempsey).

I’m going to be honest: I pre-judged Little House by its fonts. The advertising for the show features Gilbert’s name in Brush Script, a font typically found on posters for church potluck suppers. It’s often used ironically, but in this case I feared that, in a commercial production mounted on the heels of the musical’s 2007 world premiere at the Guthrie (which featured much of the same cast, and which I did not see), the cheap and common font choice presaged a lack of attention to detail and design. The winking message delivered over the PA before the curtain rose (“turn off those new-fangled cellular telephones and settle into those bought’n seats”) further filled me with dread that I was about to witness a big cheesefest.

Nothing could have been further from the truth. In fact, this is one of the classiest musical productions I’ve ever seen. Nearly everything about it manages to satisfy and feel rich without being overdone.

Given that I’d just endured The 101 Dalmatians Musical a couple of days previously, Rachel Sheinkin’s Little House script was a breath of fresh air in its respect for the material, the performers, and the audience. Sheinkin gets plenty of laughs, but few of them are earned with disruptively flag-waving ha-ha lines like those that litter the Dalmatians script. The Little House script really isn’t very clever at all, and I mean that as a compliment: the audience laughs because the dialogue and situations are true to the characters and true to the setting, and because the performers are skillful and sympathetic. 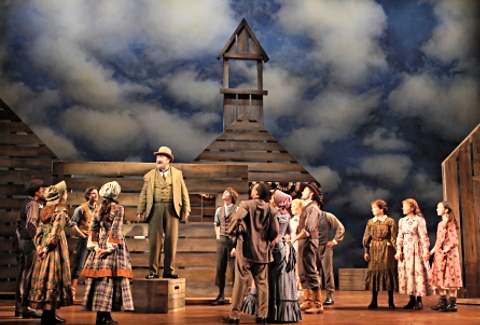 The sets are beautiful, and pleasingly minimal; I haven’t seen so few props on the stage of a musical since A Chorus Line. Using a couple of simple walls and boxes to serve multiple purposes, set and warmly lit in front of towering scrims gorgeously painted with the colors of the sky, gives the Little House stage an appropriately wide-open feel.

The music, by extremely classy composer Rachel Portman, gives further testament (not that any was needed) to the fact that Aaron Copland has officially defined the soundtrack of the American frontier. Portman’s score is baldly a pastiche of mid-career Copland, but at least it’s a very good one. What Portman doesn’t have is Copland’s ear for indelible melodies: among the many songs, only “I’ll Be Your Eyes,” the first-act closer, comes anywhere near sticking in the head. Still, Larry Hochman’s limpid orchestrations are as absorbing as the big-sky scrims; during many stretches of Little House, you feel like you’re watching a big screensaver.

The second act of Little House is much stronger than the first, a fact that has everything to do with the evolution of Laura’s character and its portrayal by Lindsay. In the first act, the 24-year-old Lindsay is compelled to act like a rambunctious girl ten years younger—which is a stretch, and it shows. In Bedlam Theatre’s recent Million Dollar Museum, Kimberly Richardson played a thirtysomething woman whose development is comically arrested somewhere around 11 or 12, and Lindsay’s first-act performance reminded me of Richardson’s just a little too much. In the second act, though, Laura grows up and Lindsay is allowed to act much more naturally. The scenes she shares with Massey and Loprest are the best in the play, with Lindsay convincingly bruised by Massey’s temporary infatuation with the fish-out-of-water Loprest.

By the time Lindsay and Massey are reconciled (I’m not giving away any surprises here; Almanzo’s last name is Wilder), they had me—and so did the entire show. Little House on the Prairie is the girl-next-door of musicals: there’s nothing really exceptional about it, but it’s sweet and pretty and respectful and pure. If I ever again find a big-budget traveling musical that’s aptly described by those four words, I’ll eat my Playbill.