27 years after the release of Bob Clark’s film based on the anecdotes of Jean Shepherd, A Christmas Story has reached a remarkably prominent position in the cultural firmament. Millions upon millions make an annual ritual of viewing the movie one or more times, and the Cleveland house used for exterior shots of the Parker family residence has been opened for public tours (after being modified inside to match the movie set). A Christmas Story has made the Depression era the default setting for depictions of children’s Christmases, just as John Hughes’s films have made the 1980s the default decade for depictions of senior prom.

The adaptation of A Christmas Story now being presented by the Children’s Theatre Company, written by Philip Grecian and directed by Peter Brosius, clearly manifests its creators’ knowledge that people are not attending this show in search of something new and pathbreaking: they want to see their favorite scenes come alive on stage, and that is indeed what they get. From the tongue-on-the-flagpole scene—the movie’s flagpole becomes a lamppost, which is about as heretical as this production gets—to Ralphie’s accidental obscenity to the iconic Leg Lamp, it’s almost all here. (Some will surely miss the Chinese restaurant staff singing “Fa-ra-ra-ra-ra,” but I was glad that Grecian and Brosius had the good taste to omit that moment from this adaptation.)

While accomplishing that task, Brosius and his cast give this well-worn material a shape and focus that keeps it down to earth and close to home. In my experience, kids are rarely as excited about watching the Christmas Story movie as adults are to show it to them. In part, that’s because the movie is so manifestly a nostalgia trip, and in part, that’s because the movie is actually pretty scary. Cruel bullies, nasty tricks, a father with a ferocious temper—even Santa Claus and his elves are angry and mocking. That may amuse adults, but it’s not what you want for Christmas when you’re a little kid.

This production softens those edges: for children, the CTC production of A Christmas Story is a better introduction to this material than the movie is. Santa is only heard offstage, and the bullying is played more for laughs than for terror. The romantic flirtation between Ralphie (Taylor Scott Leighton) and a classmate (Kimberly Hatlestad) is handled with sweetness and restraint. Most notably, the Old Man is a lot nicer. In the film, Darren McGavin bristles with tension and threat; on stage at CTC, Gerald Drake is affectionate and lovable, with endearing foibles. He raises his voice sometimes, but seems only momentarily frustrated rather than permanently seething. Drake’s casting is a stretch agewise—he’s decades older than his character—but he handles this material with great aplomb.

The action unfolds on an elegant and inventive set by Robert Mark Morgan: an entire house that rotates on a turntable, with a separately turning outer circle that allows the actors to run along the sidewalk without actually going anywhere. The narrator, Ralph as an adult, is only heard in voiceover in the film but here appears on stage in the person of Bradley Greenwald. I found it odd and a little distracting to have him running back and forth across the stage as an unseen ghost among the other characters, but Greenwald makes the character dynamic and appealing. The children cast as supporting characters play their roles to the broad (if anything, too broad) comic hilt, and Alec Fisher gives a notably fearless performance as perpetually-peeing little brother Randy. Leighton and Autumn Ness are steady at the center as young Ralphie and his mother. 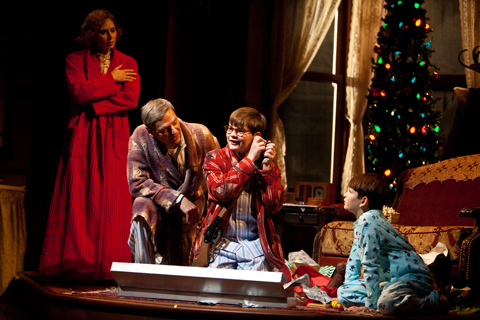 My last two reviews of Children’s Theatre shows—The 500 Hats of Bartholomew Cubbins and Robin Hood—were both negative, though in both cases I acknowledged that the children in attendance clearly enjoyed the productions. In my Robin Hood review, I wrote that “Maybe I’m just the wrong person to review productions at the Children’s Theatre, ever.” What was bothering me was that the onstage antics existed in a thematic vacuum: the theme of social justice in Robin Hood is in the program but not on the stage, and Cubbins has underlying themes that are actually kind of disturbing when you stop to think about them.

After those two reviews, I received an e-mail from Anne Schopen, CTC’s public relations manager: “I must say, you’ve caught Peter’s eye and he was wondering if you might be willing to come in and talk to him. As he does with most of the major arts reporters, he’d love to give you his perspective on the artistic direction of the theatre.” I accepted the invitation, and a couple of weeks ago I sat down with Peter Brosius—the company’s artistic director—and Elissa Adams, director of new play development.

We didn’t talk directly about my reviews, but I explained that having written a doctoral dissertation on the sociology of children’s culture, I tend to look skeptically at the discourse surrounding cultural products (plays included) aimed at kids—looking at the difference between what we say something does (like books are supposed to be good for kids, and TV is supposed to be bad) and what it actually does (TV is rarely as bad as we say it is, and books rarely as good). So when I walk into an establishment full of people who are absolutely convinced that theater is almost unconditionally good for kids, my BS detector goes into Super Pursuit Mode.

In response, Brosius and Adams said that they focus directly on their young audiences, rather than on adult expectations for their productions. They pointed out that CTC is unique in the country among professional children’s theater companies in that its shows are aimed at the public rather than at school groups, and that they try to craft their shows to provide multiple points of accessibility for children of different ages. Speaking specifically about A Christmas Story, Brosius explained that he’d been talking with the cast and production team about the parallels between the play’s Depression-era setting and our currently ailing economy, that the play could really speak to the universal struggles of families sticking together in tough times.

I wondered whether that background would come through on stage—and really, it doesn’t. Sure, Ralphie’s parents hate getting bills and always have to buy used cars, but so do most families, in all economic climates. Where this production succeeds—even more so, in this respect, than the movie it’s based on—is in portraying the universal struggles and triumphs of childhood and family life. It’s fun to be a kid, but it’s also agonizingly frustrating, and this production understands that well. Whether you grew up in Indiana in the 30s wanting a Red Ryder BB gun (like Jean Shepherd) or in Minnesota in the 80s wanting an Ewok Village playset (like me) or in Minnesota in the 10s wanting an iPad (like the kids in the audience), you’ll recogize your childhood here—and chances are, you’ll smile. I did, and that’s not BS.