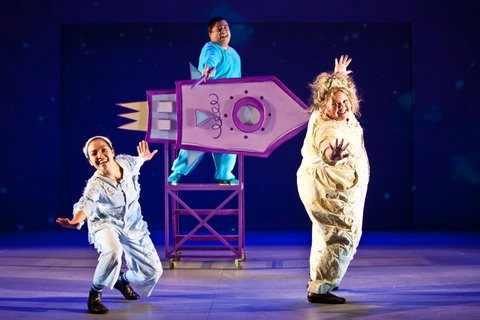 One of the most difficult things about raising children is to watch them confront the world’s harshness for the first time. My two little ones have thus far been privileged and blessed to allow this to happen slowly and gently—at the death of a dear friend’s elderly father, with conversations about homelessness or petro-chemicals or greed, and, yesterday, with a first trip to the Emergency Room. Without getting into too many details, my sweet four-year-old spent most of last Saturday under the florescent lights of Children’s Hospital, being poked and prodded while watching ungodly amounts of cartoon television and negotiating IV-for-ice-cream trades. We came away from the day with an unsettling, but temporary diagnosis, feeling 90 percent grateful and 10 percent, well, exposed.

The night before, oblivious to what the weekend would bring us, kiddo and I filed into the Children’s Theatre for opening night of Harold and the Purple Crayon. Having missed the flashy and (we were told) “pretty scary” Wizard of Oz production earlier this winter, we were excited to be back in the loop. My kid and I spent a lot of time wondering, in anticipation of the show, just how they would turn Harold’s stories into a theater production. The answer: musical theater. Harold and the Purple Crayon conjured memories of Free to be You and Me. The music is campy, the lyrics are heavy on pushing kids to feel good about themselves, and, well, there’s a disco number.

The house was not packed, as I’d expected, but the crowd was excited for the show. It began with the introduction of Harold, who twirls on stage and immediately discovers his precious purple crayon. From his very first giggle, Don Darryl Rivera was excellent as Harold. Though not the most glamorous role imaginable, “grown man as loveable three-year-old in footy pajama’s” is certainly a challenging one, and Rivera got it right. His two companion storytellers on stage, Khanh Doan and Caety Sagoian, were lovely as singing, dancing (though never speaking) puppeteers in rocket ship applique jumpsuits (also vaguely disco-esque). Their roles added much to the experience.

The scenes were held together loosely by a thread of a plot. Harold is drawing the moon. The moon is following him. He is hungry and draws a pie, then draws a porcupine and a moose to share it with. “Harold has adventures with his crayon and the moon, and then he goes home to bed.” In this way, and in many ways, the production didn’t deviate much from the classic books.

Technically, the show was tightly put together, which is to be expected from Children’s Theatre Company. The beauty of the production comes from it having a little bit of everything to offer: dance, song, puppetry, and special effects. The magic of the purple crayon is portrayed with light, sound effects, the actors’ precise timing and a hefty dose of computer animation projected on to the stage and its backdrops. The audience is asked–expected, really–to use their imaginations, which I think is important in a show for young children, and also increasingly rare as technology plays a bigger role in stage productions. This may not be a show for kids who are concerned with being “too cool.” It is silly and maybe a bit cheesy. Harold himself (the original, and also Rivera’s portrayal) is a little kid, with little kid enthusiasm. Still, the tweens behind me seemed to accept and enjoy the show with no trouble, so maybe I’m the cynic.

I feel compelled, because this is the question that you’ll ask of your play group if you don’t hear it from me, to comment on whether I think the show is “worth it.” My honest answer is that there is a whole lot of good children’s theater out there with significantly lower ticket prices. Harold was not categorically better than shows we see regularly at Heart of the Beast Puppet or Open Eye Figure Theater. Our young theater-goers are spoiled in Minneapolis. As a theater experience, though, the CTM is in a different realm. The theater is grandiose, the atmosphere is festive. This is special occasion theater. If you can afford to treat your kids with a night out, if you want a chance to dress up a little and make an event of it, I think that your money will be well spent.

I hesitate to get too sentimental in a review of children’s theater, but I also believe that we could all benefit from spending more time reflecting on childhood. Not our own sordid experiences, but on the real lives of the young companions who we share our communities (and if we’re fortunate, our homes) with.

Local artist Ricardo Levins-Morales produced a poster that reads, “Children are not ‘an investment in the future’–they are children.” To be a child is, or should be, to live in that warm bubble of possibility, to thrive there. Sure, skills built in childhood will equip us for adulthood, but let’s suppose, for a minute, that childhood is actually the whole point of it all. Harold and the Purple Crayon is a production that honors and supports that notion. Here is wonder, imagination, bravery, friendship, and a cookie at intermission. Unless your kid is categorically afraid of puppets, nothing is too scary. And nothing is too complicated. Some adults might feel that nothing is too interesting, either, but I suspect we’re just out of practice. If you bring a kid you care about to this show, let it be enough. Spend an hour-and-a-half in a soft, safe place with them, and when you’re done, don’t forget to let them know that you love them.