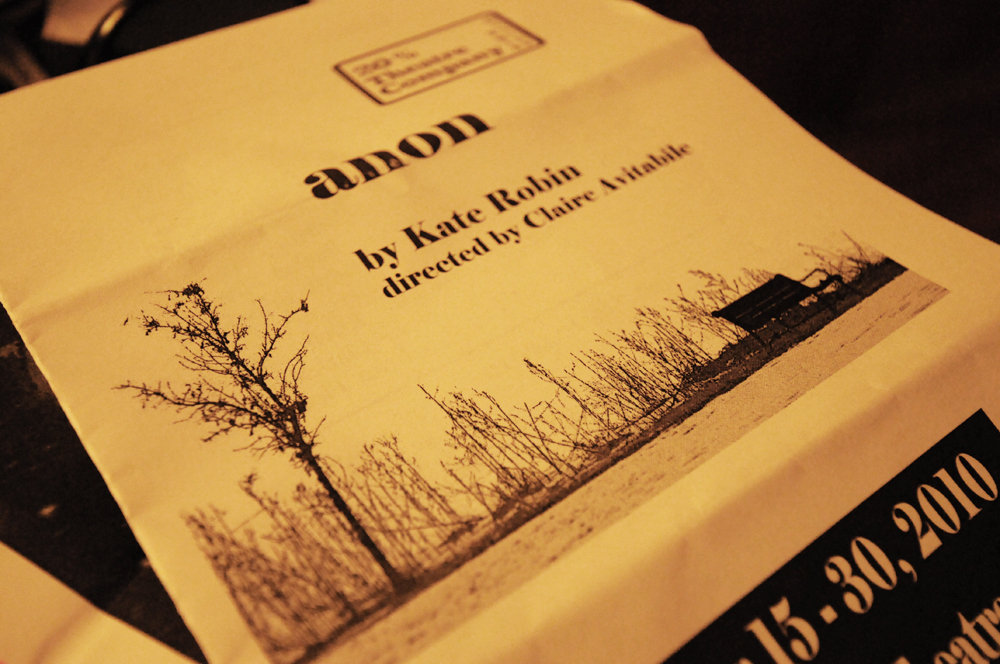 In the first scene of Kate Robin’s play Anon—now having its regional premiere at Gremlin Theatre in a production by 20% Theatre Company Twin Cities—a man and a woman tick off the pros and cons they see in one another. Anon is a play with a Message, and in my book, that’s almost always a con…but this is a production that feels astonishingly real, and that’s a pro. As the characters might say, it’s a double–pro.

The characters are Trip (Andrew Sass) and Allison (Rachel Finch), who fall hard for each other, then fall on the hard truth of Trip’s sex addiction. This isn’t the kind of “sex addiction” where the guy wants to shag his girlfriend morning, noon, and night—it’s darker and more complicated than that. Trip’s addicted to the kind of sexual pleasure that doesn’t include whispered “I love you”s, and when genuine affection in lovemaking is called for, he becomes impotent. Meanwhile, his parents Rachelle (Kathy Jenkins Piotter) and Bert (Stuart Holland) are having problems of their own: Bert’s been philandering for years, and Rachelle is at the end of her rope.

Anon doesn’t just dramatize sex addiction, it tells you about it. Allison, a pet psychologist by profession, does her research and almost literally throws books at Trip, who she also forces to attend therapy. Trip, in turn, asks Allison to attend a group for codependents, and between scenes the other women in Allison’s group tell their stories to the audience.

It’s some kind of October miracle that all these things are true of Anon, and that still it’s one of the best shows I’ve seen all year. The production succeeds by making its characters—notably the central four, most notably the central two of the central four—so heartbreakingly real that the didactic component of the show works as a hard truth we, like the characters, understand we have to swallow.

Robin has a remarkable ear for dialogue that feels genuine, drawing laughs that come from our recognition of the truth behind them. When a character has a witty rejoinder, we laugh because the line being rejoined sounds so familiar and we empathize so completely. Robin’s dialogue works so well in this production because these actors—particularly Sass and Finch—completely inhabit their characters. The level of versimilitude this production achieves is truly a rare thing.

If you’ve seen plays anywhere other than the Children’s Theatre, you’ve seen situations like this portrayed on stage before. Wrestling with their interlocking pathologies, Trip and Allison might remind you of the dueling lovers in Walking Shadow’s Fringe show See You Next Tuesday; for their part, the middle-aged pair of married battleaxes are standard issue in plays by Albee and a million wannAlbees. You’ve never seen these characters portrayed like this, though. Robin’s characters aren’t armed with quivers of quips, they’re crippled by their own demons and by the challenges of communication—but they’re all good people, and this cast shows us how much the characters genuinely care for each other. They don’t want to tear each other down, they want to build each other up. They just don’t always have the right blocks.

Everyone here is good, but Sass and Finch are revelations. They have the most believable romantic chemistry I’ve ever seen between two actors sharing a stage. For comparison, I think back to the sizzling ardor between Anna Sundberg and Clarence Wethern in Walking Shadow’s Some Girls—but those characters were playing Neil LaBute’s flashy and dangerous game of seduction and deception. Sass and Finch are just flirting with each other, and making out, and having the kind of awkward relationship talks you might hear in any apartment in any city.

When you see Anon (and you should), look at the level of physical comfort—have you ever seen two actors really kiss like that? And look at the attention to detail: the way Finch drapes her leg over Sass’s to make him feel comfortable, or the way Sass straightens the remote controls on the coffee table (like an actual human being would) instead of looking straight into Finch’s eyes (the way a character in a play would) when he’s talking about their sex life. Look at the quick little half-smile Finch gives Sass when she’s trying to be understanding, but is confused and hurt inside. I’d previously seen Sass prancing charismatically around a park in a minor Shakespeare play, and seen Finch make the most of a cookie-cutter role in a disappointing Fringe show, but I sure didn’t see this brilliant pas de deux coming. Their work in Anon feels so human it hurts.

Piotter and Holland are also very good, but their characters are less dynamic—they’re at the end of the process Sass and Finch are portrayed as beginning. Great credit is due to director Claire Avitabile for superb casting and coaching not just of her four leads, but of her ten (!) supporting players, each of whom makes a strong impression.

Nobody likes to be preached to about psychological health and cycles of dysfunction, particularly when they’re in love. I know. I’ve been up and down the relationship rainbow three times in the last five years, getting lots of advice from lots of people and necessitating two stints in therapy. When things are going really badly wrong with a relationship that means the world to you, you want to understand what’s going on—but you also really don’t want those sun-faded posters and dusty brochures to apply to you or the people you love. Your love envelops the things that are fucked up, like a tree growing around a rusty road sign that’s been nailed in, but they keep hurting, and eventually you have to face the hard truth that those damn brochures might be right about what’s going on in your life.

There’s a lot of brochure-waving in Anon, and by the end, the main characters’ traumas have piled up to a level that strains credibility, but the characters and performances feel so true that the show is ultimately successful in its argument that it’s the very fact of the traumas’ incredibility that causes them to pile up. It’s because you don’t believe this could be happening to you that it happens again, and again, and again. Allison, Trip, and the supporting characters in Anon are standing up to say, “This is happening to me…and I want it to stop.” This production’s great achievement is that we believe them.