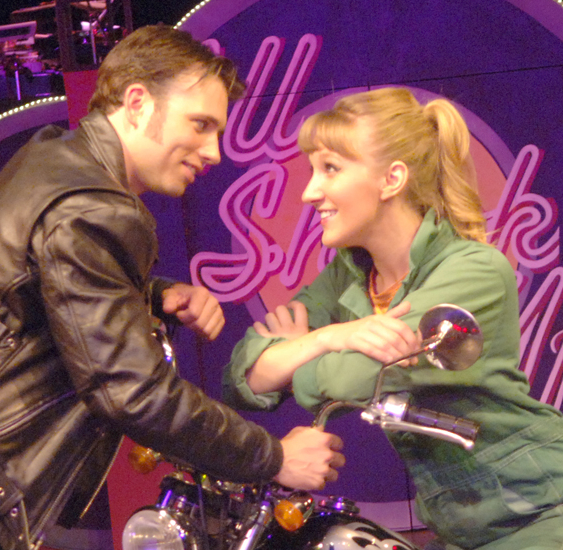 Now playing at Chanhassen Dinner Theatres, All Shook Up by Joe DiPietro is a musical romp in the style of Mamma Mia!, using Elvis Presley tunes to tell the story of a guitar-playing roustabout who changes the lives of the citizens of a small, conservative town in 1955. This show also cleverly invokes the spirit of countless worthy predecessors including The Music Man, Hairspray, Footloose, and even Shakespeare.

Chad is a charming, womanizing guy whose motorcycle breaks down in a middle-America town where excitement is outlawed and monitored by the mayor. There he meets Natalie, a female grease monkey who immediately falls in love with him and his spirit of adventure. (None of the ladies can help falling in love with Chad, but Natalie is particularly affected.) After Chad puts a quarter in a broken jukebox, mayhem breaks out in song and dance at Sylvia’s Diner, where townspeople are transformed into excitement-seeking lovers, and all their secret longings are brought to the fore, including endearing nerd Dennis’s love for Natalie, Sylvia’s love for Natalie’s widower dad, Jim, and a young interracial couple’s love for each other. Another newcomer to the town, a voluptuous blonde museum curator, stirs an awkward competition between Jim and Chad, who both find her irresistible. The mayor is scandalized by all these couplings and Chad goes into hiding at the abandoned amusement park to avoid being arrested. Meantime, Sylvia’s daughter Lorraine, an African-American teenager, plots her escape to a more welcoming place with the white mayor’s son, Dean.

This number of romantic subplots is in keeping with the show using as many well-trodden comedic elements and plot devices as can fit alongside the couple of dozen Elvis tunes. There are no slow points in this production; the entertainment just keeps coming full throttle. All Shook Up may work better than Mamma Mia! because Elvis songs seem more suited to telling a story and creating moods than Abba’s, though the writer did take a few liberties with the lyrics and arrangements to make them fit situations better. The emotional high point of the show occurs when Dean and Lorraine, the interracial couple, face their fear while singing “It’s Now or Never” and decide to stay together in spite of their parents’ disapproval. The crowd cheered wildly in the first act when Lorraine and Dean were reunited. “One Night with You” became the punch line for a number of hilarious situations throughout, while “You’re the Devil in Disguise” featured a clever guitar solo face-off between Chad and the mayor. The script may be simple and somewhat clichéd, but the music worked beautifully.

Standouts in the cast include Rico Heisler as Chad, who makes the shallow, ladies’ man roustabout a lovable and talented dolt who shines onstage. Think John Travolta as Vinnie Barbarino and you will see a resemblance. Aimee K. Bryant as Sylvia displayed a remarkable vocal range and sublime musical interpretation; unfortunately, she had only a few opportunities to showcase her gifts. Jay Albright as Natalie’s dad, Jim, is a master of comic timing in addition to having a lovely singing voice. Laura Rudolph as love-struck Natalie does not have the benefit of having as distinctive a character as Chad’s, but her excellent singing distinguishes her performance.

Production values across the board are top notch, especially the glorious costumes, which occasionally distracted me from watching the story. The costumes are so spectacular that they alone are worthy of a night at the theater. The band is tight and provide perfectly balanced accompaniment. The set is colorful, creative, and functional and rearranged quickly as needed. Some of the memorable elements are Chad’s motorcycle and the sheriff’s police car, both in action on stage.

On opening night the full house surged with anticipation and excitement; the audience fully expressed its appreciation of the production throughout the performance. Take their word for it: if you’re looking for that mix of campy fun with music and song, then this fast-paced romp is a good bet. What you won’t find in this show is profound meaning or heavy drama. Musical fans of all ages, whether or not they’re familiar with Elvis’s music, will find All Shook Up appealing, but it will really hit a sweet spot for those who love his music. You’d be no fool to rush to Chanhassen Dinner Theatres to find out for yourself.