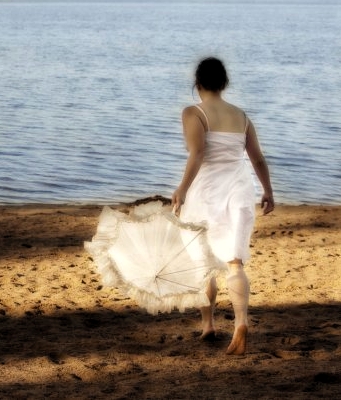 Though I’m used to seeing shows in small venues, every so often I see a show that’s so accomplished and absorbing that it’s a little astonishing when a scene ends and there’s only a small spattering of applause, rather than the thunder you hear at the Guthrie or the Orpheum. The entrancing Awakening being presented by Savage Umbrella and 3AM Productions at Gremlin Theatre is just such a show. It’s tart and beautiful and funny and free—the perfect show for this capricious, long-awaited spring.

It’s a premiere production of a script by Laura Leffler-McCabe, who also directed, with music composed by Candy Bilyk and performed by a graceful trio of instrumentalists with singing by the cast. The source material is Kate Chopin’s 1899 novel of the same name, a Victorian melodrama set in Louisiana. It’s an evocative setting—all the more so 1.1 centuries later—and it’s captured brilliantly by the performances, the music, and Justin Hooper’s inventive set design, which has characters hopping among whitewashed islands of decking from which a bed and a table pop up as needed.

The basic elements of the story are well-trodden: forbidden love (see Romeo and Juliet), a repressive, gossipy society (see The Age of Innocence), sexual gamesmanship and betrayal (see Dangerous Liaisons). Edna Pontellier (Sarah Teich) is a young mother of two, married to a man (Alan Wales) who sees her as a building block in his social and financial empires. She’s captivated by the romantic Robert Lebrun (Carl Atiya Swanson, a friend of mine and a Daily Planet writer) and, later, the womanizing Alcee Arobin (Daniel Joeck). As she takes one liberty after another, she presses the limits of what society, and her conscience, will allow.

For those who have seen Kneehigh Theatre’s Brief Encounter at the Guthrie, the parallels are many. Not only is the fundamental dilemma the same (love or conscience, in the context of a society with strict and unfair expectations); video projection, sound design, and movement in both productions support aquatic metaphors, with the characters caught up in waves both emotional and literal. Further, both productions have big casts that contrast sincere leads with comical supporting characters. What’s more extraordinary than all those coincidences, though (The Awakening has been in development for months, since long before anyone involved saw Brief Encounter), is the fact that both productions work so well, and for many of the same reasons.

Both productions also have actors performing evocative live music, and here is a hint at the differences between the two. While Brief Encounter uses Noel Coward’s sophisticated but heartbreakingly limpid songs, Bilyk’s music for The Awakening is dark, complex, and thorny. It’s often pretty to listen to, but it’s never easy listening: as was the case in the music composers like Gustav Mahler and Richard Strauss were writing in Kate Chopin’s time, Bilyk’s melodies are elliptical and challenge the ear’s expectations about tonal structures and chord progressions. It’s hauntingly apt for this story of a woman who longs to break free of social strictures.

The Awakening‘s characters are also more complex than Brief Encounter‘s, and the uniformly strong performances from a very well-cast troupe underline that fact. Robert’s virtue—though he’s an inveterate flirt, he never actually beds his targets—is also his vice, insofar as it effectively freezes him in the strict mores of his time and doesn’t acknowledge any possibility of a higher virtue. Swanson is pitch-perfect: we see that the sincere respect hiding beneath his rakish exterior is exactly what Edna falls in love with, but is also a quality that might turn her off if it paralyzes him when he needs to act. As Edna’s other suitor, Joeck is appropriately unapologetic: Edna at first is repulsed by his brash advances, but is also attracted to his decisiveness and his honesty.

The production is deeply stocked with memorable performances—among them Alexis Clarksean as a lonely woman who speaks in riddles but knows that the right person would catch her drift, Lacey Piotter as a friend who has her own ideas about what’s good for Edna, and John Zeiler as Edna’s father in a turn that would steal a lesser show—but Teich is the show’s linchpin, and she holds fast. The script does not paint Edna as a particularly likable character: she neglects her children, she’s rude to her friends, and she entertains suitors despite the fact that her husband, for all their differences, sincerely adores and remains devoted to her. Still, Teich wins our empathy with a brave and nuanced performance; we see her character’s complexity, and we feel her pain. One of last year’s most-praised performances was Greta Oglesbly’s turn as the title character of Caroline, or Change, and Teich shares Oglesby’s willingness to sacrifice likeability for virisimilitude. In the end, we care about her all the more because of it; after all, some of the real-life people we love the most are also those we hate the most.

Leffler-McCabe sweeps the production along in a well-balanced, well-paced, and rich staging. She and her cast have had much more development and rehearsal time than is typical for a production of this scale, and it shows in every scene. Leffler-McCabe directs her large cast confidently, making full use of the performers and the multi-level stage; for example, Mike Davidovich and Emily Dussault play an infatuated young couple who make appearances in a number of early scenes, including those in which they’re not the main action. It’s a classic crimes-and-misdemeanors echoing gambit, and here it works wonderfully. The show’s dance elements are subtle, effective, and well-integrated with the narrative elements.

Most essentially, though, Leffler-McCabe demonstrates a sure sense for what works—and, crucially, when. Children are often seen on a video screen, but at a climactic moment a single child (Evan Tredal) actually appears briefly onstage. He’s cute and charming, but you can see cute and charming kids at any parish Nativity pageant, and you’re not going to give a parish pageant a Tony (or, as the case may be, an Ivey). Here, the boy’s appearance is devastatingly well-timed—in context, the appearance of this sweet kid is a deliberate act of emotional violence, a fact that Leffler-McCabe, with support from actors Teich and (in a second role) Davidovich, makes as clear as ice.

The Awakening is an amazing show: it had me on the edge of my seat, and on multiple occasions wanting to jump out of it with cheers. “Critics are so cynical,” someone said to me after reading my negative review of The Wizard of Oz. I mean, how can you not love The Wizard of Oz? It’s because when you’re a critic, you see a lot of shows—which means, luckily, that every once in a while you get to see a show like The Awakening, and you see just how rewarding theater can be. That’s a phrase I also used in my review of Brief Encounter, a production by one of the world’s most acclaimed theater companies. Neither 3 AM nor Savage Umbrella are quite yet what you’d call world-renowned—but if that’s what they’re shooting for, The Awakening is a pretty damn good start.