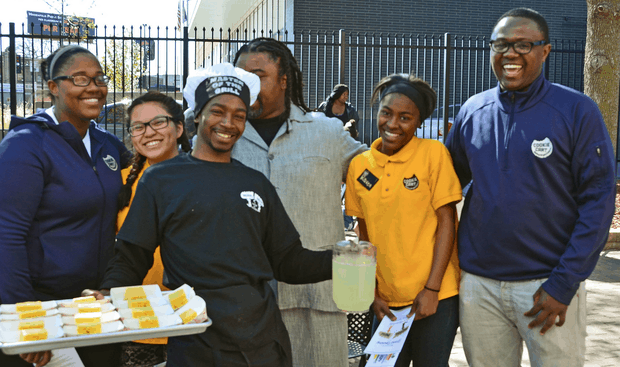 The newest dining light to wink on along North Minneapolis’ West Broadway is the Breaking Bread Cafe, whose grand opening Wednesday morning brought nearly 200 movers, shakers, gourmands and local residents to share appetizers and hear from its creators about how it came into being.

A great deal of the credit for this new business goes to the non-profit Appetite for Change, whose co-founder and director Michelle Horovitz spoke of the need for an enterprise which uses food as an agent for health and social change. Emcee A. J. Briscoe introduced a roster of guests, including Mayor Betsy Hodges and husband Gary Cunningham, director of the Metropolitan Economic Development Association (META), who  welcomed the new restaurant as a real addition to the North Side and also as a family affair; executive chef Lachelle Cunningham is Gary’s daughter.

Travel Channel’s Andrew Zimmern, host of Bizarre Foods and a native New Yorker, remarked that “Breaking Bread being here is a great opportunity for the neighborhood and for my adopted city”.