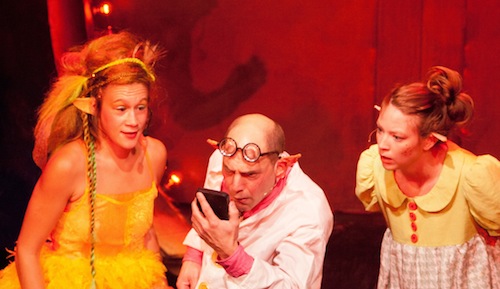 The first Learning Fairy production debuted last year, and now the rapping, super-energetic fairy (played by Zoe Sommers Haas) is back, along with her cohorts Mr. Make It (Julian McFaul) and Questioning Girl (Carly Wicks) and her band: Bassey (Noah Sommers Haas) on bass guitar, Jingle Jang (Max Specktor) on keyboard, and Old Timey Ding Bang (Michael Sommers) on drums. Along the way they introduce us to a whole slew of creatures such as Flumpy, the flying pig, Scrawny the Bean Pole, and other miscellaneous ghosts, snowmen, cats, etc.

There’s no real plot; the production has a variety-show structure. The Learning Fairy and her gang have entered a portal into Earth, and share with the audience their insights and questions about a list of themes including fear, community, friendship, etc. Every time a character makes a definitive statement of any kind, everyone shouts “Share!” and a big sign with the word lights up.

This is Open Eye Figure Theatre 2.0. Not only does it showcase the considerable talents of Zoe Sommers Haas, daughter of Open Eye founders Sue Haas and Michael Sommers (who stars in the production and created the lyrics), and her brother, Noah Sommers Haas (who composed the score along with former RNC 8 member Max Specktor), it was also co-directed with Michael Sommers and Molly Van Avery, an artist who has received support and training from Open Eye in recent years.

Artistic producing director Sue Haas says that the company in recent years has begun to identify itself as a training organization, focusing on developing emerging and mid-career artists. The Learning Fairy illustrates the wisdom of this decision. It’s a show that has a lot of youthful energy and creativity, while at the same time clearly manifests the professionalism and expertise lent by Michael Sommers’s hand (he designed the set and puppetry as well as performing in the band).

Zoe Sommers Haas is simply stunning in the title role. The woman has so much energy, it’s amazing. She’s funny, she’s charismatic, and she looks great in her space-age hoop skirt, designed by Liseli Polivka. Her lyrics—an assemblage of mostly rapping, although not hip-hop rapping, if you can imagine it, more like psychedelic-kids-show rapping—are fast-paced, bizarre, and delightful.

Really, all of the show’s design surprises and amazes, from Jaime Carrera’s groovy choreography to Sommers’s magnificent otherworldly set and puppets, to wacky hair sculptures created by Steve Adams and Moxie Salon.

And if you are wondering whether this show would be entertaining for kids, it totally is. On the opening Saturday performance, the children in the front row often got the jokes before the adults, and seemed to appreciate the physical humor (pratfalls, etc). They didn’t seem bothered in the slightest by the show’s non-narrative structure. It’s really a wonderful show for both adults and kids alike; make sure you don’t miss this one!