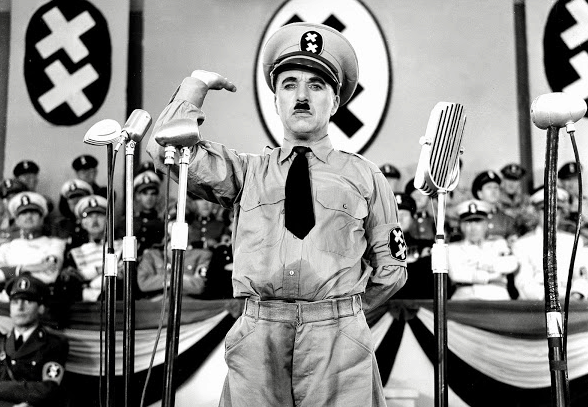 Charlie Chaplin as Adenoid Hynkel in his 1940 satire The Great Dictator. All images from Chaplin films made from 1918 onwards, Copyright © Roy Export S.A.S Charles Chaplin and the Little Tramp are trademarks and/or service marks of Bubbles Inc. S.A. and/or Roy Export.

In this summer of landmark Supreme Court decisions and presidential candidates throwing their hats in the ring, it’s fitting that this July, the Heights Theater is sponsoring “The Political Circus,” a series of six classic, politically-oriented comedies. One of the comedies on the schedule holds special interest for silent film fans: silent icon Charlie Chaplin’s first excursion into sound, the 1940 film The Great Dictator.

In the film, Chaplin portrays two characters: a ruthless but ridiculous dictator named Adenoid Hynkel, and a gentle Jewish barber who looks just like Hynkel.

Hynkel was, of course, a thinly veiled parody of Hitler, and Chaplin’s decision to make a satire criticizing the Nazis was highly controversial, given that the United States was still trying to maintain a truce with Germany and not get embroiled in the war sweeping Europe.

To gain some insight into the history behind The Great Dictator, I called up renowned Chaplin scholar Dr. Lisa Stein Haven. Dr. Stein Haven is an Associate Professor of English at Ohio University-Zanesville and is the author of Syd Chaplin, a biography of Chaplin’s brother, as well as the editor of a new annotated edition of A Comedian Sees the World, Chaplin’s 1933 account of his 1931-1932 world tour that was originally published in Woman’s Home Companion magazine.

I began my conversation with Lisa Stein Haven by asking about the timing of Chaplin’s world travels, which started right after the release of his 1931 silent film City Lights and which strongly influenced his future films. His journey included meetings with such world leaders as Winston Churchill, Ramsay MacDonald, Mahatma Gandhi, and Albert Einstein. The following are some highlights of my talk with Dr. Stein Haven.

Carrie Pomeroy (CP): Why did Chaplin embark on a world tour after City Lights came out? What motivated that?

Lisa Stein Haven (LSH): As you know, City Lights was a silent film well past the beginning of the talking film period, so [Chaplin] was really worried about it. In fact, he had a lot of trouble getting theaters to even say they would distribute it or screen it. The Los Angeles Theater was completed with Chaplin’s funding so he could show it there. He also rented the George M. Cohan Theater in New York City, so he had a place to show it there. Then he’d already planned for this tour so that he could travel along with the film and show it. That was his main purpose for going, film publicity, because he was so worried about this silent film. What it ended up being was much, much more.

LSH: Chaplin didn’t really need to be traveling with his film to promote it, but what the travel allowed him to do was to meet with a lot of dignitaries and important people along the way who were actually pretty interested to meet him, too. A lot of them, like Ramsay MacDonald [then the head of the British Independent Labour party] and Winston Churchill were embroiled in the Depression and its aftermath in Europe. [Chaplin] certainly had experienced that in America but not in Europe, and in many ways, we as Americans don’t know much about what went on over there.

We can only surmise with the rising up of Hitler and such characters, that things were really bad. And Chaplin was seeing this and hearing about it from all his new political friends, so what it really ended up being was an awakening journey for Chaplin in terms of his own political ideals, his political education, and his ability to feel comfortable talking with these great people about political ideals. It was something he was dabbling in before, but this was the first time that he was going to be approached as someone who had something important to say about it.

It ended up not just educating him, but changing his whole way of making films afterwards. Before the trip, he was pretty much against the whole didactic film idea, where the film teaches about something important. Afterwards, he wasn’t. He was wanting his films to have messages.

CP: Do you think it was because he was so influenced by what he saw, that he thought it was part of his job as a filmmaker, to have messages?

LSH: Not really. He was just so overcome by becoming part of that conversation, that it was just a natural, organic thing to have it outflow from his creativity. . . He was always a liberal beforehand. I think he was a really, almost a very far left liberal by the end of that trip and remained so. A lot of people in our country want to describe that as communism or socialism, but he called himself a liberal. I think it’s a good description of what he was, not communist or socialist at all.

CP: When you watch The Great Dictator, what strikes you as being especially connected to Chaplin’s world travels in 1931 and 1932?

LSH: Of course, all the little tiny details. I don’t know if you’ve ever been to Germany, but along the edge of the buildings, there are all these gargoyle-like characters, all these statues, rows and rows and rows of them, that he accurately recreates in the scene when Hynkel is parading through town and kissing babies and all that sort of thing. So certainly the details of Germany and Berlin and the patriotic fervor that was going on there that was out of control, he’s portrayed all that.

It’s hard to think of a mass killer as a humorous individual–and I’m including Mussolini in that–but [Chaplin] was able to find that fine line between horror and comedy, which is really hard to do.

CP: At the very end of The Great Dictator, Chaplin features his character the Jewish Barber giving a long, impassioned speech about the need for more humanity and kindness and less violence and hate. Many people think the speech was an artistic mistake that mars the film, yet the speech has taken on a life of its own. A quick search on YouTube yields dozens of video tributes that people have made using the Great Dictator speech, and many call it the best or greatest or most important speech ever made.

What’s your take on that speech?

LSH: That final speech is, to me, the statement that Chaplin had been wanting to make since he’d arrived back in California in 1932. That particular speech is lambasted because it doesn’t seem to belong in that film; many people have said it seems to be Chaplin standing up there giving that speech, not Hynkel or the Little Barber. In that sense, it’s a bit artificial, and perhaps it ruins the end of the film, because of that.

However, having seen drafts of that particular speech and seeing how much he changed from A to Z, you understand why so many people have now clamped on to it as a standalone entity, because it says everything that we all want to say about everything that’s going on even today. It’s very prescient. It has not aged, unfortunately. The same things are still going on.

I think [the speech] has had a long life, starting with being part of several events in Washington, DC, including FDR’s inaugural banquet. It was recited there, it was recited in Constitution Hall. That afterlife that it has had began immediately, and it hasn’t really ceased. I think [Chaplin] had been sitting on that fireball for quite some time. That’s why he’s so impassioned when he’s delivering it.