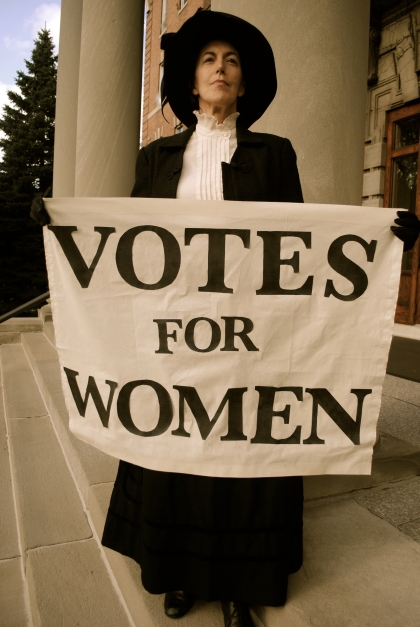 The fight for the right to vote. The government imposing invasive medical procedures on women’s bodies against their will. With subject matter like that, you could unfortunately be forgiven for thinking this was a play about modern-day America. And in a clever way, it is. But on the surface, Theatre Unbound‘s world premiere of Anne Bertram’s new play The Good Fight is instead about the early 1900s, in Britain. Despite ongoing progress, it would seem we keep fighting a lot of the same battles in new ways.

“I mean to be a voter in the land that gave me birth.”

The Women’s Social and Political Union (WSPU) has been taking their fight for the right for women to vote to the next level: inflicting damage to property. Even unwelcome attention to the cause is still attention. WPSU leader Emmeline Pankhurst (Delta Rae Giordano) is using her court appearances as a chance to get the WPSU’s grievances on the public record. With Emmeline in jail and her daughter Christobel (Laurel Orman) only able to backseat-drive the WPSU from her place of exile in France, it falls to Grace Roe (Jennifer Kudelka) to keep the momentum of the suffrage movement going.

“The only lives in danger are our own.”

Thankfully, Roe has plenty of help. The steely Harriet Kerr (Ellen Apel) keeps the office running and communications flowing, even when the office is under attack. Gertrude Harding (Kara Greshwalk) is willing to get beat up while simply hawking the WPSU’s newsletter. Cicely (Heather Burmeister) may be a little too slavish to detail and order, and thus easily frazzled, but she’s relentless, and her heart’s in the right place. When disguise and subterfuge are needed, chorus girl Hilda (Erin Denman) is an invaluable resource. And when Emmeline’s hunger strike is countered by the prison authorities force-feeding her against her will, the desperation of Emily Davison (Julie Phillips) drives her to go to extremes that no one on either side of the battle expected.

“A martyr lights the way.”

Though the women have always eschewed violence directed against people, it soon becomes clear they all need to learn how to defend themselves. Ingenuity will only get them so far in their efforts to protect Emmeline out on the speaking circuit. They have to be willing to fight off the cops (Duane O. Koivisto, James Lekvin, and David Schlosser) who are more than willing to fight them. Marital arts is the answer, and the WPSU’s lessons in jujitsu mean that things get even more interesting. Act Two includes one fight sequence after another (Mike Lubke’s fight choreography is a lot of fun to watch in action, and fitting for the different personalities of the ladies involved).

The trouble with this strategy, of course, is where does it stop? When your enemy is happy to escalate the hostilities, things can get out of control very quickly. What targets become acceptable? What aren’t you willing to rationalize? Where do you draw the line? Does the end ever justify the means?

“The police claim to have been mercilessly poked.”

The audience becomes complicit in this. We’re rooting for the ladies to stick it to the police. We’re also enjoying watch them work the system, to gain visibility and finally be heard. It’s satisfying to watch them fight back, to stand up for their cause—but it’s a long way down that slippery slope.

“What are you going to do about their hats?”

Playwright and executive director Anne Bertram has been with Theatre Unbound from the beginning. Over the years, Unbound has staged a half-dozen of Bertram’s scripts. It’s no secret that I’m a big fan of Bertram’s work. Her spare, precise use of language is stunning to me. She accomplishes so much with so little. This production is another example, a complex and entertaining two acts still clocking in at less than two hours.

But it’s been a puzzling pattern for me that Unbound has never quite been able to get a production to to live up to the potential of her scripts. It’s almost as if the people at the reins didn’t fully trust the words, thus feeling the need to layer on production concepts that often end up being at odds with the text rather than supporting it. Recent years have seen marked improvement. Their development of Bertram’s script Murderess in 2009 and 2011 was a huge step forward. The direction and acting in Murderess matched the script beautifully. Only the aggressively spartan design concept made the thing seem a little rough around the edges.

With The Good Fight, the artistic partnership of Theatre Unbound and the playwriting of Anne Bertram is at last one of equals, each making the other better. Director Carolyn Levy keeps the whole thing moving along at a steady clip that still gives the quieter character moments room to breathe. The whole ensemble of actors digs deep into Bertram’s words and finds all kinds of delightful, funny and heartbreaking character detail.

“The man farthest down is woman.”

Unbound’s design team has also stepped up and created a fully realized world that takes over the Lowry Lab Theater space rather than being swallowed up by it (a constant challenge in this venue, here successfully met). Sadie Ward’s set design uses every inch of space, and director Levy inventively uses both the set and areas in the midst of the audience to open up the environment of the story. Anita Kelling’s sound design and the added use of live sound (everything from singing to crowd noise to gunshots to screams) broadens the scope of things still further. This is a presentation that feels as big as its subject matter. There’s room here for a real battle.

The heart of what makes this production (and script) so good are the characters and the way the actors breathe life into them. Of particular note are Delta Rae Giordano and Julie K. Phillips in a scene where Emmeline is visited in jail by Emily. Emmeline, on hunger strike, is being force-fed and otherwise mistreated. Emily recalls her own stints behind bars, and the psychological scars that force-feedings had inflicted on her. Emmeline’s health is failing, and Emily’s will to live is failing. Emmeline digs down deep and finds the power she needs to break through Emily’s despair and encourage, even command her, to keep going. “Love life! Fight for life! A better life, until you break.” It’s an incredibly moving moment, and some of the best work I’ve seen from either actress. It’s also a scene which marks a clear turning point for the characters, their cause and the larger story as a whole. When you go to see the premiere of a new play, this is the kind of thing you hope to see. It’s doubly wonderful because it’s so rare.

“We can’t build a beautiful world on the ruins of a church.”

Mention must also be made of Ellen Appel and Jennifer Kudelka in another key scene where Harriet confronts Grace about the WPSU’s change in tactics.  When fires and bombs start to hit churches, Harriet has reached a line she cannot cross. Since Harriet has always been the one with the coolest head of the bunch, when Harriet thinks the movement has begun to lose its way, both the audience and the other characters take notice. Even as Grace tries to explain away Harriet’s objections, she also gets the sinking feeling that Harriet is right. Anything that doesn’t look like the better world they hope to create must be a step in the wrong direction. Can you do the wrong thing for the right reasons? Or do the two things cancel one another out and leave you nowhere?