Ali Rose Dachis in The Edge of Our Bodies. Photo by Heidi Bohnenkamp, courtesy Guthrie Theater.

After seeing the opening night performance of The Edge of Our Bodies at the Guthrie Theater, I tweeted a “one-hashtag review”: #whitegirlproblems.

That’s a little simplistic, of course: the themes of The Edge of Our Bodies are universal to the human experience. That said, the concerns and experiences of white 16-year-old New England prep school girls are not entirely foreign to the American stage, and even less so to the American page. Is Bernadette, the play’s narrator and central character, upset with her parents and their troubled marriage? Is she confused about her budding sex life, both excited and troubled by the attention she now receives from boys and men? Is her curiosity piqued by the dangerous, thrilling streets of New York City? Why, yes! Yes, yes, and yes.

What distinguishes playwright Adam Rapp’s accessible, dryly humorous script from the average coming-of-age tale is its meta-theatrical formal structure: for almost the entire play, Bernie (Ali Rose Dachis) is the only character on stage. She’s telling a story, seemingly about herself, but we learn that she’s an aspiring fiction writer, so the story may not be entirely true. She sits on the stage of her school production of Jean Genet’s The Maids, and occasionally interrupts her monologue to perform scenes from that play. Near the play’s conclusion, there’s an avant-gardish theater-of-disruption moment that, like most theater-of-disruption moments, isn’t really all that disruptive.

Though the script does a lot of huffing and puffing to blow down all the usual houses, the Guthrie production is well-served by Dachis’s focused, often riveting performance and by Benjamin McGovern’s dextrous direction. The play has much more texture than the average one-person show—both because of the scripted interruptions and because McGovern so skillfully conducts Dachis through a quiet decathalon of stage business that has her frequently changing her appearance and position, using the Maids props and stage (a beautiful set by Michael Hoover) to evoke her transitions from one place to another in the story she’s telling. There are a couple of particularly dramatic transformations, one of which makes awkward use of a certain M.I.A. song that will start pulses racing among redheads in the audience.

The talk about this production will be about Dachis’s performance, and she is indeed very good. Under McGovern’s direction, she steers right into the material rather than either trying to be excessively naturalistic or distractingly stagey. This is a production that hugs its material so tightly that you hardly notice it’s regularly hitting potholes of starchiness, preciousness, and cheesiness. As coming-of-age theater with an existential, experimental bent goes, this is as close to a popcorn show as you’re going to get. Check it out, and bring your mom. I did. 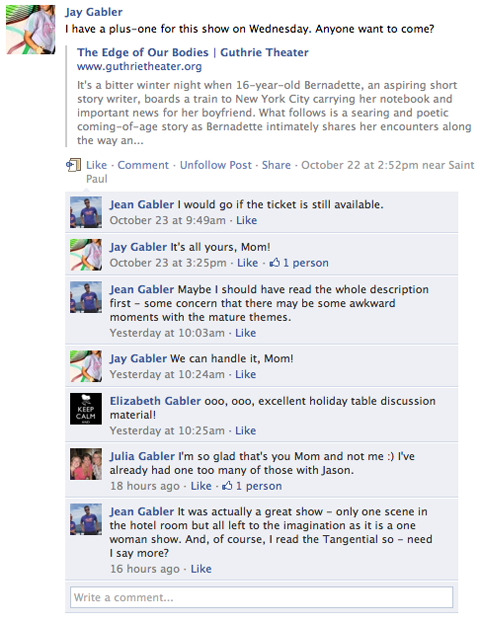