The Tet New Year is the most important and highly celebrated cultural holiday of the Vietnamese people around the world. It is the largest annual Vietnamese community event in Minnesota and regularly draws thousands of people to celebrate a day of food, entertainment, fashion, children’s activities, and dancing.

Lyly Tran, event chair, said the Hoi Cho Tet 2011 was a huge success. With attendance at double the 2010 numbers she estimated that approximately 2,800 guests were in attendance along with 140 volunteers to make the day a complete success.

“Our goal this year was to draw in a younger crowd, yet try to retain the cultural and historical meanings of the New Year,” said Tran. “With all of the hard work put forth by our team, we were successful in hosting yet another New Year’s Festival.

The Tet event also attracts big performers from the Vietnamese community in California. They performed later that evening at the Tet New Year’s Formal held at Lucky Dragon Restaurant in Minneapolis.

“It was also an honor to host Paris by Night singer Huong Giang as well as the Vietnamese American band Thomas’ Apartment,” said Tran.

Longtime VCM President Phuong Dao left last year to move to Boston, and the Tet fell under “new management,” according to Lyly Tran, who said long time volunteers were joined with a fresh set of faces behind Cong Dong Vietnam Minnesota. 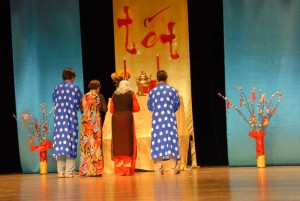 The event still begins with a presentation of flowers and incense by elders before an Ancestral alter on state. Dignitaries then offer morning speeches and included Minnesota Attorney General Lori Swanson.

The all-day event was intermittently filled with competition segments of both the Mis Ao Dai and Mr. Viet pageant. The Mr. Viet returned after it had been discontinued in recent years.

Lyly Tran said both pageants were a big success and are always popular with guests that pack the auditorium to watch the various competitions from talent, fashion, speech, community and cultural knowledge.

Tien Si Nguyen outlasted the competition to be named Mr. Viet for 2011. Luu Pham was 1st Runner Up, and Andrew Nguyen was both 2nd Runner Up and Mr. Charming.

Tet Festival highlights included a Children’s Entertainment Program of choreographed traditional dances, songs, talent shows and folktales. It’s a chance for youth to showcase the cultural heritage they learn from their parents and grandparents, and through classes at churches and temples and the Vietnamese Community of Minnesota.

Area martial arts schools also put together demonstration performances and help to put together the big lion dance with firecrackers, gongs and drums for stage and all around the school where guests enjoyed a food pavilion and several cultural exhibits, resource booths and venders.

There are also sports, cultural and academic competitions that take place throughout the year, and the winners are presented trophies at the Tet. This year featured a Pho (Vietnamese beef & noodle soup) eating contest, tennis, table-tennis, bowling, volleyball and other sports competitions, a StarCraft tournament and a Vietnamese Idol Karaoke contests.

Phuoc Thi-Minh Tran organized the cultural exhibits and children’s activities as she has for many years. She is a librarian and also organizes Tet events for Oxboro and Augsburg Park branches of the Hennepin County Library System.

She recently produced a book on her refugee experience that introduces the wealth of Vietnamese culture in a book called Chuyen Xa Gan.

Most Lunar New Year announcements for 2011 will call it the Year of the Rabbit, as the zodiac depicts in China, Japan and Korea. The Vietnamese people represent the rabbit years as a cat.

The Vietnamese Student Association of Minnesota (http://vsamn.com) will hold its annual Tet Show on Saturday, February 5, 2011, from 6:00 to 9:00 p.m. at Ted Mann Concert Hall, University of Minnesota, 2128 South 4th Street, Minneapolis, MN 55455. Admission, snacks, and drinks are all free.

Visit the Vietnamese Community of Minnesota online at www.vietnam-minnesota.org.