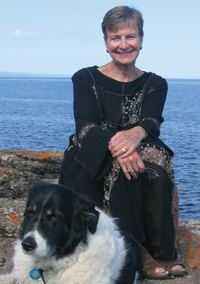 After 15 years living as a Poor Clare nun Bissell found her voice as a writer.

Against her family’s wishes, 18-year-old Beryl Bissell entered Poor Clare monastery in Bordentown, N.J., expecting the dozen towels and face cloths in her nun’s dowry trunk to last a lifetime. Nearly 50 years later, Bissell’s new memoir, The Scent of God, tells of her 15 years in the cloister and her “sudden U-turn” back into society.

Growing up in Saddle River, N. J., Bissell turned to the Catholic faith at a very young age, a reaction to her father’s alcoholic binges and her mother’s ensuing rages.

After her father lost his position as vice president of a bank, the family moved to Puerto Rico for a new start. When she was 13, she witnessed a boy drown in the ocean and began to ponder life and death while her mother, oblivious, riddled her with mixed messages about Bissell’s emerging sexuality. The confused girl again took refuge in the unconditional love offered by God.

In the cloister she was called Sister Mary Beatrix (Bearer of Happiness) of the Holy Child Jesus. As a postulant, she quickly gained weight from the starchy food and then struggled for several years with anorexia. But she savored all aspects of the life, from the daily chores of baking bread and caring for nuns in the infirmary, to the liturgy, to the silence.

Then, in 1969, Bissell received permission to temporarily return to Puerto Rico to help nurse her ailing father. Once there, with everything “so different from the stark white walls of the monastery,” her senses awakened to the colorful, vibrant world she had forgotten.

A forbidden love
At first, Bissell was put off by the theatrical manner of the Italian priest who ran the mass at a local church and visited her ailing father. Nearly twice her age, Padre Vittorio loved being a priest as much as she loved being a nun. Reluctantly, they fell in love.

For several years the two fought their feelings as Bissell alternated between the monastery and Puerto Rico. But their chaste kisses grew more passionate. Bissell writes of her torment: “Show me what you want, God, I prayed. You choose! God, of course, did not answer. God doesn’t get involved in matters of free will….God would continue to love me, either way. But would I love myself?”

Eventually Bissell and Vittorio left their vocations, married and started a family. Their two children were still toddlers when tragedy struck: Vittorio died of cancer.

Contemplation of a writing life
As compelling as Bissell’s memoir is the story of her surprising literary ascent. For a woman who emerged from the cloister at age 33 with no formal education past high school, writing seemed an unlikely second vocation. A stylish and petite woman, Bissell, now 66, recently reflected on her literary and spiritual journeys from her home along the North Shore near Shroeder.

She moved to southern Minnesota after Vittorio’s death and went through a dark period when she felt she lost her sense of who she was. While a single mother of two, working full time, she enrolled in classes at Anoka-Ramsey Community College in Coon Rapids, and in 1996, at age 56, she finished her degree in literature at Metropolitan State University in St. Paul. A 1997 Creative Nonfiction Award from the Loft Literary Center gave her the opportunity to work with writer Scott Russell Sanders.

“I would submit very rough drafts, and he would write entire pages in response.” With a grant from the Minnesota State Arts Board, Bissell hired editor Brigitte Frase.

Finally, the structure of the book fell into place: a first-person narrative, interspersed with second-person recreations of the contemplative rituals in the cloister.

It was time to seek publication. One agent sent it to a second agent, who sent it to a third, who said Bissell needed to go deeper.

So she studied Catholic mystics for a stronger theological underpinning, then pulled the manuscript apart during a several-week residency at Norcroft, a writing retreat for women along the North Shore. While there, she read a novel that touched her so deeply that she wrote her first-ever fan letter. The letter led to a friendship with a well-known writer, Ann Patchett, who later connected Bissell with the agent who sold the memoir to Counterpoint.

A new life, a new voice
Bissell regained her voice during the 15 years it took to write her memoir. She also met and married her current husband, Bill Christ, and they moved to the North Shore. Then tragedy struck again. Bissell’s daughter Francesca was murdered in September 2001, at the age of 24.

“I plunged into grief and grieved and grieved. I didn’t run from it,” she said. Again, writing helped Bissell stay afloat. “It was healing when Fran died that I had written most of the memoir. I recognized the blessings in our lives. I don’t know if I would have been there in my thinking otherwise.”

These days, Bissell is frank about what she sees as failings of the Catholic church—the dogmatic emphasis on following authority rather than one’s own heart, the focus on sin over unconditional love. Even so, her faith remains strong.

Since moving to the North Shore, Bissell has worked as a columnist for the Cook County News Herald and a freelance writer. She visits sick parishioners with her husband, a Lutheran minister. Bissell still loves the Catholic sacraments, and she frets about those who leave the church. “If all the strong, truly spiritual people run from the church,” she wonders, “who will be there to leaven it?”

Worldly lessons
While in the monastery, Bissell witnessed other nuns developing into “some of the most unique, compassionate women I know.” She continues to believe in the rationale behind cloistered living. “To be filled with the presence of God—what better prayer is there?”

But of herself, she said, “I didn’t know what life was about. I needed to leave the cloister.” A nun told Bissell that she’d been called to be a “Clare in the world.”

“I’m finding so much more is sacred. Life and universe and creation and people and nature—it’s all so miraculous. The harm people do to people is profane. Our bodies, our souls, our minds, our individual thought patterns…those are the sacred things.”

“Suzanne Kelsey”:http://www.suzannekelsey.com is a freelance writer, editor and writing coach.