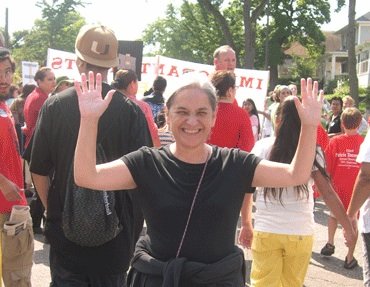 In 1995, just after the Zapatista uprising began in Mexico, Teresa Ortiz and her husband and three children moved to Chiapas, Mexico.

In the early morning of the last day of 1995, our small group of family and friends (four adults and my three teenage children) arrived in Oventik, the Zapatista cultural center in the highlands of Chiapas. … After a thorough check at the front gate, we got in and dropped our bags on the dirt floor of the hut that would serve as our dormitory. Then we turned to shake the hand of the tiny guerrilla commander. He wasn’t any taller than my 12-year-old son. He wasn’t any taller than I am—and I am a very short woman! ‘Welcome to this special place called an aguascalientes,’ he said. ‘Welcome to Oventik! Please feel free to do what you want. This is your home and you are free here. You can walk around, you can talk to people, you can run,  you can have fun, you can dance, you can sing.’ That was the first time I had ever been in Zapatista territory, and it was the first time I had ever talked to a guerrilla comandante.” [Never again, a world without us, p. 124-125]

In Chiapas, Ortiz interviewed members of the indigenous community, resulting in a book called Never again, a world without us: Voices of Mayan Women in Chiapas Mexico. “It was a way of telling the story from the point of view of the women and men themselves,” Ortiz said, regarding the Zapatista movement.

Working in Chiapas, Ortiz and her husband founded Cloudforest Initiatives, which continues as a St. Paul-based cooperative selling coffee and artisan-produced wood and iron products from Chiapas, as well as conducting travel seminars to educate people about Chiapas and Oaxaca.

Activism Across Borders:  At the suggestion of historian Peter Rachleff, we are digging deeper into ways in which immigrant communities remain connected to their home countries, in the realms of politics, activism, etc. Rachleff urged us to dig deeper into “the connections between activism ‘there’ and ‘here,’ the circulation of ideas, the synthesizing of a single struggle, albeit with many internal currents.” This article is part of the story.

Ortiz says there’s a connection between what happened in 1968 and what happened in Chiapas, the southernmost and poorest area of Mexico. “The Zapatista was truly an indigenous group,” she said, “even though part of its roots was the organizing of 1968.”

“Mexico is a country that, on the one hand, there is a lot of inequality. On the other hand, there’s a lot of organized activism,” Ortiz said. For example, in 1985, an earthquake in Mexico City destroyed a great portion of the city. Instead of the government repairing what happened, people organized in their neighborhoods, doing their own work.

These days, Ortiz tries to read about what is happening in Mexico, and Chiapas. For her, they are interconnected. “You cannot separate Chiapas politics and national politics,” she said

Ortiz returned from Chiapas to Minnesota in 2000. She said that since she’s returned, she has been involved in organizing for immigration reform, as well as organizing around the Dream Act and for drivers licenses. She sees a similarity between the organizing work that was happening in the 1960s and 70s in Mexico City and the immigrant rights movement here in the United States, as both movements focus on grassroots organizing.

The Zapatista concept of organizing and activism isn’t quite the same as a solidarity movement. For the Zapatistas, said Ortiz, the intention is you aren’t supporting the movement for the sake of the people in the movement, but rather because it will benefit you. “That’s a difficult thing for North Americans,” Ortiz said. “Even if it is people of color.”

Before going to Chiapas in 1995, Ortiz and her family had also worked in Central America. In the mid 1970s, she had visited Guatemala on her way to El Salvador.

“The day we arrived in Guatemala city, there was a state of siege,” she said. “I had never in my life experienced something like that. We stopped there and we were told we could not go out after 9 o’clock. And there was shooting in the streets and things like that. And when we went to El Salvador, we didn’t know what was happening in El Salvador either but the same thing happened.”

Back in the Twin Cities, Ortiz connected with the Resource Center of the Americas. As a Spanish teacher in the public schools, she brought her students to the center, and eventually she became active herself, joining the board.

In the 1990s, Ortiz and her husband were employed by Augsburg University in a program in Guatemala, and then later the Chiapas, in Mexico. “We were very interested in what was happening with the Zapatistas,” she said. “We had been working with the Guatemalan refugees, so we knew a little of that, and I did a series of interviews with the Indigenous Community, called Never Again, a World Without Us, Voices of Mayan Women in Chiapas, Mexico. It was a way of telling the story from the point of view of the women and men themselves.”

When she was working Chiapas and Guatemala, Ortiz recognized that she was not indigenous, but Mexican. That meant she could be an ally in the struggles of the indigenous people there, but these were not her own struggles. She described the role of allies: “They are struggling with us — that is the Zapatista point of view. You are doing it because your liberation is a part of my liberation.”

Ortiz said she feels a lot of hope with what has happened with the Dreamers movement, which has worked for legal immigrant status for people brought to the United States as children without immigrant status.

She said much is happening in Minnesota through the work of various organizations such as the Immigrant Rights Coalition and Isaiah. “All these coalitions that started working together and tried to identify what we can change. The Dreamers — they run their own show. They were the ones that organized to change things. It’s finally happening now.”