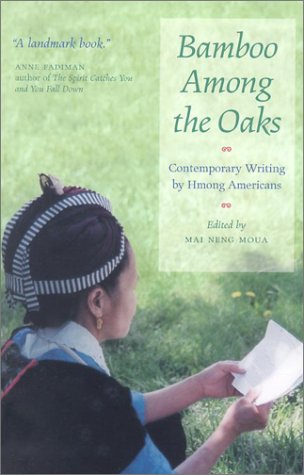 Where does a decade go? This October, the landmark Hmong anthology Bamboo Among the Oaks celebrates its tenth year since it was was first published by the Minnesota Historical Society Press. It’s amazing to see the progress the community has made in the years since, but it’s clear there is also still a long way ahead.

Edited by Mai Neng Moua, Bamboo Among the Oaks featured the work of 23 Hmong writers from across the country. When it was first released, some of the contributors wrote using pseudonyms because of the sensitivity of their subjects. Things you couldn’t talk about openly, let alone write about. That’s common in many new American communities. But Mai Neng Moua was one of the key figures creating a space for the diverse voices, the alternate viewpoints so essential to a community’s true growth.

While there was often a call among community leaders to stay united, to speak with one voice, I’ve always felt that a lack of plurality was far more dangerous to the long term interests of any refugee story. Too many fell through the cracks or left because they couldn’t see their experience within the broad narratives most often presented.

It’s often discussed that until the 1950s the Hmong did not have a written language for most of their 4,000 year history. It was not until the 1990s and the aftermath of the war in Laos (1954–1975), that a significant body of creative literary work began to emerge from the Hmong community. For writers, this was principally accomplished through the Paj Ntaub Voice literary journal that Mai Neng Moua established. There are plenty of horror stories from the early years about the static and pushback the young writers for the journal faced from outside of the community and within. But can you imagine: Being among the first of your generation to create the first literary works of your entire culture?

Nearly a decade after the first issue of Paj Ntaub Voice, the Hmong literati wanted to create something more. They shopped around the idea of the anthology to many different publishers, especially ones in Minnesota, and time and again, no one wanted to take the risk.

No one thought it was something that could be sold. Others thought the samples they were looking at had limited literary merit. Still, Mai Neng Moua and the others persisted, until finally Bamboo Among the Oaks was published and quickly sold out of its first print run. It was the first book of the MN Historical Society Press to ever be covered in the New York Times, and it has been used in classrooms around the world.

In her introduction, Mai Neng Moua posited that most of the writers included in the anthology had a number of things in common. They were emerging. They were young. They wrote in English. They were from the Midwest. There were a few exceptions. I was honored to have one of my poems and a horror story included in the collection. And in the ten years that followed, I think we can see a fascinating journey that the other writers have taken since.

Like all anthologies, some of the writers never wrote much afterwards. Some went on to great acclaim. May Lee Yang, for example, has become a prominent Asian American playwright and executive director of one of the two Hmong arts organizations in the country, the Hmong Arts Connection.

Over the years, I’ve spoken a lot about the importance of including the arts in the refugee resettlement process. Not just for the Hmong, but for all communities. As Minnesota becomes home to the Karen refugees, Bhutanese, Nepalese, Tibetans, Liberians, Somalians, and so many others, the arts are not always considered the first thing the community needs compared to shelter, workforce education, family stabilization and so on. But I’ve seen firsthand that the arts are essential to include in those humanitarian efforts.

The arts are an effective bridge for communities who are just starting to learn English to find ways to tell their stories and experiences. Back in October, 2010, I and many others organized the Legacies of War: Refugee Nation Twin Cities exhibit at Intermedia Arts. One of the pivotal pieces were a set of drawings from the 1960s created by illiterate Laotian villagers who had become refugees. The images depicted what was discovered to be a secret war, a bombing campaign that would leave over 1/3rd of Laos covered in cluster bombs. When they were shown to others, it prompted an investigation that led all of the way back to Washington D.C. and brought an end to the bombing in 1973. Nearly three decades later, those same pictures would be discovered again, almost thrown out, but instead inspired a new generation of Lao activists and their friends to rally together. Their efforts helped to encourage the eventual passage of the 2010 UN Convention on Cluster Munitions that banned the manufacture, sale, transfer and stockpiling of cluster bombs. To me that’s an amazing journey, an amazing legacy of international policy that began with a handful of amateur drawings.

To create something for which there are not yet any words. This takes enormous courage. But when a community that is growing does not see it’s journey reflected in the history books, the official records, it is faced with a choice. To remain silent, or to give voice to their experience and interweave those threads with the great American tapestry. I think we can all be grateful to Mai Neng Moua and the many other Hmong artists who paved the way.

This was my poem that I had included in the anthology. It still holds true, for me. But I look forward to seeing what the next generations will create.

I tell you, this is the last word for this war.
This little side war we were the center of.
There is no justice from poetry-
Any veteran can tell you that.

They want their land, their lives
Their livestock back.

Grenade fishing in the aftermath of Phou Pha Thi
Has lost its novelty
To the man with a bullet fragment rattling
In his body, slowly tearing him apart.

Write, they tell me. Write what?

We lost, we were forgotten, we are ghosts.
We are victims of fat tigers and foreign policy.

There is no Valhalla, only memories of Spectre gunships.

There is no Elysium, only pleas for asylum.

This jungle was filthy.

There was shit. There was blood. There were refugees
Who to this day can not explain why they were the enemy
When the Communists came.

Their sons fought. Their brothers died.

Their uncles, maimed,
were hauled screaming into the shadows of the PDJ.

Write, they tell me, so people won’t forget. So someone will know.

Lift the broken bodies with my words, bring them out
And say ‘we did not die in vain’.

For every bullet hole, let there be a word to stand as a monument.

For every lost limb let there be a sonnet to stitch the truth back together.

For every eye gone blind, let there be something to take its place.
Something. Anything.

How can you not have words for the war of whispers?

How can you not shout, now that the whispering is done?

And I swear, each time I break this promise, that the next time
Will be the last word I write about this damn war.