David McGill confronts school board about their decision to cut music from the school curriculum. (Photos by Deb Pleasants)

Superintendent Valeria Silva and the Saint Paul school board sat silently at the April 20 board meeting as a steady stream of residents marched up to the front of the packed room and voiced opposition to proposed budget cuts that will eliminate some popular school programs and close or relocate several schools. The April 20 meeting, which began before 5 p.m. for board members, ran past 1 a.m.

These proposed measures led to an uproar in the community, leading hundreds of St. Paul residents to attend the April 20 meeting. Many people were unable to enter the overcrowded main room and watched the meeting on a monitor in one of several overflow rooms.

At the meeting, Superintendent Silva stated she also had heard from several people directly and based on those conversations, she offered revisions to the original proposal. The modified proposal called for middle school athletics to remain for the 2010-2011 school year. In addition, current Arlington juniors could remain at the school through their graduation in 2011; current sophomores would still need to transfer to other high schools. 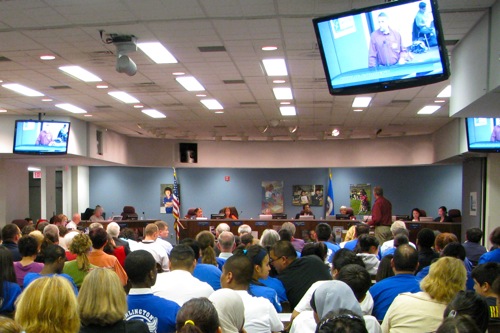 Hundreds of people attended the board meeting, hoping to be heard.

While these modifications eased some families concerns, Silva’s new proposal for band and orchestra programs led to outrage by the residents. Silva stated she wanted to find a way to keep instrumental music in the schools without using general dollars. She proposed to convert itinerant music into an after-school enrichment program. According to Silva, transportation will be provided by the school district for students interested in participating.

“We believe we can have a better and stronger academic program for the students in our school,” Silva said at the meeting.

Similar sentiments were expressed by countless others during the public comment segment that lasted more than three hours. Students, parents and other concerned citizens all patiently waited for their turn to speak.

Jeff Conrad, father of three French Immersion students talked about how school violin lessons have benefited his son. “Music must remain part of curriculum during the day. It helps all disciplines. If they cut music, the entire music program will wither and die,” 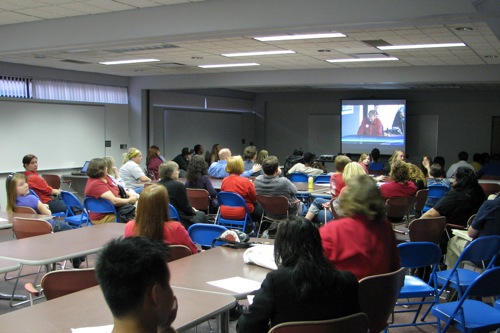 In the overflow room, many people wore red symbolically saying no to cutting music from the schools.

Tuomas Sivula, a 6th grade Capitol Hill student stated making itinerant music an after-school program would create additional problems. “Students will be forced to choose between music and other after-school programs … Parents might choose to enroll children in other districts or private schools where they can get both music and other activities.”

David McGill, a Capitol Hill teacher speaking as a concerned citizen, posed several questions to the board. “What message are you sending to the people of this city, to the children of our school-your children-when you specifically exclude music from the central curriculum? Do you know with this proposal you will forfeit your ability to credibly support the arts in the future?”

People were equally passionate about the proposal to close Arlington High School and co-locate several Eastside elementary schools inside the buildings of other schools further away. One Eastside resident commented the board’s plans for the Eastside is “socially and morally reprehensible” and added, “Why must the Eastside bear the brunt of the city?”

Families from Sheridan Elementary proposed an alternative plan to the board. Rather than co-locate Sheridan in Highwood Hills Elementary,  they suggested moving the students to Ames which is much closer.

“Why does it always have to be the Eastside?” Roshelle Chavez asked the board members. The mother of three grew up on the Eastside. If the changes occur, her 11-year-old son Harley will not graduate from his neighborhood school next year. “It’s very depressing. We put a brand new playground in Sheridan about five years ago. We raised the money. They don’t want neighborhood schools.”

The April 20 school board meeting went on past midnight, and was set to reconvene on Thursday afternoon for additional discussion. According to a St. Paul Public Schools media release, the board approved the following changes before adjourning:

• Itinerant Instrumental Music Program will be provided to students as an Alternative Learning Center Extended Day program. The program will run two days per week after school. Transportation will be available. “This will allow students participating in the program to remain in class during the school day, while allowing them the same amount of time per week dedicated to the music program.”

(Full disclosure: Deb Pleasants is the mother of a child enrolled in St. Paul Public Schools)