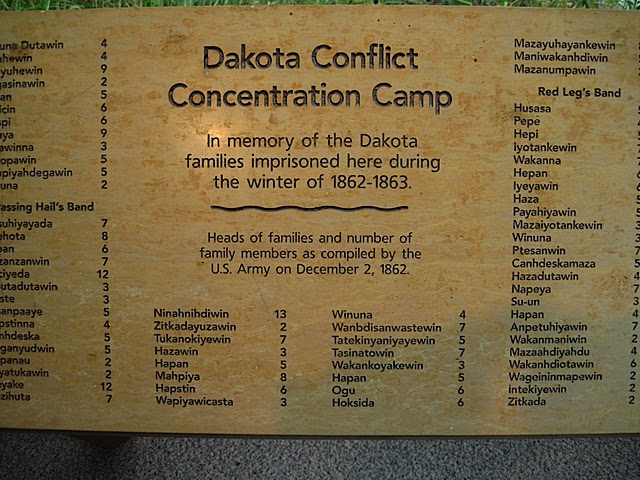 The Minnesota Historical Society doesn't mention the concentration camp on their website’s Brief History Page on Fort Snelling. However, the Visitor Center at Fort Snelling State Park, which is run by the Department of Natural Resources has a memorial for the Dakota who were held at the camp and uses the term “concentration camp.” (Photo by Sheila Regan)

In 1987, on the 125th anniversary of the execution of the Dakota warriors who were hanged at the end of the war, Minnesota’s Governor Rudy Perpich declared a Year of Reconciliation.  A statue, called Winter Warrior was created at the site of the execution, and the remains of the executed men were returned from museums to the Dakota for proper burial.

Naming events and places is a powerful part of history-making, and today’s battles center over both naming and telling the story.

Many historians and activists insist that Fort Snelling was, in fact, a concentration camp for the 1600 Dakotas interned there after the U.S.-Dakota War of 1862. Those interned in the camp were women, children and old men, not combatants. Hundreds died as a result of the cold and abuses, and those who lived were removed from Minnesota in the spring.

In Native Roots: How the Indians Enriched America, Jack Weatherford writes about a picture from the 1862-3 encampment at Fort Snelling:

The tepees seem so traditional, yet the identical appearance of the tepees, neatly arranged with an enclosure, offers a strange glimpse of a form that was to haunt the twentieth century.  The pictures show us the birth of an institution, the beginning of a whole new social practice of concentrating innocent civilians into an area and imprisoning them for protracted periods without charging them with any crime.

The remaining Dakota surrendered. Sibley’s force rounded up 1700 Dakota women, children, and elders and began a forced march from the Lower Sioux Agency to a concentration camp at Fort Snelling. They walked 20 miles a day. Along the way they were subjected to physical and verbal violence by local white people. New Ulm residents poured hot, scalding water over their heads. Many were killed or died from hunger and sickness. …

The remaining Dakota prisoners were treated with brutality. Soldiers held prisoners at Fort Snelling through the winter. The soldiers treated them brutally, violating the women and then killing them. Many people died from disease because of the crowded conditions. Others committed suicide because of the horrors they saw there. Some days soldiers buried as many as 50 people in a mass grave.

The Lower Sioux Agency historical site, which is run by the Minnesota Historical Society, also does not use the term “concentration camp.” Instead, the term “prison camp” is used.   The problem with “prison camp,” is that it implies that the inhabitants of the camp were criminals, which they were not.

At the Lower Sioux Agency Historical Site, which is run by the Lower Sioux Community with funding from Minnesota Historical Society, Anthony Morse provided documentation for changes that were made on the historical markers inside the visitors’ center.  The changes were made, he said, in 2000.

The documents indicate historical information that used to be shown at the site and which now has been removed.  For example, there was information about Major Lawrence Taliaferro, an Indian Agent at Fort Snelling.  Previous signage spoke of Taliaferro’s “sincere interest in the welfare of the Dakota and Chippewa,” who “came to respect his truthfulness.”  The marker read:  “His efforts went far to keep peace on the Minnesota frontier for many years.”

Another marker, about Fort Ridgley, formerly titled “Big Guns Hold the Fort,” then was changed to “The Door to the Valley.”

While efforts have been made in recent years to tell a more balanced story, the old markers, pieces of history themselves, remain. Plans for commemoration of the anniversary in 2012 also focus on story-telling from the point of view of white settlers.

Bob Burgess, from the Brown County Museum in New Ulm, said that the museum is already planning for the 2012 anniversary exhibit. That is not uncommon, as the museum often plans 5-10 years in advance.  Burgess said that the museum will have 40 narratives of white families who survived, whether they left their homes or stayed to defend.   There will also be a Katie Groper walking tour that will lead tourists through sites of the war, telling the story through the eyes of a white child who lived through it.

The exhibit will also feature stories from the Dakota who helped the settlers.

The New Ulm Journal reported that, in February 2009, a group of New Ulm historians and public figures met to discuss ideas for the exhibit and other plans for commemorating the anniversary.  The newspaper stated that at the meeting the participants discussed inclusion of the Dakota community:

Participants repeatedly emphasized they would like to be as inclusive as possible; and that the programming should provide a broad, balanced view of the events – including perspectives that have often been left out of the picture – for example, those of Dakota farmers or Dakota Christians, and also views of the war’s aftermath.

For many years, the U.S.-Dakota War was not called that, but rather the Sioux Uprising.  According to the Sioux Uprising narrative, which still persists, the Dakota people instigated teh war and were responsible for it.  As the 150th anniversary of the U.S. – Dakota war approaches, a number of groups are organizing efforts to make sure that the full story is told.

Last fall, more than 100 Dakota people from Minnesota, Montana, North and South Dakota, Nebraska and Saskatchewan, came together for the 2009 Dakota Nation “We are One” talking circle/conference.  In that conference, open to both Dakota and allies, attendees discussed healing, education and social justice for the Dakota people.  There was also a segment of the conference open only to Dakota tribal members to discuss the future. Participants toured the Dakota concentration camp at Fort Snelling, and also sacred sites in the area.  The organizers plan a similar event this year.

Dakota people do not agree on how discussions should take place and/or what actions should be taken. Waziyatawin said she decided not to attend last year’s conference when she found out that it would take place at Fort Snelling, which she considers an icon of imperialism.  “It was appalling to me that they would choose that place,” she said.  She also said that she was at a different place than some of the organizers, as she is more interested in private discussions, rather than public ones.

“We need a land base,” she said.  “We now own 0.012 percent of Minnesota land.  That is appalling to anybody’s standards.  If Minnesotans want to do something that is meaningful –  that is reparation –  they can start with land return.”

Mankato State University has an online Minnesota history site, with an account of The U.S.-Dakota War that explains the reasons for the war and the attacks on and repression of the Dakota people after the war.

Meanwhile, the Minnesota Historical Society will plan its own way to remember the Sesquicentennial of the U.S.-Dakota War of 1862.  As of the time of writing this article, MHS was seeking a coordinator to oversee plans for the anniversary.