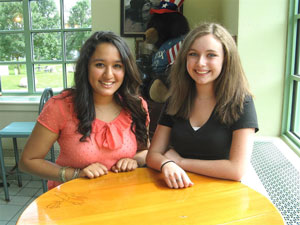 All it took to get an old MGM movie musical going was for Judy Garland or Mickey Rooney to exclaim, “Let’s put on a show!” And that’s pretty much how Como residents Cristina Corrie and Molly Raths got started, too.

Their theater camp for children and teens ages 6 to 18 will bring down the curtain on its third summer with an adaptation of “Oliver!” performed in the Maternity of Mary-St. Andrew’s school auditorium in August.

“This gives us the advantage of knowing how to help the children explore the arts in a way that is both fun and educational,” said Corrie. “We have quite a few children who have repeated, so that makes it easier for us to help them get better.”

One parent who thinks highly of the program is Connie Mattison, a Como resident whose daughter Megan, 10, participated this summer and has been involved since the beginning. “It’s such a great experience for her, so close to home and so much fun,” Mattison said. “Cristina and Molly are very professional.”

It all started a few years ago when Raths was asked by a mother in her neighborhood, just east of Como Lake, if she would be willing to devise some summer activities for kids. She organized skits, including a reading of Dr. Seuss’ Green Eggs and Ham.

In 2010, things became a little more formal, with rehearsals moving into the nearby Corrie family’s back yard and a season-ending performance at Maternity of Mary-St. Andrew’s. That year the play was “Charlie and the Chocolate Factory,” and in 2011 they performed a version of “The Wizard of Oz.” 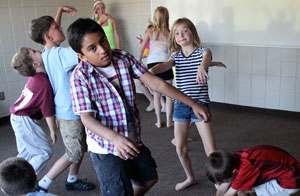 Corrie directs and produces the plays, including the choreography, music and adaptation of the script, and handles marketing. Raths co-directs and is responsible for the organizational side of the operation.

The camp has gotten better each year, they say, with better organization, better performances, better scenery and props. Their friends help with backstage and production chores.

In addition to the artistic side of the endeavor, Corrie is also interested in its business aspects, probably not surprising since her father, Bruce, is dean of the College of Business and Organizational Leadership at Concordia University in St. Paul.

Concordia is a charter sponsor of Next-gen, a fledgling organization with a mission of encouraging entrepreneurship among young people in the African, Latino, Asian and Native American communities. Cristina Corrie said that her participation in the group started her thinking about running the theater camp more like a real business, including charging tuition of $40 for the five-week session.

That’s how iPerform came to be, with Corrie as president and chief executive officer and Raths as chief operating officer. Through a partnership with the City of St. Paul’s Parks and Recreation Department, iPerform was able to use the North Dale Recreation Center for rehearsals this summer and the city handled registration and fee payment online.

Although enrollees can be as old as 18, they have invariably been younger than Corrie and Raths. “Sometimes it’s necessary to give somebody a time out,” Corrie said. “We’re not adults, but we can always tell them that we’ll tell their parents if they don’t behave. They don’t want that to happen.”

Raths said this year’s move from the Corrie backyard into North Dale Rec helped the campers stay more focused because the indoor setting offers fewer distractions. “That doesn’t mean that everything has to be really serious though,” she said. “We want this to be fun too.”

There’s a lot of work involved with the camp, the hardest coming before it starts, Raths said. “But the feedback we get, especially from the parents, is very rewarding.”

Both Cristina’s dad, Bruce, and Molly’s mother, Patrice, say their own involvement in the project has been minimal, because their daughters are so self-directed. “I think it’s been a growth experience for both of them,” said Raths. “I know Molly has developed a lot more self-confidence.”

“Oliver” will be performed on Wednesday, Aug. 8, at 7 p.m. at Maternity of Mary-St. Andrew’s school, 592 Arlington Ave. W. Admission is $5 for children and $8 for adults.What’s next? iPerform Theatre Company will hold a workshop at the Selby Avenue Jazz Fest on Sept. 8.

And to keep tabs on plans for next summer, check out www.iperformtheatre.com.

Roger Bergerson is a freelance journalist and regular contributor to the Park Bugle.