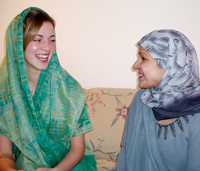 Chiara Kovarik, shown here with Memoona, interviewed women in Pakistan about their lives. She compiled their responses in a new book.

From the outside, it would be easy to mistake Chiara Kovarik’s home for any other in a new townhouse development located a few miles from the Minneapolis–St. Paul airport. And from the outside, it might be easy to mistake the fair-haired high school senior for one of her classmates at the private, all-girls Convent of the Visitation School in her hometown of Mendota Heights.

But a look inside often reveals much more, as Kovarik herself learned at the tender age of 13. It was then, during a month-long vacation to Pakistan—a few weeks before the Sept. 11, 2001 terrorist attacks—that curiosity about the lives of Muslim women she was seeing in the background of family life led to an unusual idea: she would interview them about their hopes as women, as mothers and as Muslims and then write a book about what she learned.

“For the first conversations, I wasn’t thinking of a book at all,” said Kovarik, now 17. “I just wanted to learn more about what I didn’t understand. But I was becoming so passionate about learning their opinions on issues that my dad encouraged me to turn the interviews into a book.”

Despite adolescent distractions such as school, varsity tennis, track, involvement in school leadership and a teenage social life, Kovarik followed through on her plans (with some gentle nudging from her parents when the writing stalled). The result is the newly released 174-page Interviews with Muslim Women of Pakistan, published by Minneapolis-based Syren Book Company. The book features her conversations about the politics and yearnings of 10 Pakistani women, along with chapters on Islam and Pakistan.

A closer look
There’s a hand-knotted Pakistani rug in the entryway of the Kovarik home and a multicultural display of original artwork on the walls. A large original watercolor on bark of three peacocks from Isla Mujeres hangs on the right. On the left is an original watercolor of birds and blossoms, purchased on a boat on the Yangtze River in China. Straight ahead is an original batik painting from Indonesia of a golden Buddha in meditation on a jade throne.

Kovarik is tall and slender and light on her feet as she escorts a guest into a pristine kitchen, where she has brewed a pot of tea and prepared a plate of figs and shortbread. Her father is at work, her mother attending a conference in Japan. As poised and relaxed as a young diplomat, she sits down to discuss how she and the book came to be.

In one respect, Kovarik’s interest in travel seems innate, given her family history. Her father backpacked around Asia after college in the 1970s, working for a time in Indonesia before settling into his current career as a database administrator. Her mother, a cardiologist and director at the Minneapolis Heart Institute, was raised in Italy and arrived in the United States as a single 32-year-old professional with wanderlust.

Kovarik, their only child, had a passport at six weeks old and took her first international trip at six months to meet her maternal family in Italy. Now at age 17, she has been to 22 countries. “I look forward to every trip,” she said. “New foods, sights, clothes. Anything about a new country I find fascinating.”

Many of her friends don’t understand her interest in other cultures. Kovarik is reluctant to compare herself with peers, but her father, Tom, offered his perspective. “Look at books being offered to young women,” he said. “Bookstore shelves are full of books about body image, boys, dealing with mean girls. Is this the only thing teenage girls want to know about?”

Packing for a trip has become as natural to his daughter as going to the mall is for many others, he said. “Many of her friends admire her for her interest in travel but never under any circumstances would they want to go to many of these places themselves.”

Kovarik understands what her friends are missing. During a guided hike to Machu Picchu, she met some of the mountain people of Peru and Bolivia, who subsist on selling handicrafts. “They are very poor, but among the most genuinely happy people I have ever met. Beautiful, loving, giving. There is a radiance of goodness and generosity there,” she said. “It helped me realize how so much here in the U.S. is based on materialistic goals. These extremely poor people I met were 10 times happier than most of the people I know.”

One of her favorite places to visit is Italy. “What I love there is that people are so passionate. They’re in love with everything they do, see, say. It’s not just pasta, it’s PASTA,” she said with gusto and an easy laugh.

Prior to the trip to Pakistan, Kovarik said she knew very little about the religion of Islam or the culture of the predominately Muslim country. Once there she was surprised by what she found. “Most places I’ve been to have been Americanized,” she said, “but Pakistan not at all. I felt immediate culture shock. It was hard for me to acclimate. And I’d gone there with misconceptions that Muslim women are all oppressed and live tortured lives with no rights.”

When reality didn’t mesh with her preconceptions, Kovarik began asking questions. She asked Muslim women what they wished they could convey to Americans about their lives, what changes they would like to see in Pakistani society and how their lives differed from their mothers’ and grandmothers’.

Getting inside
Kovarik also had to overcome a language barrier and her own shyness to talk to the women—often hidden behind veils. Most spoke only Urdu. But Kovarik persisted. “She’s like a bulldog when she finds something she thinks worthy of her time and effort,” her father explained. “She sinks her teeth in and doesn’t give up.”

In one case, male family members who were translating fell into the habit of answering questions themselves. A son warned at the start of the interview that his mother’s answers “would not be of any interest because she had led such a sheltered life.”

Yet as Kovarik discovered and later wrote, “This shy, unassuming, extremely polite woman was brimming with inspirations just waiting to be shared, should anyone take the time to ask her opinions.

Born in 1948, the woman Kovarik calls Lubna responded to each of her young guest’s questions after careful thought, revealing a depth of feelings about religion, the worldwide community, morality and family. As Kovarik wrote, “I realized that no matter how sheltered their lives may appear, women around the world have voices that long to be heard.”

One of the women Kovarik particularly connected with was a 27-year-old woman who had received a degree in electrical engineering in Pakistan and a master’s degree at the University of St. Thomas in St. Paul. Memoona was particularly passionate in talking about misconceptions of Muslim culture she had encountered in the U.S.

“People think that Muslim women do not enjoy life fully since they are covered most of the time and pray every day,” she told Kovarik. “That is most definitely not true. We enjoy our lives as much as anyone else. The teachings of Islam have opened our minds and our hearts, and we are able to love more fully each and every moment of our lives. Suppression does not stem from the Islamic religion. It is some men and some families that suppress some women.”

Embracing differences
Despite her world travels, Kovarik said she still succumbs to the impulse to make quick judgments, just like many of her friends.

“It’s hard not to judge people right away,” she admitted. “I’m still doing work on it for myself, to look beyond the first images.”

She hopes those who read her book will be reminded that the Middle East is not simply a breeding ground for terrorism. The peace-loving women she met and recontacted after the 9/11 attacks were as shocked and horrified as Americans about the terrorism falsely carried out in the name of Allah. “More people in the world need to know that,” Kovarik said.

To that end, in mid-November Kovarik created and led a workshop at the International Peace Conference at St. Thomas on how youth peacemakers can work on behalf of diversity. When she starts college next fall, she intends to pursue a degree in international relations at Georgetown or Stanford, with an eye toward diplomacy.

In the meantime, Kovarik is active in promoting cultural, racial, economic and gender equality as a member of her school’s Students Together and Naturally Diverse (STAND) group. “The goal is not to ignore differences in races and backgrounds or pretend they don’t exist,” she said, “but to embrace them as beautiful aspects of our lives.”