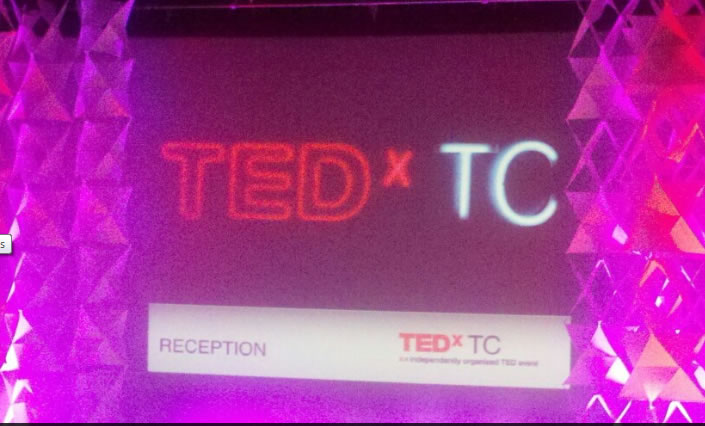 The event began with a livestream from a national event being held in Washington, D.C., and concluded with four onsite speakers. Eve Ensler was the main speaker in D.C. She promoted 1 Billion Rising, a worldwide effort to get one billion demonstrators to rise up and dance on behalf the one billion women worldwide who have been violated and often silenced.

To set the stage, Isatou Touray gave a moving talk on the need to speak out against atrocities against women, especially female genital mutilation (FGM). Having herself gone through ritualistic mutilation under the guises of religion, she was prepared to damn her own daughters to a similar fate, until her husband, a medical doctor, pointed out that it wasn’t religion that spurred such action but a desire to control. Touray went to the Koran and found that indeed not only was FGM not there, but it seemed to run contrary to many of the themes she did find. In 1984, Touray is the Executive Director of Gambia Committee on Traditional Practices Affecting the Health of Women and Children (GAMCOTRAP), a national and international leader in the fight against female genital mutilation (FGM).

Feminist humorist (or fumorist) Kate Clinton explains that there’s power and point of view; those with power get to control the point of view. Meggan Watterson gives an example drawn from a simple but poignant observation of religion in Western cultures; she spoke of the horror that struck her when she realized that while the Bible told stories of women, at no time did it include a woman’s voice. This reinforced messages she had been taught by an abuser: be silent. Ensler observed that it was the silence and the secrecy that allowed violence against women to continue, hence the call for an open, loud celebratory dance.

iO Tillet Wright showed us that familiarity is the gateway drug to empathy with her photography: Self Evident Truths, photos of anyone that felt like they qualified to fall on some part of the LGBTQ spectrum, from bisexual, to transgender. Her goal is to take 10,000 pictures; she’s just completed 2,000. She challenges the public to look into the faces of their neighbors and still consider them second class citizens because of their orientation.

The theme on the stage of the Science Museum of Minnesota emphasized women finding themselves, not in the paradigm of the last century but in a world that permits new definitions, role and responsibilities.

Dori Moliter outlines how the American Dream has changed for women. We no longer need men to define our lives, our health is most important to us yet we find it is important to give back to society. The American Dream was coopted for years by the desire to amass wealth, but as the economy turns we can turn back to life, liberty and the pursuit of happiness.

Janis LaDouceour spoke about how her dream to be an architect connected to her mother’s unmet dream to fly, a dream that was thwarted because of gender. How, she asks, can you ask a little girl to dream smaller than her brother? As women we need to recognize that there’s power in saying “Yes I can” before you’re 100 percent sure you can—then, follow through to the best of your ability.

Futurist Cecily Sommers encourages us to realize that the process of coming to an original idea is available to everyone. The process is to learn, create, and produce. Ideas go from the known to the new. As we learn, we create an internal database of the known. As we create, we tap into that database to produce custom solutions. The key is to forever be learning.

Reverend Canon Peg Chemberlin sends us into the future by assuring us that you belong wherever you are—even if it doesn’t always feel that way to you or to others. We all have a right and a responsibility to be co-producers of the future in front of us.  And that future is shared. What happens to us has an impact on our neighbors across the world. Like families we are related, whether we like it or not.

TED (Technology Entertainment Design) started out as a conference in 1984 dedicated to Ideas Worth Spreading. Now there are two big TED conferences each year (TED and TED Global) and dozens, if not hundreds of mini-conferences across the world called TEDx, or independent organized TED events.

The events themselves are a series of brief talks. Each speaker is given 3-20 minutes to speak. The talks are recorded and posted online, either through the individual TEDx website or the original TED site. This year the Paley Center for Media hosted a TEDx theme: TEDxWomen and The Space Between. They held a live event in Washington DC and invited other TEDx sites to join the effort. Other sites were invited to simulcast talks from Washington DC and host their own speakers on the topic. TEDxTC, the TEDx initiative in the Twin Cities joined the effort.

I’ve been to a number of TEDx (and one TED) events. I find them to be energizing and thought-provoking. To borrow from Cecily Sommers’s and Peg Chemblerin’s talks, I feel like I’ve filled my database a little more and now I’m ready to coproduce the future!