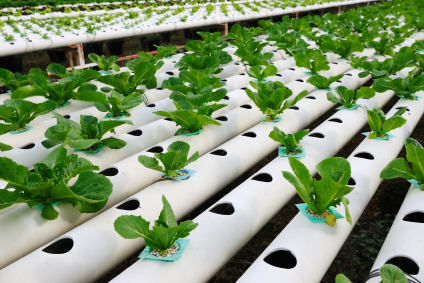 “Tomato King” Jeff Skalicky farms a gravel parking lot, delivers fresh tomatoes to Twin Cities co-ops year-round, and powers his operation with a 40 kW wind turbine. Skalicky is part of a new guard of agriculturalists that uses technology to move beyond the limitations of conventional agriculture. Hydroponics is one of these new technologies that has gained traction quickly.

This is one of a series of stories written by students in the Sustainable Communities class at the University of Minnesota.

Several hydroponics operations grow food in Minnesota: Bushel Boy in Owatonna, Living Water Gardens in Wells, and Tomato King in Albany, just to name a few. Most are only a few years old though their products can be found from Cub Foods to Seward Coop.

Hydroponics is simply growing plants without soil. Capillary action, the process by which a plant’s roots absorb nutrients from the soil, works only when those nutrients are dissolved in water. With the right mixture of water, nutrients and sunlight, plants can grow anywhere.

Hydroponics has been around as a novelty for millennia, but was only developed for agricultural use in the 1970s. In a hydroponic garden, seeds are planted in a soft, permeable substrate to provide stability, and the roots are fed a carefully-regulated liquid nutrient solution. Plants are grown in troughs designed for hydroponics and may be transplanted several times, to maintain high density at each stage of growth, before being ready to harvest.

A primary benefit of hydroponics is that food can be grown close to the point of use, thus lowering the expense and emissions related to transportation. On the other hand, hydroponics is much more energy intensive that traditional agriculture. In order to keep roots hydrated while still being able to breathe, water must be pumped through the system every 15-20 minutes. Some farmers also use supplementary lighting in the off-season when daylight is scarce.

As of yet, there is no organic certification for hydroponic growers. Though many of the growers are committed to using organic inputs, there is no official way for shoppers to be guaranteed of this. Those who buy organic produce because of taste may like hydroponic produce. According to Dean Schladweiler, produce manager at the Wedge Coop, “[Tomato King’s] tomatoes are so good that, if you tell a customer who is dedicated to organic, they’ll think twice.”

Most hydroponic growers spend years perfecting their nutrient solution to make it as close to natural soil as possible. Hydroponic gardens are also less susceptible to pest infestation because they are separated from the surrounding ecosystem. However, hydroponics is still a relatively new technology, and there are likely some parts of the natural growing process we still don’t understand.

During the summer and fall, most hydroponic products have trouble competing on price with local conventional produce, but the farmers make their money back in the winter and spring when vegetables must be shipped in from Mexico and California. Prices of fruits and vegetables normally fluctuate with the seasons. Even during the harvest season, local shortages due to bad weather in growing regions can cause prices to increase all over the world, but hydroponic produce is immune to seasonal changes and bad weather.

For now, hydroponics still represents a small share of produce grown and sold, and questions about health and emissions have not been fully put to rest. Yet they have been steadily gaining ground on conventional produce for the past several years. Snow Aukema, a produce buyer at Seward Coop, sees hydroponics as part of the solution for local foods, and she sees her customers agreeing: “It’s not necessarily because they’re hydroponic. It’s more because they’re local, they’ve been good quality, and they know the product and would prefer it over a Mexico product.”