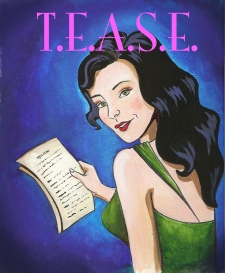 Not that I want to double down on the whole concept of being a tease, but…

I wanted to pimp a new work showcase in which I have a scene being performed on Saturday, July 14 (yes, tomorrow)

But I’ve been told it’s already sold out.  Which, hey, great news!

They are still working on a wait list, though, so if you’re interested, drop them an email at teasetwincities AT gmail DOT com.

Two actors I worked with on Medea and Jason: Rubicon Waltz last fall, Erin Denman and Victoria Pyan, are also regulars at my Tuesday Night Writing Group in the fall months through the spring.  The writing group gets together in each other’s homes every other Tuesday and reads scripts they’ve been working on, be it a speech, a scene, an act or a whole play.  Erin and Victoria liked a lot of the material they’d been hearing and felt like it was a shame more theaters in town didn’t know this group of writers and weren’t being exposed to their work.

So they thought, why don’t we do it?  They asked me if I thought a showcase of short excerpts from a variety of scripts by different local writers was a good idea and I said, heck yeah, go for it, let me know how I can help.

Turns out they didn’t need my help hardly at all.  They worked their connections and found a venue.  They gathered a  lot of their actor and director friends together.  They solicited submissions, read them, made decisions on what to include.  They invited representatives of local theater companies interested in new work.  And presto!  Instant showcase.

I’m very excited to see how it all turned out tomorrow night.

“An evening of new work that will titillate your artistic taste buds.

The Easy Access Script Experience is a rapid fire way to check out new local scripts without the tedious task of dredging through piles of paper.

We have compiled 9 directors and 18 actors to give you a …sneak peek at some of our favorite local playwrights.

Whether you’re looking to fill a hole in your season or for a night out with a party built-in, TEASE, like a short skirt in the wind, will show you just what you want to see.

Looking forward to seeing you there!”

Tickets are only three dollars.

The scripts being teased are…

Tell Laura I Love Her by Valerie Borey

How to Date a Werewolf by Matthew A. Everett

In Congress with the Night by Sam Garber

Woman with a Bat by Heather Meyer

Where’s the Fire By Adam Sharp

Robert in the Bedroom by Cynthia Uhrich