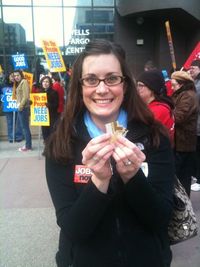 Southeast Minnesota Area Labor Council (SEMALC) field rep Liz McLoone Dybvig held the pieces of her Wells Fargo debit card in her hand as the sixty or so rallying union members, family and friends gathered outside the bank’s branch in downtown Rochester.

Dybvig, who reported paying hundreds in fees to Wells Fargo for routine banking since she opened the account in 2004, closed it as a protest with the intent of banking with a local community bank.

Joined by Minnesota House members Tina Leibling and Paul Thissen, the crowd was part of a larger, national series of protests held at banks that had received TARP funds as part of the federal bank bailout that began under President Bush’s leadership. The Make Wall Street Pay protests took place from March 15 through last Friday.

The national president of the AFL-CIO noted the goal of the protests:

Stop refusing to pay your fair share to restore the jobs you destroyed, stop fighting financial reform and start lending to your communities, small businesses and others starved for credit.

While millions of Americans continue to lose their homes, their jobs and their retirement saving, it’s been business as usual for Wall Street doling out record pay and bonuses to their CEOs.

After the street rally, the crowd marched to the nearby Kahler Hotel, where Thissen, Liebling, former Senator Dayton, and MN AFL-CIO president spoke to the crowd.

Photo: Liz holds the pieces of her rejected card.