U.S. Foodservice made its final offer Thursday to 275 members of Teamsters Local 120, but union leaders anticipate workers will vote Sunday to reject the offer and authorize an immediate strike. Talks between the two sides broke down when U.S. Foodservice insisted Local 120 members pay up to 20 percent of their health care insurance premiums – a steep increase from the previous contract, which expired Thursday. 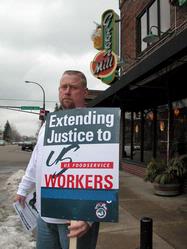 Not only is U.S. Foodservice demanding its workers pay more for their health insurance, the company wants to gut the insurance plan as well, according to Local 120’s Bryan Rademacher.

“The company’s last, best and final offer included significant cuts to the insurance plan, designed to reflect less coverage than what our members currently have right now,” Rademacher said.

Pay more to get less? Not surprisingly, Rademacher and other Local 120 leaders are urging U.S. Foodservice workers to vote against accepting the contract Sunday. If members vote down the contract, they automatically will authorize a strike, which could begin as early as Sunday afternoon.

Rademacher said U.S. Foodservice does not need health-care concessions to remain economically viable. Rather, it is part of a corporate-wide plan to reduce costs.

“They’re making money hand over fist,” Rademacher said. “The company has done this throughout the country, and now they’re looking to do it here. But it isn’t because they can’t pay (the insurance premiums), it’ because they don’t want to pay.”

Rich Fredrick, a driver at U.S. Foodservice for the last 14 years, said he suspects the company is “trying to make up for losses in other divisions on our backs.”

Fredrick and other U.S. Foodservice workers fanned out to restaurants across the metro area, including along Grand Avenue in St. Paul, over the lunch hour Friday. They handed out leaflets to diners warning them of the potential strike.

Dennis Duff, a driver with 25 years experience at U.S. Foodservice, said members of the unit are sticking together despite the company’s attempt to pick off supporters with promises of wage increases – although not nearly large enough to offset the higher insurance premiums.

“There are a lot of people here with families and kids,” Duff said. “People just want to come to work and do their job and get their benefits. We’ve done everything the employer has asked us to do. Why are they doing this to us?

“It hurts because we helped build this company into what it is today.”