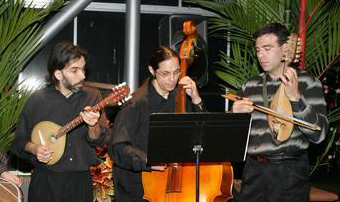 _Editor’s Note: Nickolai Kolarov, a master cellist from Bulgaria, will perorm a solo concert this Sunday at the University of St. Thomas in St. Paul (more info below). Here’s an article about a nailbiter-of-a-concert Kolarov performed recently that provides a revealing look at a remarkable performer – and at the thriving Balkan folk music scene here in the Twin Cities._

It is 11 p.m. when I pull into the parking lot of the student-housing complex. I have a borrowed bass viol in the back of my van, and I’m at least a half-hour late for our meeting, but no matter. Nickolai is still up when I ring the bell, awake and practicing cello for a concert of Shostakovich string quartets he will give in ten days at the University of St. Thomas in Saint Paul, MN.

All preparation for that event, however, is forestalled by my arrival and the delivery of the bass. In just four days time, Nickolai Kolarov will play a concert in a style of music that, though he has heard it throughout his life, he has never before attempted to perform, on an instrument he has never before tried to play.

Trained as a classical cellist, he has but four days to learn to play Bulgarian folk music on the bass viol. There will be just one rehearsal.
The concert we are preparing for is a program of Bulgarian folk music to be given by the Mila Vocal Ensemble, a women’s chorus based in the Twin Cities that specializes in the music of Eastern and Central Europe.

Founded nearly thirty years ago, Mila sings in over 30 languages and is popular among the Balkan, Slavic and Mediterranean communities in the Twin Cities. The chorus strives for authenticity, traveling to study with acknowledged masters in the Balkans while bringing respected Balkan teachers to the Midwest.

Some members of Mila are first- or second-generation immigrants. Others, like me, simply fell in love with the music. I am one of four instrumentalists who will accompany the singers, and have studied this music for a decade. My primary instrument in this setting is the tambura, a Bulgarian long-necked lute.

Eastern European folk music is not exactly a rarity in Minnesota, but it is uncommon. So when you find others who share this interest, you hang on to those connections, sharing resources and skills to develop a community of competent musicians.

Our regular bassist, Peter, an American jazz and bluegrass musician who only last year began his immersion in Bulgarian music, is unavailable for the weekend’s performance. And so we must choose: either identify an interested bassist and initiate him or her to the world of Balkan folk music, or go with Nickolai, who is steeped in the music but has never played the bass.

Our group has decided to go with Option B.

Nickolai is in the U.S. as a doctoral student in classical cello performance at the University of Minnesota. He was born and raised in Sofia, the Bulgarian capitol, where he first learned to play the classical cello.

“Of course, I heard [Bulgarian folk music music]” in Bulgaria, he says. “Always it was on the radio. But really, it was played more in the countryside, so I have never played it. It is more interesting to me now that I am here” in the U.S.

“That is always the way, isn’t it?,” he says. “You see it more clearly once you leave. Folk music is a great Bulgarian treasure! I studied Mozart and Brahms, but I also studied Bulgarian composers — Petko Stainov, Marin Goleminov and others, who used Bulgarian folk music in their work. That is how I first learned to play the rhythms on the cello. Now I will play them on the bass.”

Nickolai arrives at Thursday’s rehearsal with blisters on the index and middle fingers of his right hand, fingers more accustomed to holding the cello’s bow than to the pizzicato plucking of the bass’s much heavier strings. This will not do.

Nickolai begins to learn what I call ‘the way of the bassist’ and wraps the blistered fingers in masking tape. Some of the vocalists snap digital photos of his taped fingers with their cell phones.

With a nod of the head, the musicians launch into the first piece. The music is complex and rhythmically challenging, with fundamental pulses divided across groupings of 7, 11 and even 18 beats. Passages swell and fade with harmonic tensions that do not resolve according to the norms of Western European classical music, and often do not sit immediately comfortably in Western ears.

Nickolai uses both documents to navigate through the pieces. While his left hand, accustomed to the scale-length and positions of the cello, struggles occasionally to find the exact intonation of each note, his rhythm and sense of time do not falter.

Nickolai has arguably the most immediately interesting biograpy of any of the performers. “For 34 years I have played the cello. The double-bass — just four days!”

Providence allows for one additional rehearsal on the day of the performance. Arrangements are revisited briefly, and a set of visual cues determined to facilitate an assortment of rhythmic accents and ritards.

As we are warming up, several visitors to the Walker Art Center sculpture garden, which at this hour is still open to a public likely unaware of the evening’s events, are drawn by the pipe-organ-like sound of the singers, which spirals upward and out onto the surrounding grounds. It is a sound they may never before have heard. They stop to listen. A young woman with a notebook sketches the scene through a glass dividing wall.

The venue, a large solarium, provides sanctuary to a giant fish made of glass tiles and hot glue, as well as several palm trees. The trees, of course, are not native to Minnesota and would not survive without the shelter and support of the atrium. Just as my own interest in this music and these cultures would not flourish without the wealth of diversity here in this city.

Throughout the evening performances, the women of Mila are radiant. Their shimmering harmonies reverberate off the glass walls of the atrium and hang, momentarily suspended, in the air. When the instrumentalists join the singers, the group gathers in a semicircle to better hear one another amid the many echoes in the room.

A trio rises from the audience to form a dance line. Soon others follow. I look over at Nickolai, whose eyes are now focused on the floor, instinctively playing to the feet of the dancers.

_Nickolai Kolarov will perform in a chamber ensemble presenting “BALKANICUS,” a concert of contemporary Balkan chamber music at 7 p.m. Sunday, April 30th, 2006 at the Brady Educational Center Auditorium on the campus of the University of St. Thomas. The concert will feature 20th century works by Bulgarian, Albanian and Slovenian composers. Admission is free._

_To learn more about the Mila Vocal Ensemble and their recently-released CD of Bulgarian folk music, “V Gradinata” (“To the Garden”), please visit www.milavocalensemble.org_