It is mid-July and I’m walking into a Minneapolis hotel to interview Oscar-winning director Davis Guggenheim (An Inconvenient Truth and Gracie, starring his wife, actress Elisabeth Shue) to discuss his newest documentary (or rockumentary), It Might Get Loud. The film, which opens Friday, September 18 at the Lagoon Cinema, features three strikingly original guitarists: Jimmy Page from Led Zeppelin, The Edge from U2, and Jack White from the White Stripes, the Raconteurs and the Dead Weather.

Guggenheim walks out of the hotel restaurant into the lobby with Star Tribune music critic Jon Bream, holding a copy of Bream’s oversized book Whole Lotta Led Zeppelin: The Illustrated History of the Heaviest Band of All Time. He politely shakes Bream’s hand and looks at me with glasses on the bridge of his nose and his dark hair dangling, puts his hand out and says hello. Shaking his hand, I admire Bream’s book. Guggenheim looks at it too and says, “I love Zeppelin, but I think Jon loves them more.”

We sit down at a table in a closed part of a restaurant. Guggenheim sets the book down on the table and he tells me he’s been up since 6 a.m. and I’m around his 7th or 8th interview of the day. He doesn’t look tired—in fact he looks more than ready to discuss his new film.

How did you decide to go with Jimmy Page, the Edge, and Jack White as your subjects?

I think if there were ten different filmmakers, there would be ten different groups that they would pick. I picked them for what I found was interesting. You easily could have picked 20 other guitarists that all of us would have thought were great too—Eddie Van Halen, Eric Clapton—but for some reason I thought these three would go together great. And when you make a movie, casting is everything; the chemistry among the three. I also thought that the three of them were ready to talk. So part of it was, were they willing to open up and tell us their secrets and tell us how they write songs.

So when you approached the project and had all three subjects, did you start filming their separate stories which then led to the three of them meeting in Los Angeles?

I started filming beforehand. I started by just interviewing people like we’re doing right now. I met with Jimmy Page for two days in a hotel room—no crew, just sound—and we would have these long conversations and it would go wherever. You could spend an hour talking about something that didn’t end up in the film. But then he would come back and he’d say something incredible. That was the heart of the film: the person who tells Jimmy Page’s story is Jimmy, and all of that is from those interviews. So once I had those sound interviews, I knew what to shoot. I knew to go to Headley Grange—the famous rehearsal and recording venue in the 60s and 70s where Zeppelin albums Led Zeppelin III, Led Zeppelin IV, and Physical Graffiti were recorded. I know it’s a bit of a backward process, but it worked.

There is a great moment when Page puts on “The Rumble” by Link Wray. Just watching him play air guitar was fascinating.

Just think of how many kids air guitar to Jimmy Page, and there we see him in our movie play air guitar to “The Rumble.” That was pretty cool.

Were you a musician growing up? Did you ever give the guitar a try?

I didn’t. I studied opera. I wanted to be an opera singer, that’s how big of a geek I was. But somewhere along the line my brother brought home U2’s first album, Boy, and my parents were out of town, so he cranked the album up loud to the point where the speakers were about to shatter and I was like, “This is my music.” I’ve been a U2 fan since then.

When you wanted to do this film, was this the first time that you had met all three of them?

Yes, it was. I’m a huge rock fan but I don’t travel in that world at all. I was a little nervous and I had one of these fan moments—I got a little goofy around Edge, Jimmy Page, and Jack. I mean, these are rock stars.

When the film premiered at Toronto in 2008, were all three of them there to see it, or have they not seen it yet?

They all saw it for the first time finished at Toronto. I was very nervous and I had no idea how they would react or feel. 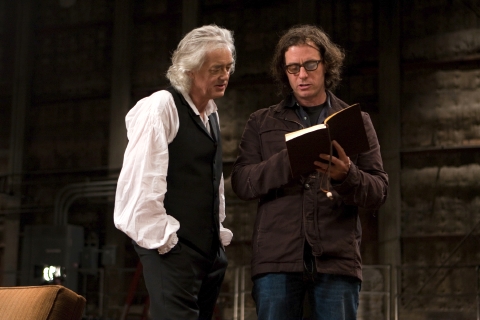 Did they all give their blessing or express how they felt about the film?

I think they are very cautious with their praise. [laughs] But I know that they don’t hate it. I think they know that the audiences love it, it’s a real crowd pleaser. In a theater with the sound cranked up, the audience really has a good time, and as people who are live performers they understood that.

What’s great about It Might Get Loud is that you have three distinct musicians whose music is covered over the course of 50 years. People who are fans of Zeppelin, U2, the White Stripes and the Raconteurs will be able to get into this film. For people who are not fans of these bands, but are casual rock fans, what do you hope they will get out of the film?

My hope is that if you’re not a Zeppelin, U2, or White Stripes fan that you’ll love the movie because many of things said in the movie are universal. Anyone who has any curiosity about what it means to be creative or write a song. To me, it’s fascinating to see how Jimmy Page writes a song and he shows you or how Edge records a song or how Jack White performs a song. People who don’t love the music find a certain fascination with these guys who are searching to be creative. Growing up, you wonder if these guys are different or they have magic dust sprinkled on them. But then you learn about Edge as a teenage kid in Dublin and his thought that anything could happen to him; he said, “I could have been a banker.” And by some weird coincidence he met the other band mates and through tenacity, he became a rock star, he made himself into a songwriter. There is no special ring you put it on that makes you become a rock star, and that’s the thing that’s inspiring to me. If you’re passionate enough and work at it, you can do it.

Wasn’t it a posting that Larry Mullen Jr. put up that attracted the Edge’s attention?

Yeah. The Edge and Larry were 16 at this point, and Larry put up a notice for bandmates and within a couple days, U2 was U2. The Edge even said, “We were really, really bad.”

There is a terrific sequence with Jack White and a young boy who is a splitting image of a younger Jack White. It shows up at the beginning and towards the end of the film. Was this something that you were experimenting with, or was this an idea that came from Jack for the film?

That was all Jack. He came to the set that day and said, “I want to teach myself as a young boy how to play guitar.” I was like, all right. My sense is to go with anything and to give it a try. So Jack comes out of this car dressed with a bowler hat and a bow tie, vest, suit pants with two-toned shoes and out of the back came an 8-year-old boy, dressed exactly the same and he said, “Hey, this is Jack,” and he taught himself to play. I know the audience probably gets what’s going on, but Jack’s got an interesting way of expressing himself. The band that inspired him were the Flat Duo Jets; it was just a drummer and a lead singer with a guitar. They blew him away; he responded to how raw the music was. I saw Jack’s new band, the Dead Weather, play in L.A. last week and his music is raw, no holds barred, and ‘if you don’t like it, I don’t care.’ Now, what bands do you like?

I grew up in a Springsteen household, so I’ve always been a rock fan and my father loves Bruce and has seen him play probably over 30 times. I grew up playing guitar too so I was interested in the process of these three take on the guitar and their craft.

There is a Springsteen moment for me. I went backstage at a Springsteen show in Chicago and Eddie Vedder played with him onstage. After the show, they were talking backstage and I was like, “What are they talking about?” And maybe It Might Get Loud could be like that, meaning I’m not interested in the interview I do with them, I’m interested in what they talked about with each other and what questions they asked each other and how they respond to each other. So with It Might Get Loud, it’s three guys talking, sharing stories, playing their music, and we [the audience] just happen to listen.

How long were the meetings between Jack, Jimmy, and the Edge?

Two days. They were on the stage and I gave them no instructions. I put three chairs, their guitars, and their amps on the stage and I said, “You can do whatever you want.” They asked, “What do you want us to do?” I said, “I’m not going to tell you.”

Do you think they still keep in contact with each other?

Jim Brunzell III (djguamwins@yahoo.com) writes on film for the Daily Planet and hosts KFAI’s Movie Talk. He is film programmer for the Beyond Borders Film Festival and was formerly a programmer for MSPIFF.