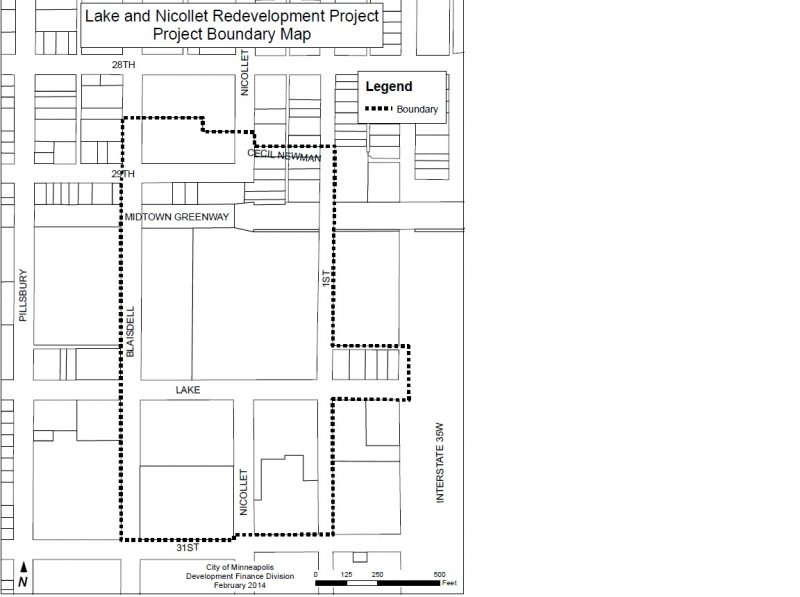 In April the City of Minneapolis took its first formal step towards reopening Nicollet Avenue by creating a Redevelopment Plan for the area around Nicollet and Lake. According to the City the plan’s purpose is to “to facilitate redevelopment activities that support the City of Minneapolis’ goals for the area, including re-opening Nicollet Avenue across Lake Street and the Midtown Greenway, improving access to Interstate I-35W from Lake Street, blight removal and revitalization of the commercial area.”

The plan’s adoption is the next step in the City’s process to reopen Nicollet Avenue. The City is legally required to create a redevelopment plan before it can acquire property in the area. It is important to note that the creation of a plan does not mean that property acquisition will happen or that it is imminent.

Reopening Nicollet Avenue has been a long-standing goal for the City and for the Lyndale Neighborhood Association (LNA). The action taken by the City is a real step towards reopening Nicollet, but it is only one of many that need to happen before any redevelopment would start to take place. A quick summary of what needs to happen before ribbons are cut and dirt is moved:

The City needs to reacquire the right-of-way for Nicollet Avenue on the North side of the Greenway. This may or may not mean acquiring the property.

At some point in the process the City is likely to identify a developer or developers that will take the lead in designing and constructing what gets built in the area around the new street. The City will also need to reconstruct Nicollet Avenue between 29th and Lake Street, including the bridge over the Midtown Greenway.

Unfortunately, there is no timeline for any of this to happen. The City’s negotiations with the interested parties in the area could move along quickly or could drag out for a long time. The issue with reopening Nicollet Avenue is the project is a series of steps that need to be completed, rather than something governed by a start and end date.

The reopening of Nicollet Avenue has been a top priority for LNA for a long-time, which is why LNA took a position supporting the creation of the Redevelopment Plan. To make sure community members’ ideas are at the forefront of this process, LNA had a discussion about what the neighborhood’s priorities should be for the area at the March General Membership meeting.

In general, people supported the City’s priorities spelled out in the Redevelopment Plan. The main things LNA recommended for addition to the plan were:

An explicit objective should include plans for large office spaces that can take advantage of the area’s connection to Minneapolis and the region as a whole and that LNA views the addition of jobs in Lyndale as an important part of creating a sustainable neighborhood.

As the City moves forward and begins the process of acquiring property in the area, we will continue to provide updates through the Lyndale Neighborhood News and online at www.lyndale.org/housing.

For more information you can read: