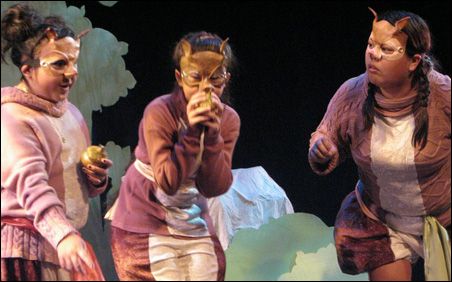 Acting as squirrels in a modern-day fable to teach lessons about using national parks and other public lands are Kaylee Xiong, left, and Malina Moua with Phasoua Vang.

In another sign of our diverse and changing times, Smokey Bear, in a locally produced video being distributed around the country, delivers his famous “only you can prevent wildfires fires” line in — wait for it — Hmong.

As it turns out, the anthropomorphism of animals to teach lessons of American land conservation, outdoor sport and more to Hmong refugees is a great fit for that storytelling culture. (And, given the lasting popularity of America’s iconic bear — first appearing on fire prevention posters in 1944 — the technique works for the rest of us as well.)

The 58-minute DVD production called “Yos Hav Zoov” was written, acted, produced and directed by Hmong Minnesotans mostly speaking in Hmong, but it’s the brainchild of a couple of other Minnesotans.

Project lead was Michele Schermann, a research fellow at the University of Minnesota and a public health nurse with a history of studying the Hmong and helping refugees learn American ways. She collaborated with David Bengston of the Northern Research Station of the U.S. Forest Service, which provided a $30,000 grant to fund the movie project, which features English subtitles.<

Also titled “The Wild Fire and Wilderness Exploration Show,’’ the video uses a variety show format to showcase information about hunting and fishing regulations, seasons and safety practices, for instance, as well as wild fire prevention and plant and wilderness preservation principles.

The Forest Service sees it as a culturally appropriate tool for teaching about both enjoying and being mindful of the responsibilities of using public lands.

Though finished only recently, most of the 2,500 copies have already been distributed in major Hmong population centers, which include Minnesota, California and Wisconsin. There are more than 200,000 people of Hmong ancestry in the United States, with about 50,000 living in Minnesota.

“The Hmong have such a deep connection with the natural environment,’’ says Bengston. “They hunt, fish, gather wild, edible plants much more so than the average population, but there have been challenges because of their learning a new system, especially with elders and new refugees,’’ he says.

The Hmong culture is an outdoor culture, agrees Foung Heu, a Hmong outdoorsman as well as a scriptwriter, videographer and editor for this and other environmental videos. Still there are differences between Hmong and mainstream America, he says. The Hmong — many from Laos — come from a culture that hunts and fishes for food rather than recreation and are learning principles of public conservation.

Especially among its elders, the Hmong often rely more on oral language rather than a written language, so a DVD with audio and video seemed the best teaching approach, the DVD producers decided.

“It’s more effective to be oral in our culture,’’ says Heu, who is also known as Foung Hawj. (He says he used that name when he ran for the Minnesota Senate last year because English-speakers would more likely pronounce his name correctly when it’s spelled that way.)

“This is like ‘Sesame Street,’” says Hue, who’s been producing video for 15 years. Think of the teaching value of Big Bird and Burt and Ernie having a conversation over a letter of the alphabet, he suggests. There are people in costumes and masks, having teaching conversations. It’s a backdrop to the culture’s oral tradition and practice of using Hmong folk tales to make a point, Hue told me. 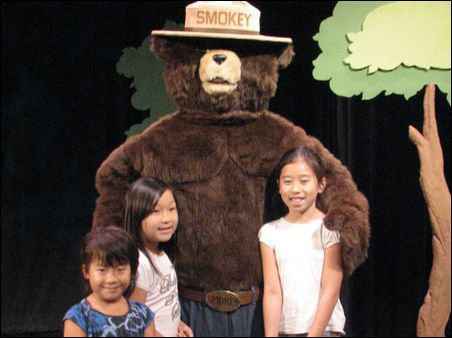 In a new DVD, Smokey Bear speaks Hmong and is here joined by actor Destiny Moua, right, and youger siblings who came to watch the show being videotaped. (Photo by Peter Yang)

For instance, there is a scene where a pair of dying squirrels, injured by a wild fire and halfway to “squirrel paradise,” pause to warn viewers of the danger of throwing a match into the forest, Hue says.

“It’s not like a little kid thing,’’ stresses Schermann, though it is fun to watch for all ages and is flavored with music and humor.

“We have characters telling a story and we’re educating,’’ says actor Tou Thai Lee, 35, who was born in Thailand. Plus, the video is being well received in the Hmong community for its entertainment value and the message to enjoy nature.

Generally, “people’s lack of connection with nature is a growing problem,’’ Bengston says, pointing to a downward trend in visits to national, state and local parks and public lands. That nature connection, he believes, is “an important part of people’s physical and emotional health and well-being.’’