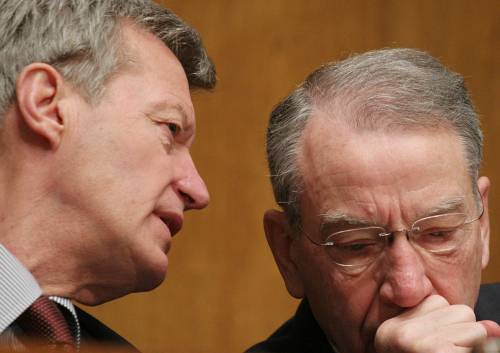 Democrats pushing for a government-backed insurance option as part of their health reform strategy are finding out the hard way that, by taking single payer health care off the table early, they have little leverage now to force a strong public plan.

Unlike the Republicans, who adopted the strong conservative position of resisting almost every Democratic reform proposal from the start, Democratic leaders ruled out the liberal single-payer proposal early in the debate. Now in search of a centrist compromise, GOP leaders have plenty of room to maneuver, while Democrats are left facing proposals that either dilute the public option or eliminate it outright. Indeed, the Senate Finance Committee is expected on Tuesday to unveil long-awaited reform promoting the creation of private health cooperatives, not a public plan.

For many health reform and patient advocates, the developments have been a disappointment. After gaining both the White House and large majorities in Congress this year, the Democrats have made comprehensive health reform their top domestic priority. On the campaign trail last year, then-Sen. Obama came out in enthusiastic support of a strong public insurance option to compete with private insurers as a way to control premium costs, which are skyrocketing. In Congress, Democratic leaders in both chambers also gave clear endorsements to the public option. Even conservative Democratic Sen. Max Baucus (D-Mont.), who chairs the Senate Finance panel, promoted such of plan in a November 2008 policy paper detailing his “vision for health care reform.”

Republicans have adamantly opposed such a plan. But they’ve also had the advantage of knowing for months that Democrats wouldn’t push for anything more liberal. In August of 2008, for example, Obama said that the best option for health reform might indeed be single payer – which would eliminate private insurers in favor of government-backed, Medicare-style insurance designed to provide universal coverage. But he also conceded that it would be too difficult to launch quickly.

“People don’t have time to wait,” he said.

In May, the White House’s top health official told lawmakers that single payer coverage “is not something that the president supports.”

In the House, Democratic leaders held just one hearing this year on single payer, almost as an afterthought. And Baucus, for his part, ignored single-payer supporters until June, when Sen. Bernie Sanders (I-Vt.), the only upper-chamber lawmaker to support single-payer health care, set up a meeting between advocates and the Finance chairman.

The message to Republicans was clear: Single-payer health care would be off the table from the start.

By choosing the public option – not single payer – as the left-most negotiating point, Democrats left themselves with few places to go but toward more conservative proposals for insurance reform, experts say, including the co-op model and a system of triggering public plans only if private insurers fail to meet certain cost and coverage targets. In the blood sport of congressional negotiating – which dictates that you over-ask, and then move toward your goal during the subsequent bartering – Democrats were asking merely for the public plan they wanted in the final bill. The move, some experts say, provided Republicans with greater leverage to fight the public option. Sen. Kent Conrad (D-N.D.), a lead negotiator for the Finance proposal, has said bluntly that a public plan can’t pass the Senate. Even Obama, in a speech on Capitol Hill last week, walked back his support for the proposal by not insisting that it be included in the final reform bill.

Quentin Young, national coordinator with the Physicians for a National Health Program, a single-payer advocate, said greater congressional support for single-payer coverage early on would have given Democrats greater sway to press their public option proposal now in the face of Republican opposition fueled by August’s town-hall protests.

Not that all Democrats are resigned to defeat. House leaders have promised a floor vote on a single payer bill, introduced by Rep. John Conyers (D-Mich.), which has 86 co-sponsors. Young said the vote, the first of its kind, “in a way legitimizes single payer,” which has never had a vote in the chamber despite decades-worth of proposals endorsing it. Young also theorized that Democrats were forcing the single payer vote in order to “put something up to the left of the administration with hopes of pulling some Republicans to the center.”

Julius Hobson, former lobbyist for the American Medical Association and now a senior policy analyst at the Washington law firm Bryan Cave, pointed to another reason that the single-payer vote is significant: It might rally support from some liberal Democrats who are threatening to oppose the final bill if they deem it to be not progressive enough. The vote, Hobson said, “doesn’t allow any of the various factions to say they didn’t get a shot on the floor.”

The comments arrive as the so-called Gang of Six, a bipartisan group of Senate Finance Committee members, continue their slow negotiations in search of a bill that can win support on both sides of the aisle. Baucus told reporters Monday that he expects to unveil the legislation Tuesday. Last week, Baucus released an 18-page draft summary of the bill, which proposed the creation of regional health cooperatives, but no pubic option. Tuesday’s proposal is expected to offer the same.

Some key Republicans, however, are already voicing doubts that the Baucus bill will attract any GOP support.

There remains the possibility that Democrats could somehow ram a public option provision through the Senate. Indeed, Sen. Tom Harkin (D-Iowa), who was recently named to replace the late Sen. Edward Kennedy (D-Mass.) atop the Senate Health, Education, Labor and Pensions Committee, vowed over the weekend that the Democrats’ final bill would include a public option.

“Mark my word – I’m the chairman – it’s going to have a strong public option,” said Harkin, who as recently as this summer reiterated his long-time support for a single-payer system.

Still, following Kennedy’s death, the Democratic majority in the Senate fell to 59, meaning that party leaders will need to entice at least one Republican to defeat an almost certain GOP filibuster. All eyes are on moderate Sen. Olympia Snowe (Maine) as perhaps the most likely Republican to stray from the party line on health reform. Yet over the weekend, Snowe reiterated her opposition to the public option, telling CBS’ “Face the Nation” that “there’s no way to pass a plan that includes the public option.”

Neither single payer nor the public plan are as unpopular among the public as some on Capitol Hill and K Street like to portray. Indeed, a 2007 poll conducted by The Associated Press and Yahoo found that 65 percent of Americans support adoption of “a universal health insurance program in which everyone is covered under a program like Medicare that is run by the government and financed by taxpayers.” A more recent poll, conducted by the Kaiser Family Foundation in July, found that 24 percent of the public “strongly favors” single payer, with another 27 percent “somewhat” favoring the proposal.

Furthermore, a study released Monday by researchers at Mount Sinai School of Medicine found that 63 percent of doctors support the public option, while another 10 percent favor a single payer system that would eliminate private insurers altogether.

Young, who practiced medicine for 61 years before joining Physicians for a National Health Program in 2007, said his group sides squarely with the 10 percent. The public plan wouldn’t accomplish the Democrats’ coverage and cost-containment goals, he said, because it would leave in place the private insurers who “account for virtually all the problems we’re confronting.”

“It’s funny that both the conservative critics and the liberal supporters [of the public option] argue that it’s a stepping stone [to single payer],” he said. “We don’t believe it.”

Mike Lillis is Congress reporter for the Washington Independent.