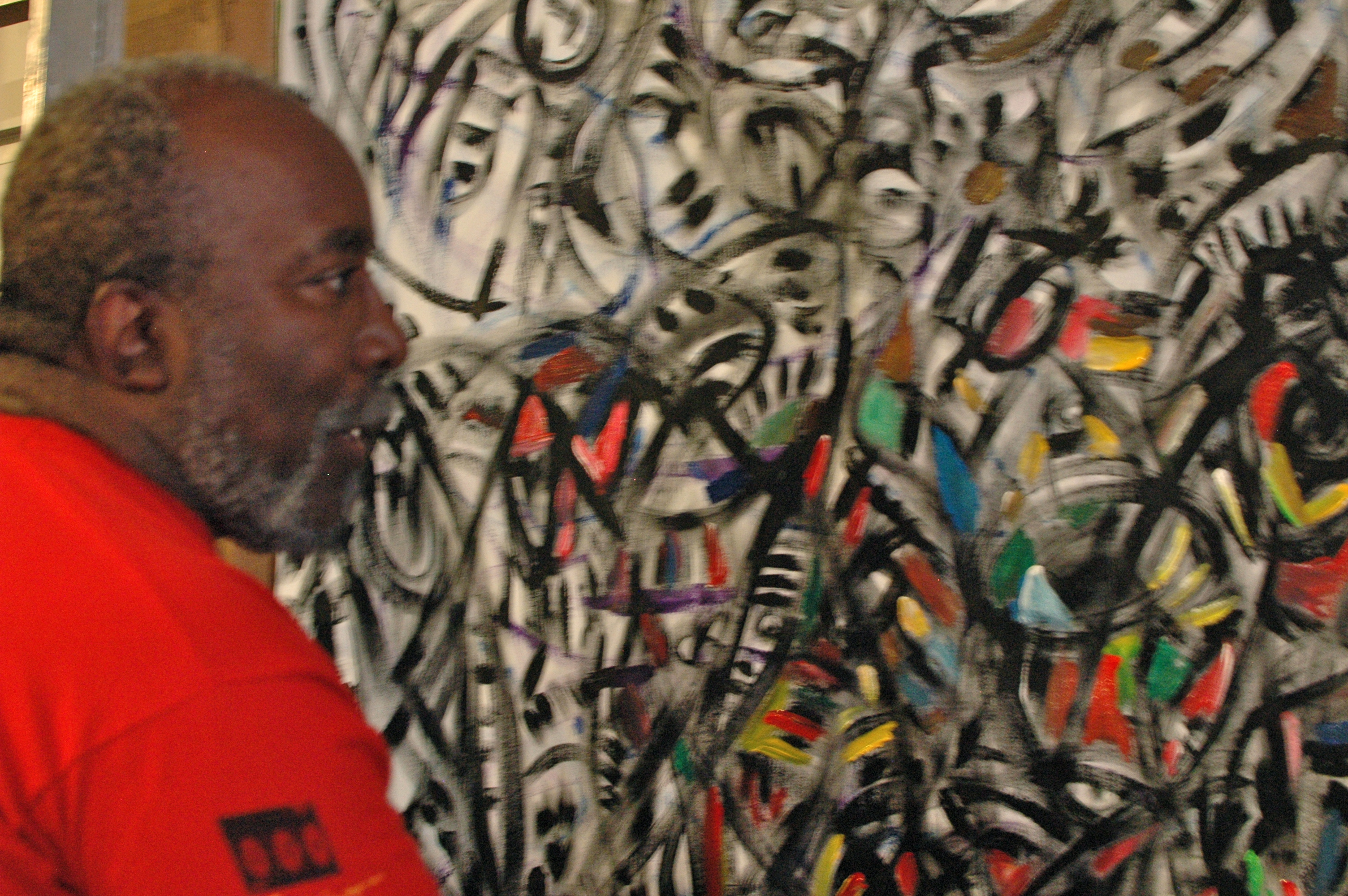 Ta-coumba Aiken can’t see color very well, a rather curious trait for a visual artist known for his vibrant murals and paintings. When he was 11 years old, in 1963, he fell 13 feet on his head. His family couldn’t afford a doctor, but he found out he had a fractured skull.

He almost gave up painting, and yes, he already at that age was already an artist. He had his first exhibition of work when he was six years old. Having started kindergarten at the age of three, he developed an interest in painting early. His father—a garbage collector—was going to throw away all his art work, but his mother—a housekeeper and healer—insisted they have a showing of their son’s work to see if it would sell or not. So they opened up their Evanston, Illinois basement and sure enough, the work sold.

Afterwards, his father said: “You can pay for your own damn law school,” according to Aiken.

But then, when the accident happened when he was eleven, he almost turned away from painting. That was until his mother gave him an ink set. She gave him a bottle, with pen and paper, and sat Aiken down at a kitchen table.

He didn’t want to open it, but his mother insisted. And Aiken started drawing black lines on the paper, creating shadows and patterns. “Things started happening,” Aiken recalls. “I was totally engrossed in making different lines and things. I had a conversation with my ancestors. I have a lot of weird things that happened in my life.”

To this day, Aiken always starts painting in black, adding color afterward, with a palate made of bright primary colors. . “It was a blessing,” he says of the accident. “ What I see I don’t think I would have seen if I kept going the normal way. I wouldn’t have looked.”

On October 18, the public will have the rare opportunity to see Aiken create a work of art- live, accompanied by a musical ensemble featuring New York composer and violinist Jason Kao Hwang. The Breath of Life event is in conjunction with McNally Smith College of Music’s 25th Anniversary and also an exhibition of 20 of Aiken’s paintings.

The Breath of Life event all started with another program, also hosted by McNally Smith, that occurred in February of 2010 called The Art-Inspired Music Project, where nine composers based their music on Minnesota artists’ paintings, photography, sculpture and architecture. The event was curated by McNally Smith faculty member William Franklin.

Aiken says that although he was unable to participate in the Art-Inspired Music Project, he expressed to Franklin that he was interested in participating in it for the second time. However, Franklin replied that he wanted to create a similar event that featured only Aiken along with a group of musicians, rather than featuring multiple visual artists.

“I don’t know what was in his coffee,” Aiken says, but he agreed.

“Improvisational interaction is just my cup of tea,” Aiken says. As he paints in his studio in Lowertown, St. Paul, he listens to the music in his head. And he also listens to the construction outside, dogs parking, people walking throughout the building, all as a kind of symphony.

“I love music,” he says. “I play the drums, a little violin. I had a time when I was singing blues.” At some point, Aiken had to make a choice, whether to get on the road, get his musical chops together, or get a studio and get his painting vocabulary together. “Painting won out,” he says.

But music stayed with him. At the McNally Smith event, he says he might even sing. In any case, he’ll participate in kind of call and response, between his art and the music. “There’s a need for dialogue in this world,” he says. When he was rehearsing with the ensemble of musicians, he said they created a new incantation, an evoking of spirits that came out.

That incantation is present in much of Aiken’s work. “I create my art to heal the souls and hearts of people,” he says. “I have to be a willing participant in creation.”