Ivan Doroschuk of Men Without Hats. Photos by Jay Gabler.

AUSTIN, TEXAS—Around the time that a smiling woman leaned out of the back of a pickup truck and handed me a free ice-cold Monster energy drink, I started to wonder whether I’d make it out of Austin without a donkey tail and ears. It’s a music fan’s Pleasure Island down here, and if Friday wasn’t quite as transcendent for me as Thursday was, it was still a day full of performances to remember.

On my way into town, I pulled over (by which I mean I walked over) to an outdoor stage, where both sides of my driver’s license were examined with great scruplulousness and I was finally admitted to catch an irresistibly retro performance by singer-songwriter Colleen Green, whose tuneful set recalled a range of influences from post-post-punk (think Zuzu’s Petals) to folk (think the Roches). Their merch consisted of seven-inch records and cassette tapes—I considered buying a tape, but I figured given that I never get around to listening to my De La Soul tapes, I probably wouldn’t much listen to Colleen Green’s, either. I did later follow her cartoon-a-day Tumblr. 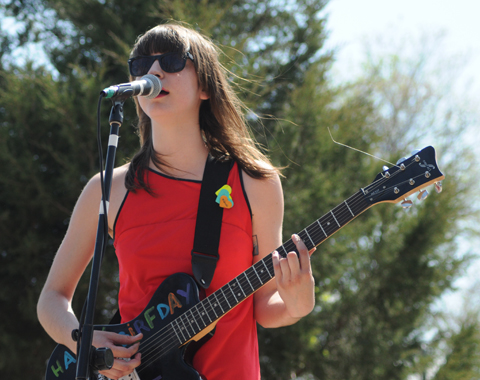 Per SXSW usual, acts were creating their own street-corner showcases. These bros, Slow Motion Centerfold, were playing jazz-funk out of the back of a van. 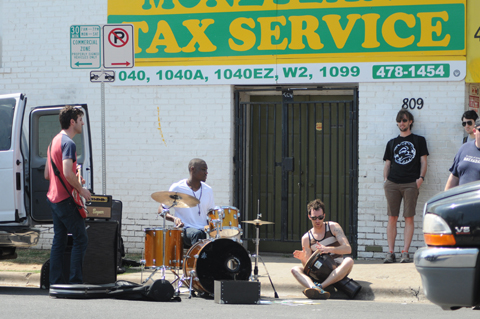 My first planned stop of the day was Skinny’s Ballroom, where First Avenue and the City Pages music blog Gimme Noise were co-sponsoring a showcase of Minnesota artists. The club was almost at capacity—it would quickly fill up entirely—and I said hi to friends as I caught part of Jeremy Messersmith’s set. 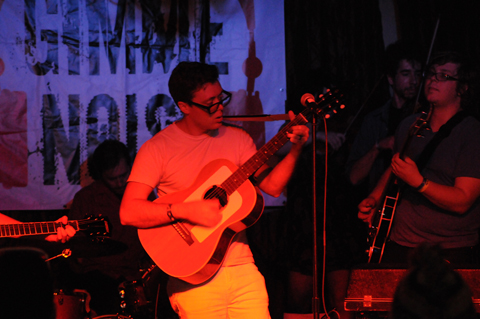 It would have been a treat to stay for the rest of the lineup, but these are artists I’m familiar with and will be able to see again soon, so again I hit the streets. I passed a hair salon where a DJ was playing music; they were offering free beer and discounted haircuts, and since I needed a haircut, I couldn’t resist. “There!” said my stylist. “Now you have a little bit of Austin style.” As I finished my beer, the DJ started rapping. 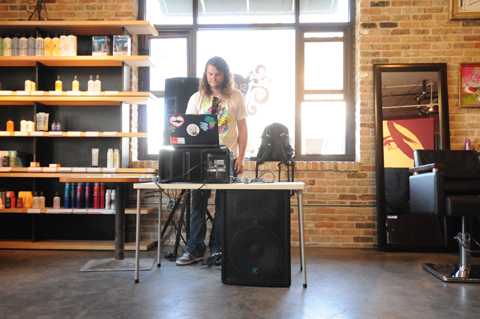 After that classic SXSW moment, I hit a wall. I drifted through downtown, the physical exhaustion of the festival setting in. I collapsed at a table at the Austin Convention Center with an expensive mini-pizza. I texted a couple of friends and learned that they were headed to the Fader Fort, which I’d missed the RSVP for. I knew that my Tangential blogmates were gathering at the Herkimer in Minneapolis for happy hour, and I wished I could teleport there at least for a few hours. But no! This is SXSW, and it was rally time.

I decided to literally play a new card, and I pulled out the PureVolume House guest pass I’d waited half an hour in line for on Wednesday. The PureVolume House turned out to be an all-ages venue serving free Pepsi Max (score!) and hosting, at the moment, a performance by none other than the Sounds, with whom I’d closed out Thursday night. Understandably, singer Maja Ivarsson was complaining about being hung over. 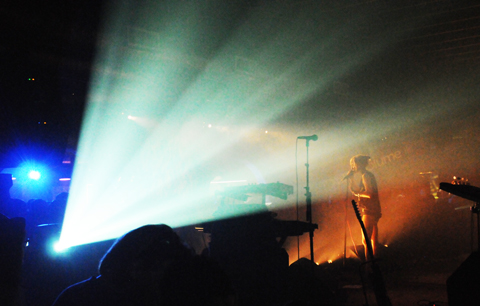 After slamming a couple of Pepsi Maxes (there were three stations where they were being handed out, and there were no lines at the two stations staffed by dudes; to take a Pepsi Max from the cute girl at the third station, people were ten deep), I looked at my RSVPs and decided to give the Austin Museum of Art another try. I walked up to the museum, past the Texas State Capitol. 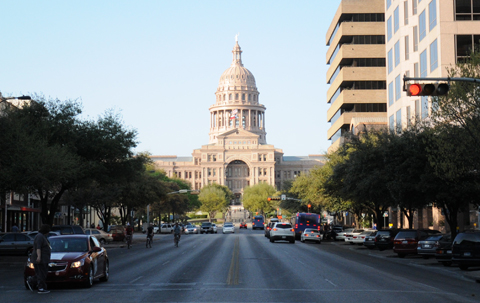 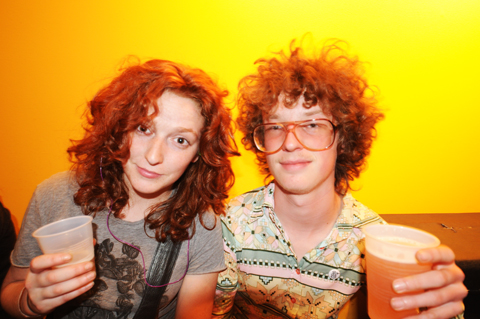 First up were Karkwa, a more-or-less bilingual indie outfit from Montreal. (Frontman Louis-Jean Cormier apologized: “My English is still drunk.”) I enjoyed their set, but was surprised to learn later that these guys I just wandered into a free show by in a museum conference room had won Canada’s 2010 Polaris Prize, beating out Tegan and Sara, Broken Social Scene, Caribou, and other fellow nominees. That’s SXSW for you. 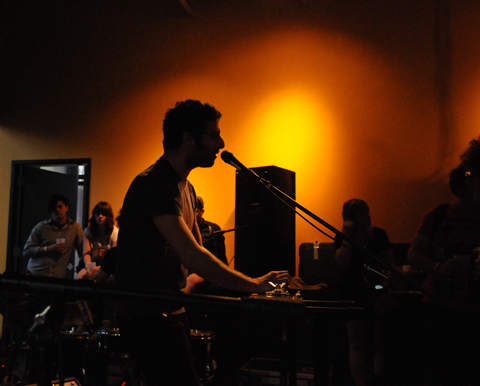 I stayed for the next set, by the shirtless duo King Orchid—one of those acts I appreciated more than actually liked. It seemed appropriate that they’re from Boston, since their furious jams would have fit right in when I was at college in Boston in the mid-1990s. 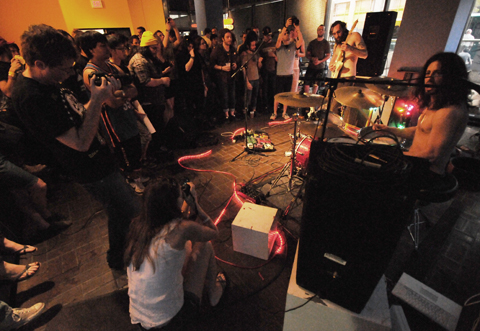 By this point the official showcases were getting started, and I strolled down 6th Street to Momo’s, where Sarah Jaffe—whose album Suburban Nature was one of my favorites of 2010—was slated to play in the second slot on the evening’s bill. Since Momo’s is somewhat off the SXSW beaten path and I didn’t recognize the name of the opener, I figured there would be no line.

I was off by about 100 people, who were already crowding the door. They turned out to be a lot of locals who didn’t have wristbands or badges (for that reason, I was able to jump the line), and who had come out to see the opener: Marco Benevento.

Marco Benevento—I didn’t get any photos, because the place was so packed I couldn’t get anywhere near the stage—took the I Don’t Get the Appeal Award of SXSW 2k11, in a walk-off homer. When I walked in, he was playing 4/4 organ instrumentals that might have come straight out of the Johnny and the Hurricanes playbook; he then moved on to loungy Les-Baxter-style numbers that worked themselves into meandering jams.

I got a beer and offended an Austin local who suggested I rent a bike: I said that I wasn’t sure I’d be comfortable biking to my East Austin crash pad at night. She lives in East Austin, and she bikes all the time. But the cabbies won’t go there—though the majority of local cab companies, my hosts inform me, are owned by East Austin families. Clearly I have a lot to learn about this town. 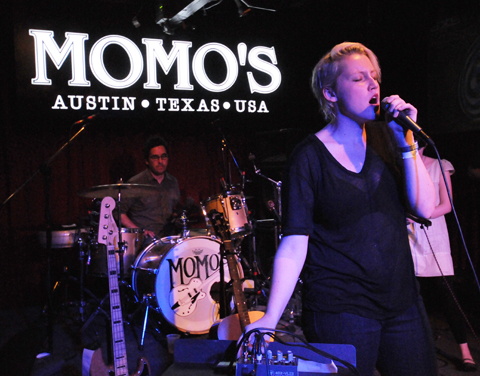 Once Marco Benevento wrapped it up, I enjoyed what I’ve come to think of as “the Bangles effect”—when a huge crowd there to see the act before the one you came to see disappears, and you can walk right up to the front of the stage to see the person you came for. By the time Sarah Jaffe started, the place had filled back up with a crowd of obviously appreciative fans—the kind who shout out, “I love you!” (Yes, Jaffe affirmed, she loves us too.) At such close range, the power of Jaffe’s voice was apparent; while I missed the intimacy of the album (in my experience, shows at SXSW may get close-up, but they don’t really get “intimate”), Jaffe and her band drove songs like “Clementine” home with tremendous force. 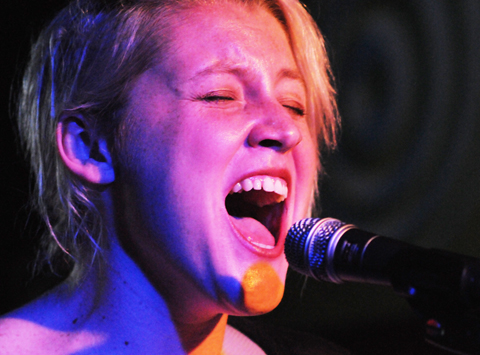 I decided to keep it simple for the rest of the night and made my way across downtown to the Club De Ville, a charmingly ramshackle outdoor venue nestled picturesquely up against a cliff wall. I was there for Men Without Hats and PS I Love You, but I had some work to do first—and by “work,” I mean “sitting through the two preceding acts.” The first band I saw at Club De Ville were Gram Rabbit, who were snazzily costumed (and coiffed) but rocked on unremarkably. 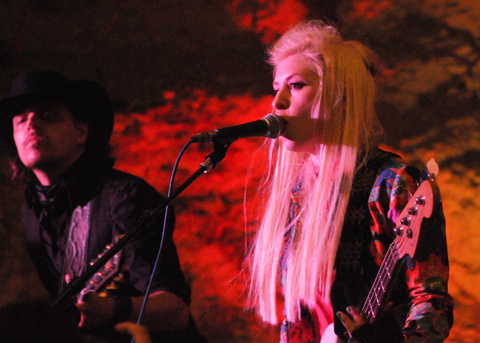 Up next were Candy Golde, a Chicago act who sounded like a perfectly competent bar band—the kind that wouldn’t make you look up from your drink at O’Gara’s Garage. They did, however, earn more points for style. 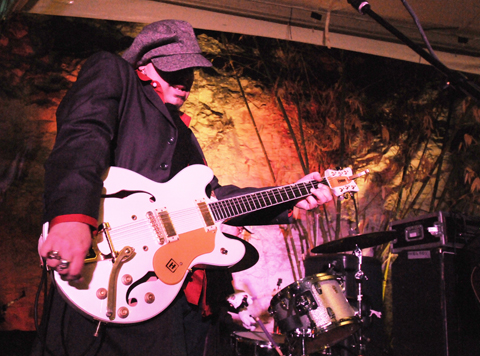 All I knew about PS I Love You is that Last.fm has been recommending their music to me for months, based on my other listening choices. Based on that fact and the band’s name, I expected the band to be an indie-pop trio of Swedish women. But no: PS I Love You is the burly singer-songwriter Paul Saulnier, with a tight drummer. Saulnier’s songs were strong, but what was most memorable about his performance was that he undertook some the fiercest (that’s a compliment) guitar shredding I’ve seen all week. 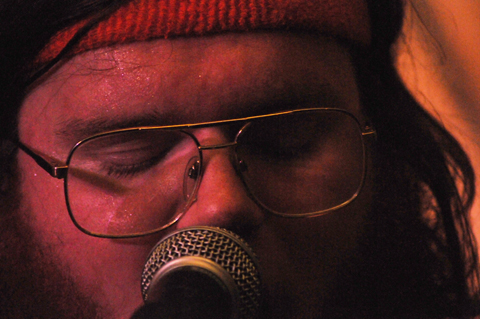 This shot captures the quintessential 2011 SXSW showcase experience: someone taking a photo with a cell phone, someone wielding a high-def video camera, and someone checking the schedule to see who else is playing, all of them sort of half-listening to the buzzband playing three feet away. 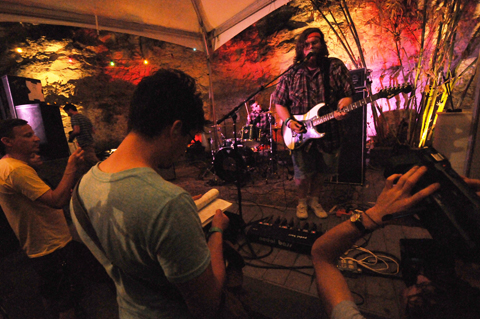 Men Without Hats were one of the oddest acts to appear in the SXSW 2011 showcase listings: a two-hit wonder (“The Safety Dance,” “Pop Goes the World”) from the 1980s who haven’t toured or released an album in 20 years. Their SXSW appearance kicked off a comeback bid of sorts: it was the first show on a—wait for it—”Dance If You Want Tour.”

Even though these are not the Men Without Hats who once knew Top Ten success—the only remaining original member is singer Ivan Doroschuk, who’s now 50 but looking a lot older—I wasn’t about to, given the opportunity, not see them perform live. For several years of my childhood, “The Safety Dance” was my oft-declared Favorite Song of All Time. 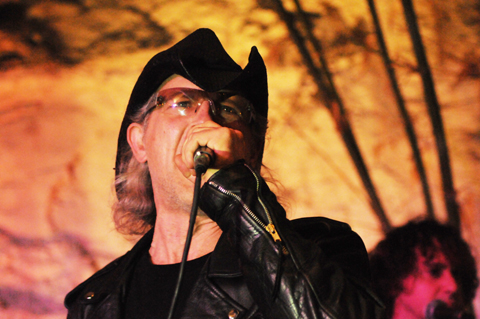 Having hit the commercial rocks in the early 90s with an attempt to expand their sound beyond their synth-driven 80s hits, Men Without Hats are (or, perhaps I should say, the Man With Hat is) back safely in the bosom of the synthesizer, a sound that’s trendy once more. After hearing bands like Chromeo and Estate revive the 1980s sound for the 2010s, it was satisfying to see and hear Doroschuk rock it old school. His voice still sounds great, and when he came to the iconic line, “Everybody look at your hands,” he did indeed—very literally and deliberately—look at his hand. Now that’s entertainment.