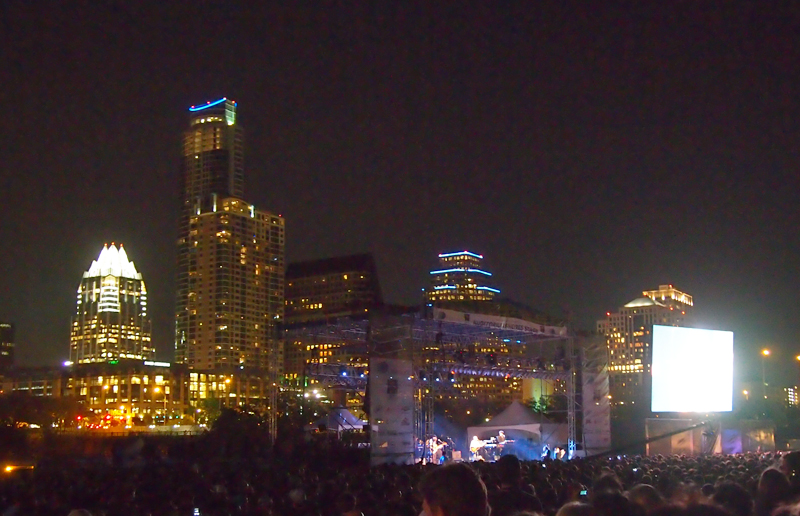 Austin skyline, as seen from Auditorium Shores. Below: Reptar at the Cedar Street Courtyard, the Staves at La Zona Rosa, Luis Banuelos at Halcyon Coffee House, Say Anything at Buffalo Billiards. Photos by Jay Gabler.

AUSTIN, TEXAS—Dana, Adina, and I planned to return to IHOP for another pancake breakfast on our final day at SXSW, but a limo had blocked the driveway between our hotel and the restaurant (what was a limo doing at the Round Rock Red Roof? your guess is as good as ours), so we had to make a two-mile loop around on the I-35 frontage road and before we got back to IHOP, we were seduced by the sweet smells of Cracker Barrel. It was my first experience with a Cracker Barrel: a wholly satisfying, amost entirely irony-free meal.

We parked in East Austin and thoroughly enjoyed a long leisurely stroll down Sixth Street—among the pleasant surprises was an encounter with Twin Cities writer Sally Hedberg. We cut down to Fourth and passed Reptar playing a raucous set at the Cedar Street Courtyard, finally reaching La Zona Rosa, where Warner Music was throwing a boozy bash. Adina went to hang out with a friend and Dana had to get some work done at a nearby coffee shop, so I settled in solo to enjoy sets by We Are Augustines, the Staves, and Crystal Fighters. (Check out my SXSW Day 3 playlist on Spotify to hear all the bands mentioned in this post.)

I was frankly too distracted by the free beer to properly appreciate We Are Augustines, but their 2011 album Rise Ye Sunken Ships is rich and consistent, well-worth a listen. The Staves, an acoustic trio from England who the Guardian aptly describes as “three Laura-Marling-alikes,” were pretty and sleepy. Crystal Fighters, on the other hand, were incredible—the first band in my two years at SXSW who took me from never-heard-of to holy-shit-who-are-these-guys? Not that they’re all guys: the multiple vocalists of both genders are part of the London band’s appeal, as are their effective use of electronics (they may be the first dubstep band I’ve ever heard), their strong multi-part songs, and their incredible live energy. If and when this outfit makes it to your town, don’t miss ’em. 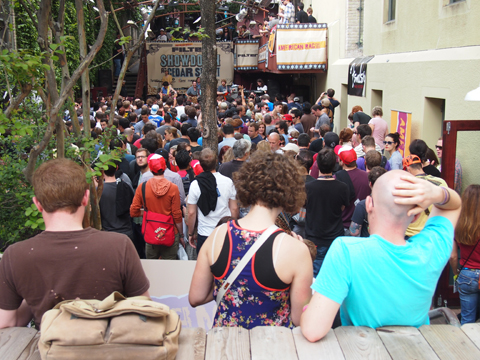 I rejoined Dana and Adina down the street at the packed Halcyon Coffee House, which prides itself on serving generous portions of the three major legal vices: caffeine, alcohol, and nicotine. After recharging physically and electronically, we crossed Lady Bird Lake to the giant outdoor stage where SXSW hosts daily free shows by big-name artists. Unfortunately, on Thursday all three artists’ sets were marred by very poor sound, even by giant-outdoor-stage standards.

First up were Little Hurricane, a San Diego drum-and-guitar duo who might be best described as Black Keys Lite. Next, M. Ward strolled onstage, perhaps glad to feel no awkwardness about donning his trademark sunglasses. There was some awkwardness in mid-set, though, when Ward launched into one of his Monsters of Folk numbers only to find his instrument gone silent. “No keyboard! No guitar!” he fumed as he stalked away leaving technicians to remedy the glitch. The set resumed quickly enough and continued along its mellow course, climaxing with a cover of Chuck Berry’s classic “Roll Over Beethoven.” 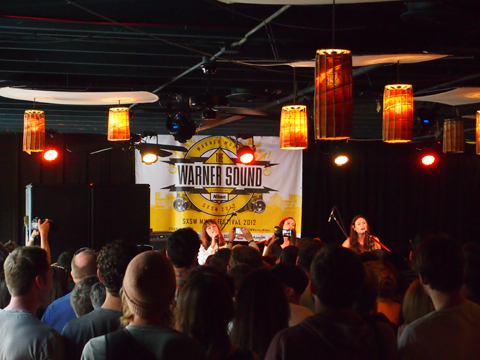 Last up at Auditorium Shores were The Shins, who are on a tour promoting their new album Port of Morrow. The set was underwhelming, but how could it not have been? The quiet folk-poppers played exactly the set I would have expected, and it would have been better-heard at almost any other venue. When the Shins wrapped it up, we shrugged and headed north—well, first we headed east, then Dana pointed out that I was about ready to walk us to Louisiana.

Once again, we learned that the $175 you save in not buying a SXSW wristband costs you access to almost all the big-name showcases. We were denied at the Tenacious D show and found long, non-moving lines for sets by the Temper Trap and Doomtree. We gave Doomtree a shot, and after a local teen waiting in line behind us greeted the news that Dana and Adina were from Mississippi with a slow clap, we got out of that line and made for a showcase headlined by Say Anything. That one we got into. 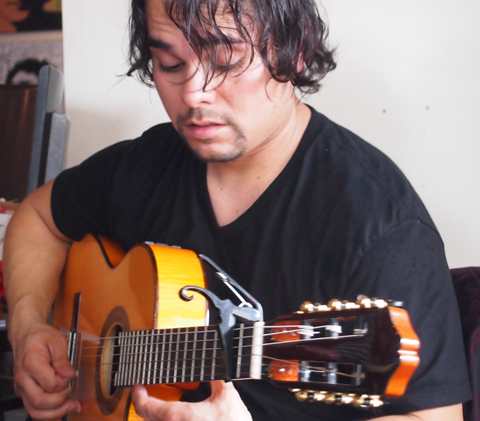 I’d never been to the venue—Buffalo Billiards—and was surprised and delighted to find that it was yet another fantastic Austin rock club. Seriously, how do they do it? That city has no end of great places to see music. The band we were mostly there to see, Futurebirds, were just taking the stage as we arrived, and we enjoyed their barrelling Southern-fried rock. Next up were Lovedrug, whose emotive rock would have fit well on the St. Elmo’s Fire soundtrack; having already revisited the electropop of the 80s, it seems, indie bands are now moving on to 80s rock. Fine by me, especially when it’s done this well.

We were blasted out the door, and out of SXSW 2012, by Say Anything, who are like the Hold Steady—hard-rocking sidemen, unsettlingly manic sing/shouter—but less remitting in their emo-tensity. We walked downstairs temporarily deafened, which was fine: there was nothing left to say.