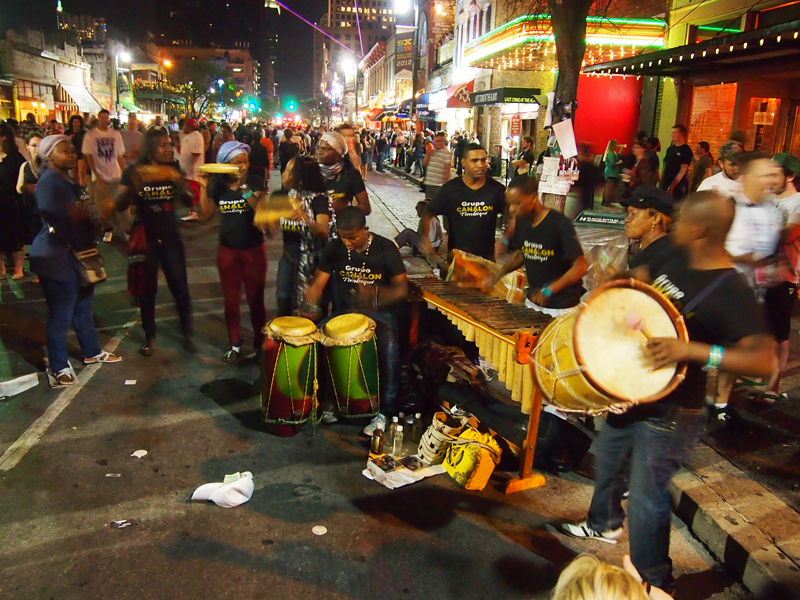 Musicians on Sixth Street. Below: The Stage on Sixth. Photos by Jay Gabler.

AUSTIN, TEXAS—Wednesday at SXSW would end, for Dana and Adina and me, on a genuinely international note, so it was apt that it began on a faux-international note with a hearty breakfast at the IHOP two driveways down from our hotel on I-35 in Round Rock (“the sports capital of Texas”).

After securing a parking spot near the middle of town for $40—which seemed like a reasonable price until Thursday, when we realized that we could park for free just by passing under I-35 into East Austin—we made for the Paste day party, a blowout at the Stage on Sixth. The free gin was about to run out, so we made three quick bar runs and grabbed a table in the main room. (You can follow along at home via my SXSW Day 2 playlist on Spotify.)

We were sorry to catch only the end of a great-sounding set by Typhoon and their most welcome horn section. Once Typhoon’s set ended, we had a good long while to finish our drinks while the venue staff worked furiously to get Apparat‘s complex electronics set up. “Really, it’s a miracle to get all this set up in 20 minutes,” said frontman Sascha Ring, apologizing for a false start. Once the band got going, they delivered a forceful set that belied their chill new album The Devil’s Walk.

Following Apparat were two bands who we talked about for the rest of the trip: Hospitality and Tennis. Both are hot buzzbands with great albums—especially Tennis, whose sophomore set Young & Old is a huge leap forward from their perfectly pleasant debut Cape Dory—but both left us a little bored. Maybe it was SXSW ennui, maybe it was the bands’ nervousness, maybe it was the fact that everyone was tired and distracted and buzzed all at once, but both bands’ sets felt…well, perfunctory.

Ben Kweller, the day’s headliner, was a different story entirely. Having been a young prodigy, at 30 Kweller has the savvy and polish of a road-tested pro without having lost any of his youthful energy. Playing a short set of songs ranging from his new disc Go Fly a Kite to his 2002 breakout Sha Sha, Kweller had the crowd in the palm of his hand. For a final flourish, he jumped up into a window open onto the packed Sixth Street to rip a guitar solo for the benefit of everyone inside and outside the club, then waved goodbye and jumped off the stage. Dana was able to grab Kweller for a few minutes on his way out to thank him for making one of her all-time favorite albums (Sha Sha); if the static sets by Hospitality and Tennis showed the shortcomings of SXSW, the chance to see Ben Kweller—for free!—in close quarters reminded me why people keep coming back to Austin. 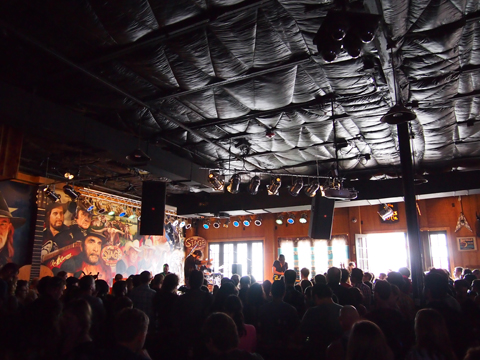 The Paste party over, we snagged a stirfry food-cart dinner and walked up to Stubb’s on Red River Street, hoping to get into the showcase featuring Fiona Apple. It was here that we hit our first non-wristband wall: I got in, but Dana and Adina were stuck in a long line for prospective cash-payers, unlikely to even have the chance to pay the $25 it would have cost them to see Apple and the rest of the star-studded showcase headined by Andrew Bird. So we bailed on Stubb’s, met a few friends, and commenced a short bar crawl.

We first hung out at the Dizzy Rooster, another of the local empire co-owned by Bachelor Brad. There we heard a few songs by the powerful singer Lauren Silva and most of a set by the Continuums, a cock-thrusting quartet who almost made up for the fact that we’d be shut out of the Tenacious D show on Thursday. (Sample Continuums lyric: “Excuse me! You said you need me/ Now you’re saying you don’t want me around/ I came too close, you were pushing me away/ Now my heart’s in the lost and found.”) Things got even worse when we went to Whiskey & Ink for an entire nails-on-chalkboard set by Tucker Jameson. (Sample Tucker Jameson song title: “Charlotte (Don’t Be a Bitch).”)

Having given the locals a shot, it was time to look abroad: specifically, to a Brazilian showcase at Maggie Mae’s, where I used my wristband for the first time in two days and Dana and Adina snuck in for a cool five bucks each. The venue was literally cool inside—and nearly empty, despite being in the middle of the Sixth Street melee. It was everyone else’s loss, as we enjoyed a beautiful set by the duo Tiê, who attracted at least one ballet-dancing superfan.

The last band we saw on Wednesday were Tiê’s fellow Sao Paolians Some Community, who appeared out of nowhere as though they’d been beamed down from the Planet of Ridiculously Good-Looking People Who Are All Virtuosos On Four Different Instruments. The band’s sound was complex, rich, and melodic—but we were fading, and beamed ourselves back to the Red Roof Inn to rest up for our last day in Austin. It was going to be a big one.