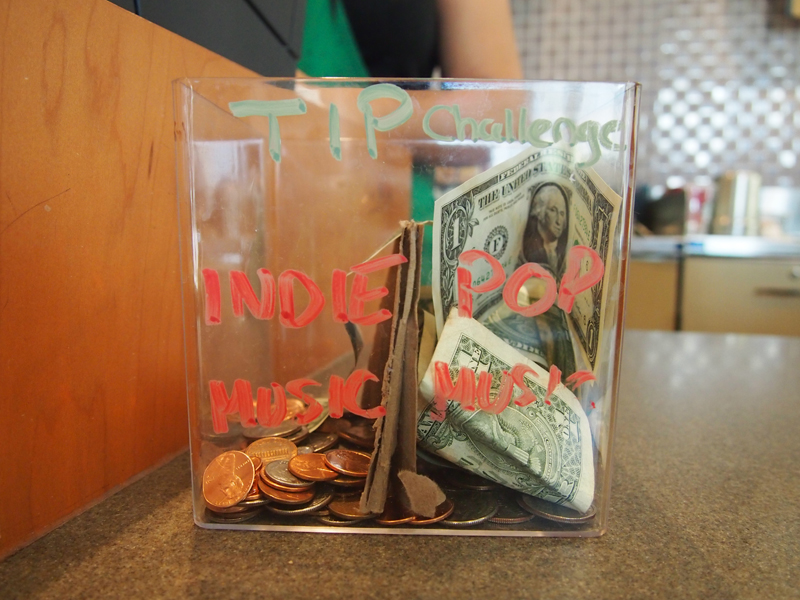 AUSTIN, TEXAS—Last year was my first trip to the South By Southwest (SXSW) Music conference, and I went by the book: the pocket guide to official SXSW showcases, featuring hundreds of bands from around the world. I had an incredible time seeing acts from Yoko Ono to Men Without Hats to Jessie and the Toy Boys, but by the end I was drained and, frankly, kind of lonely.

So this year I took a different approach: I arrived in Austin with my girlfriend Dana and our friend Adina, neither of whom had SXSW wristbands or badges, and the three of us set out to storm SXSW on a low-cash basis. Instead of my full-size Nikon D300S, I packed an Olympus PEN mini-DSLR in my pocket. Three days later, Dana had met one of her musical heros, I’d watched performances as exciting as any I caught last year, and we’d seen a total of 31 music acts for only $20 in cover charges. Not bad.

Our first stop Tuesday morning was the Austin Convention Center, where I picked up my wristband and unlocked a Super Swarm badge on Foursquare while Dana and Adina found coffee and considered our options. We munched free Doritos and decided to do our non-SXSW tourism first. We visited the Texas State Capitol (no cover charge) and downed a couple of tallboys at the Chuggin’ Monkey (also no cover) on Sixth Street. Why the Chuggin’ Monkey? Because it’s one of four Austin bars co-owned by Brad Womack of The Bachelor fame. Despite the bartender’s best efforts (“I have not been able to procure any information regarding the location of said Bachelor,” he declared in the diction of a Coen Brothers character), we didn’t see Brad—and it was getting to be music time.

We settled on a free party being thrown by several sponsors at the beautiful Cedar Street Courtyard, one of my favorite venues in Austin or anywhere despite the fact that, like last year, I ended up in an uncomfortably intimate relationship with an ivy-covered wall. We caught no fewer than nine acts:

• M.T. Bearington, a New Haven band (they must have been right at home amidst all that Ivy) who welcomed us with warm chillwaves.

• South Africa’s Parlotones, whose cuddly-Goth looks and anthemic emo songs harken back to Fall Out Boy.

• The Kopecky Family Band, a sunny lot from Tennessee who assured us that we’re all part of their family and drove the point home by sharing their miscellaneous percussion (maracas for everyone!). It’s safe to say that the KFB have a higher proportion of songs featuring whistling than any other band I’ve ever seen.

• The Lumineers kept the crowd’s attention as much for their ridiculously good looks as for their earnest songs. I’m not going to say the Denver band take themselves too seriously, but I will note that their website says they’ve “found their sound when the world needs it most.”

• The Wandas won our hearts by being from Boston (where Adina and I went to college), by handing out free LPs, and by displaying the kind of sturdy bar-band sound that reminds you of when 80s rockers like George Thorogood planted songs like stakes in the ground. The eponymous album itself sounds surprisingly light and pleasant—quite the opposite of the party’s other freebie, a whopping cheese platter.

• Elk and Boar played from the mezzanine between sets. It was a good idea, and at first the Tacoma duo’s gutbucket sound was welcome. By the end of the evening, though, the bucket-to-gut ratio rose to a tedious level.

• Quiet Life were so bland that headliners Dawes would surely have been distressed to learn what a large proportion of the crowd was genuinely under the impression that the clean-cut Connecticut (of course Connecticut) group were in fact Dawes.

• Whenever I need to demonstrate that I’m not part of the supposedly homogenous bloc of gatekeepers ruling the Twin Cities music scene, I say something bad about Dawes. Minnesota loves the Los Angeles rockers, and they’re certainly lovable: they’re generous and spirited performers who knew what to do when the fiery guitarist Martin Sexton joined them onstage. Dawes’s songs are still a little safe and sunny for my taste, but I have to concede that they played a hell of a set with a passion and professionalism that almost all the other bands I saw at SXSW could learn from.

Check these bands out for yourself on my SXSW Day 1 Spotify playlist. Up next: a three-gin Wednesday.