AUSTIN, TEXAS—My first day at the South By Southwest (SXSW) music festival was dramatic before I even left Minneapolis. On the way to the airport Wednesday morning, my car died, blocking traffic at Franklin and Lyndale. While I called to try to rebook my flight (Delta agent: “What? There are no seats available going in to Austin? What’s going on there?!”), my parents—yes, my parents—jumped into a car together and sped to the rescue. Mom waited with my car for the tow truck to arrive, and Dad raced me to the airport. I just about peed my pants waiting for security, then ran through the airport in my socks and arrived at the gate just as they were preparing to close the doors. “You must be Jason!” chirped the gate agent.

The prospective delay had the welcome effect of making me feel like I was early rather than late—many people attending the music portion of the multimedia conference and festival arrived on Tuesday. So it was with a sense of lucky leisure that I walked towards downtown from my hosts’ East Austin house. As I approached the throbbing heart of the action for my first SXSW, it was clear that the impression I’d gathered from reports was correct: SXSW is like the Minnesota State Fair, except with live music instead of food on a stick. You can make a plan, or you can just drift around and listen to whatever catches your ear, or you can do a combination of both. Bands were playing everywhere from theaters to bars to sidewalks. 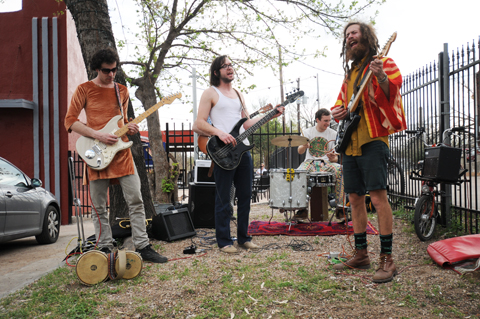 I’d heard Minnesotans were thick as thieves in Austin this week, and sure enough, I hadn’t even made it into downtown before I ran into Paul Hirte of the Minneapolis blog More Cowbell, sitting in a tree. I reached up and shook his hand. “Where are you staying?” I asked him. 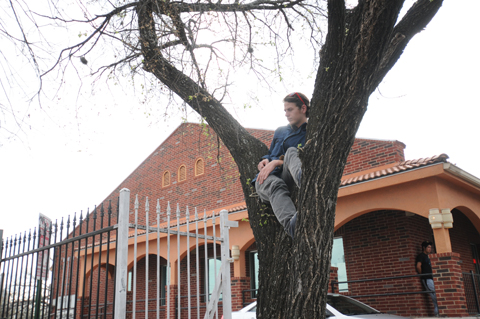 Downtown, several streets are blocked off for the festival. Bars and music venues are so densely concentrated that, having never been to Austin before, it felt like a Renaissance Fair of rock: as if it had been built specifically to hold a sprawling music festival, and to lie dormant the rest of the year. (I’m well aware that’s not the case, and I’m looking forward to visiting the city in the “off season” sometime.) 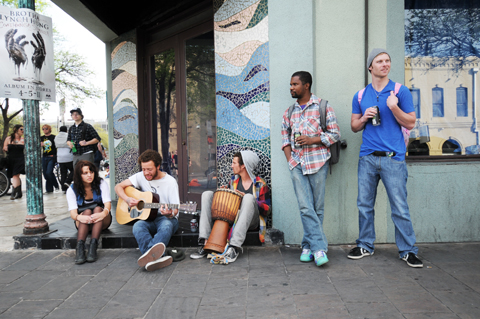 The next step was to check in at the Austin Convention Center, where I was directed through a maze of stanchions to receive my wristband and photo pass. 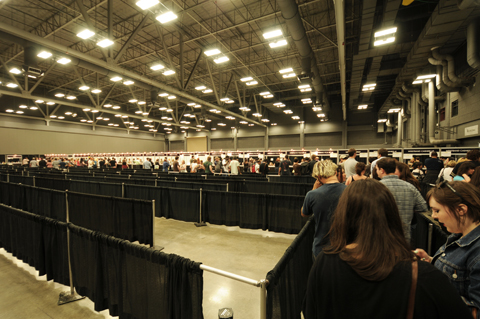 I sat by a wall outlet to check the schedule booklet and juice up my phone (not enough, at it fatefully turned out later that day), and I was off to the races. By this point, everything was crowded, and you literally could not walk down the street without bumping into someone carrying a guitar. 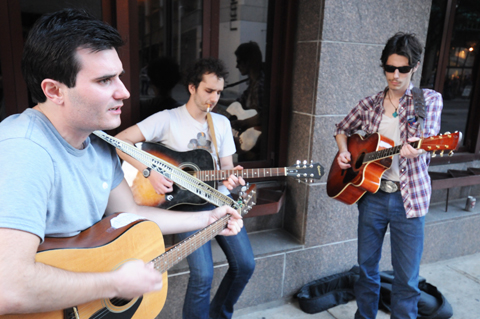 The guide to official showcases is mind-boggling. When people asked me before SXSW what bands I was most excited to see, I said, “All of them—they’ll all be there.” If that wasn’t literally true, it seemed true. At official performances alone (never mind the unofficial parties and shows), there are hundreds of acts vying for the attention of the music insiders and superfans who converge on Austin each year. 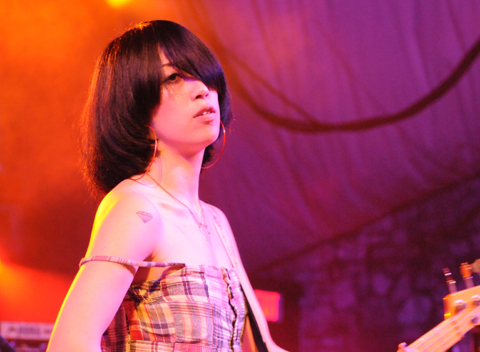 I decided to start at Stubb’s, which had an amazing lineup ranging from up-and-coming acts even some of this crowd hadn’t heard of (I saw multiple people on their phones Googling “James Blake”) to—wait for it—Duran Duran. I squeezed into the crowded photo pit for the evening’s opener, Yuck (photos above and below). The stone-faced UK indie rockers played music that was alternately anthemic and plodding. Given Kyle Matteson’s Daily Planet review of the recent Cold War Kids show at First Avenue, I could see Yuck being the Cold War Kids of 2016. 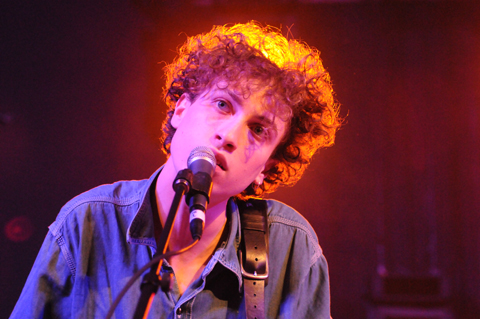 Between acts, I grabbed some distinctive promo swag, in the form of a roll of toilet paper, from the publication that sponsored the Stubb’s showcase. 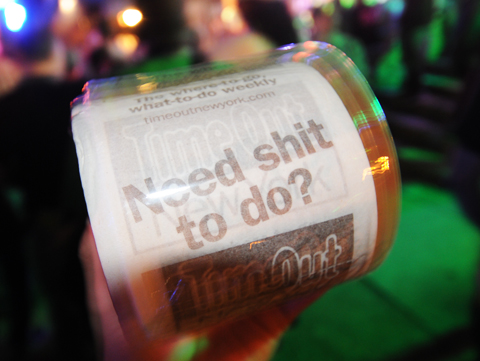 Next up was UK electronic musician James Blake, who recently surprised Minneapolis music fans by quickly selling out his upcoming show at the 7th Street Entry. It was in waiting for Blake to go on that I realized how much of my time at SXSW would be spent watching soundchecks. With several acts playing each night at each venue, the staff are focused and slightly frantic as they try to set up each musician’s gear and keep the shows on schedule. With so much at stake—these are some of the most influential ears they’ll play for all year—the acts want to be absolutely sure they sound good. The James Blake soundcheck went on for so long that Blake had to apologize to the crowd and cut three songs from his planned set. 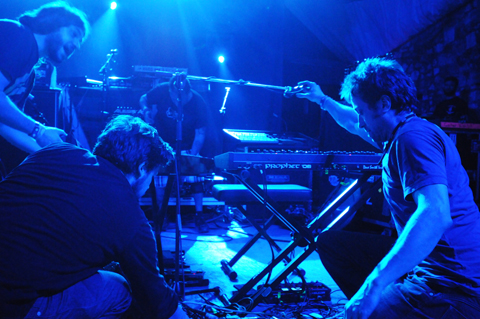 When Blake finally did take the stage, the low-key Bieber-haired heartthrob wowed the crowd with his atmospheric, ultrabassed slow jams. If Blake were to play the lush Varsity Theater in Minneapolis instead of the Entry, I can guarantee you there would be babies made on the mezzanine. 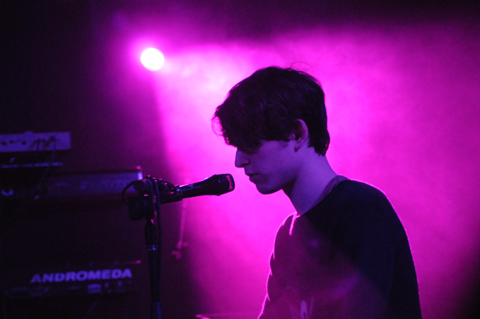 My plan had been to stay for the Smith Westerns, Raphael Saadiq, and Duran Duran, but my Minnesotan-turned-Wisconsinite friend Leslie Kruempel grabbed my sleeve and told me that the Minneapolis-based supergroup Gayngs were playing a surprise show down the street at the Red 7, so in the spirit of keeping it moving I headed out with her. We just caught the tail end of Gayngs’ performance; it was strange to see all those familiar faces playing at the barely-lit back bar of a divey joint in Texas instead of at First Avenue, but it was welcome to see the very enthusiastic reception they were earning from the packed crowd. 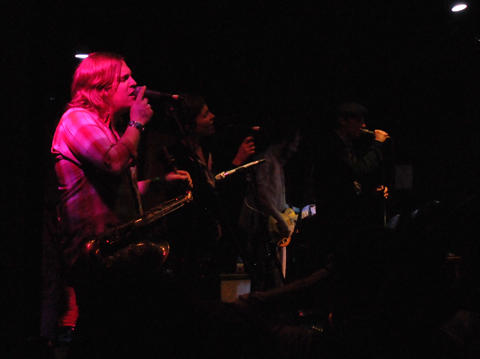 Inside the bar, I elbowed my way to the front of the crowd for the beginning of a set by Montreal band Little Scream. The band looked like they were ready to have a lot of fun—and they did, though their prog-tinged indie rock didn’t do much for me. 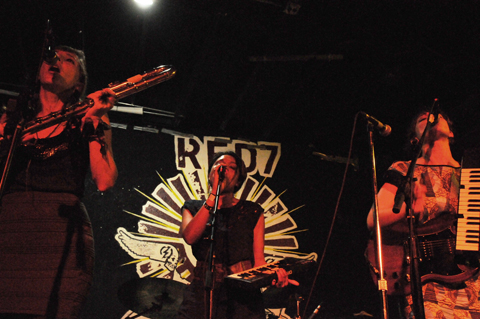 Leslie and I left for Emo’s, hoping to see the Black Lips and Talib Kweli. It was there, though, that I ran into my first mobility restriction. There are three tiers of access at the SXSW music showcases: badges, wristbands, and the general public. Badge- and wristband-holders can enter any venue without charge, but when it starts to fill up, badge-holders are admitted before wristband-holders, and last of all come the general public, who can pay cash (in the range of $15) to enter. By 10 p.m. at Emo’s, only badgeholders were getting in without a long wait; since Leslie had a badge, I told her to go ahead and enjoy the show, and I walked back to 6th Street to indulge one of my great not-so-guilty pleasures: female British electropop. As I’d guessed, there was no line at the Bat Bar, and I treated myself to a tasty Austin Amber while I listened to the unremarkably surging sounds of Clock Opera. 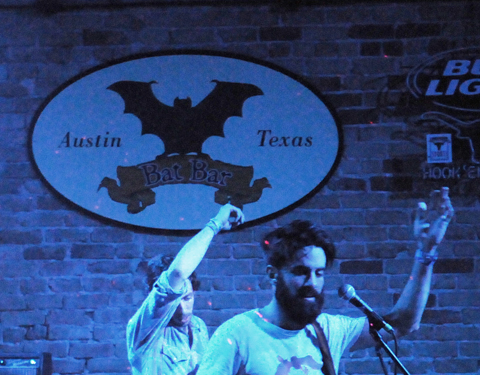 Yes, Clock Opera are British—but no, they are not female electropoppers. I was really there to see Ellie Goulding, of whom I’d become aware when I learned that she’d beat Marina and the Diamonds—a favorite of mine—for the top slot in the 2010 Sound of… UK music industry poll meant to identify up-and-coming stars. Clearly a lot of Austin got the memo, since by Goulding’s midnight appearance the Bat Bar was packed with very enthusiastic fans. When Goulding squeezed her way to the front of the stage, the crowd—mostly young women, including an exchange student from Scotland (she’d introduced herself to me) who kept pumping her fist in the air and yelling “Scotland!” Goulding is from Hereford, but whatever. 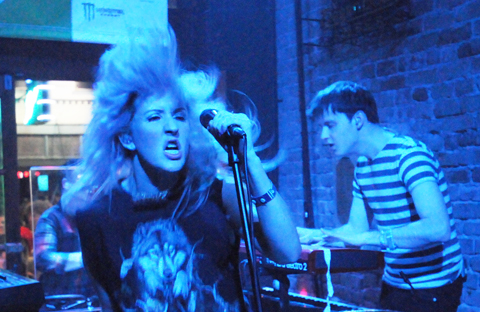 As I expected she would, Goulding played that little bar like it was Wembley Stadium, dancing wildly around, banging away on her personal drum, and leaning out—all two inches out—to touch the crowd. (When Goulding leaned out over the crowd, a girl wanting to touch the singer steamrolled me from behind like I was mugging her grandmother.) Goulding’s shamelessly melodic material sounded even stronger live than it does on record, and I’m excited to see her play a full set on March 31 at the Fine Line in Minneapolis. 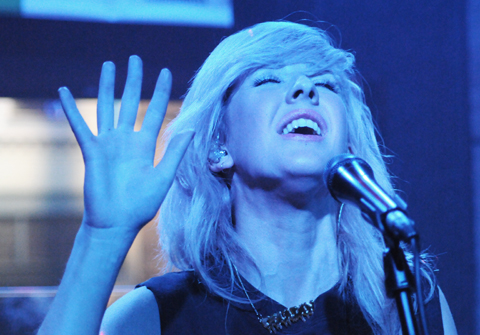 After Goulding’s fantastic set, I was ready to call it a night. Further complications ensued, however, when I discovered that cabbies were not enthusiastic about driving to the East Austin house where I’m staying—it’s regarded as “the wrong side of town.” The first cabbie quoted me an exorbitant fee, the second one refused to drive to East Austin at all, and the third agreed to drive me but, saying he rarely went there, didn’t know how to get to the address. I used my iPhone’s GPS to generate directions and we were on our way…until, just before a crucial turn, my phone battery died.

We pulled over, the cabbie grumbling about what a bad neighborhood we were in and digging in the back of the cab for his own GPS. While he was trying to get it to work, my door opened and there stood a drunk man asking to share my cab. A thug from the ‘hood? Nope, a hipster-looking guy with a SXSW wristband. He didn’t seem to be in good shape, so I tried to shrug him off.

Cabbie: “This is my passenger. I am taking him to his destination. Please go.”

Cabbie: “I call the police!”

At this point, the cabbie and the hipster had a shouting match that resulted in the cabbie getting in the car and driving off in no particular direction—since we still didn’t know where we were going. “I told you!” he stormed. “This is a bad neighborhood!”

Since his own GPS was non-functional, the cabbie dug out an iPhone charger and we had to drive in circles while my phone sucked enough juice to function. (Cabbie: “I want to help you, sir, but I am losing money!” Me: “I’m sorry. The meter is running, and I’ll pay the fare.” Cabbie: “This is why I don’t go to this neighborhood!”) Finally the phone turned on, I got the directions, and we made it to the house.

I’m about to head out for today’s action. How will I get home tonight? We’ll cross that bridge when we come to it. Such is SXSW.